Durham author Jay Posey has written stories for a living for a while now; Tom Clancy gets his name on the cover of the game box, though. Posey got his own cover treatment yesterday, however, as his debut novel, the post-apocalyptic-set Three, the first in his Legends of the Duskwalker series set to be published by Angry Robot Books. Here, Posey writes about the help and encouragement along the way to getting past attacks of self-doubt and all the way to “The End”. 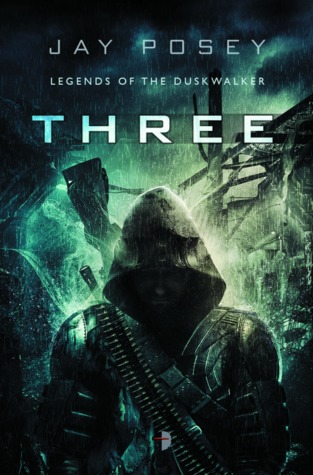 It probably comes as little surprise, but for me, being a first-time novelist, the hardest part of writing Three was believing in it enough to actually finish it.

By the time I started working on Three, I’d already written a number of screenplays, short stories, and video games, so I was no stranger to the hard work that it takes to finish a story.  But by that time, I’d also seen a number of much-beloved projects vanish into the ether without any discernible effect on the world or my bank account.  Looking around, there wasn’t really any reason to believe this work was going to be any different.

There were many times over the course of writing where I lost my way, when I told myself that even if I finished this novel no one would care, it would never amount to anything, that I was a terrible hack, and plenty of other self-defeating things. Sacrifices had to be made to carve out that writing time, and most of the time it didn’t seem worth it.

But there were two saving graces over that long process.  First off, I’m extremely blessed with a great family and supportive friends who were willing to cheer me on even when I didn’t see much point in sticking with it.  There was encouragement without condemnation, and plenty of patience with the Mr. Grumpypants Precious Snowflake Misunderstood Artiste that showed up around the house from time to time.  (Maybe most of the time.)  There was grace for the many missed self-imposed deadlines.  And I had a good friend who was willing to read each chapter of the manuscript as I completed it, and who was also kind enough to continually demand the next chapter until I actually delivered it.

It may also have helped that I specifically chose Three for the sole purpose of proving to myself that I actually could finish something. I’d spent several years working on my Epic Fantasy Trilogy off and on, convinced that it would surely be my ultimate masterpiece. But I’d never been able to get it to a point where I felt like I was achieving my vision for it. After some honest soul-searching, I realized that I just wasn’t a good enough writer yet to tell the story I wanted to tell in that world. So, I decided to set that story aside and pick one of my other many ideas to work on, one that I “didn’t care as much about”. I told myself the only goal for the novel was to finish it.

Of course, as I worked on Three, I came to care about it very much, which sort of started me down the same road I’d been on with the Epic Fantasy Trilogy … I started to convince myself that even if I did finish it, it’d never be what I wanted it to be. But I stuck with it, thanks to a lot of helping hands who wouldn’t let me quit.

It’s strange to be a writer who sometimes dreads writing. It’s sobering to recognize that sometimes you’re your own worst enemy.

And it’s invaluable to surround yourself with people who believe in your dream so much that they’ll keep the faith even when you can’t.

Jay Posey is a narrative designer, author, and screenwriter.  Currently employed as Senior Narrative Designer at Red Storm Entertainment, he’s spent about 8 years writing and designing for Tom Clancy’s award-winning Ghost Recon and Rainbow Six franchises.  He started in the video game industry in 1998, and has been writing professionally for over a decade.

This entry was posted in The Hardest Part and tagged jay posey. Bookmark the permalink.