Friday, November 15, 2013: All recovered from NC Comicon last weekend? While in the Triangle the sole event this weekend is the Ed Piskor (Hip Hop Family Tree) Chapel Hill Comics signing on Saturday, for folks further West, Steve Long is among those heading to MACE, “The Carolinas’ Best Gaming Con”, in Charlotte this weekend, which boasts Paizo Publishing’s Jason Bulmahn along with a trio from Pinnacle Entertainment Group as its guests of honor, and also involves Davey Beauchamp, so there is a high likelihood of some manner of shenanigans.

Meanwhile in local news, Mur Lafferty’s novel The Shambling Guide to New York City was nominated for Best Urban Fantasy Novel of 2013 by RT Book Reviews! and! in news that should delight both fans of Princeless and My Little Pony, local writer Jeremy Whitley was tabbed to write issue 2 of new 2014 IDW title My Little Pony: Friends Forever. More details: “(W) Jeremy Whitley (A) Tony Fleecs (CA) Amy Mebberson — The Cutie Mark Crusaders have done everything they can think of to get their cutie marks. But there’s one creature of chaos who might have some ideas they would never think of… Discord! When our pint-sized heroines start working with the unpredictable trickster, the results are bound to get unusual! Will Ponyville be able to survive their friendship? In Shops 2/14. Preorder in December!”

Lastly, there’s just 3 days to go in Bull Spec art director Gabe Dunston’s Kickstarter for his graphic novel Purgatory Pub, and he’s just $800 short of his $3500 goal. I’ve had the chance to work with Gabe on a few projects now, and this guy: 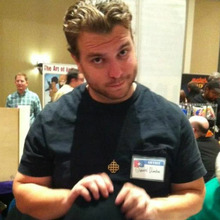 Is a guy you can trust to deliver the goods as promised. Best of luck, Gabe, in pushing over the finish line, and I look forward to checking out book one!

15-17 (Friday to Sunday) — MACE, “The Carolinas’ Best Gaming Con”, in Charlotte this weekend, which boasts Paizo Publishing’s Jason Bulmahn along with a trio from Pinnacle Entertainment Group as its guests of honor, and also involves Davey Beauchamp, so there is a high likelihood of some manner of shenanigans.

22 (Friday) — UNC’s Morehead Planetarium hosts a science education benefit, The Jupiter Ball. “The Jupiter Ball is a benefit gala for Morehead Planetarium and Science Center supporting science education for North Carolina schoolchildren. We are thrilled to announce that Dr. William E. Thornton, North Carolina’s first astronaut, will be our honored guest for the 2013 Jupiter Ball. As a member of the Skylab support crew, a veteran of two space flights on the shuttle Challenger and a holder of more than 35 patents, Dr. Thornton fully understands the importance of inspiration and innovation.” More info: http://moreheadplanetarium.org/index.cfm?fuseaction=page&filename=jupiter_ball.html

[As always check the latest newsletter for the full list of events and such.]