Paul Kincaid’s From the Other Side, March 2015: remembering Terry Pratchett, covering The Kitschies, and new books from Kazuo Ishiguro, Tom McCarthy, Antonia Honeywell, Paul McAuley, and not Adam Roberts

From the Other Side, March 2015
By Paul Kincaid

So the embuggeration won. We always knew it would, but even so … The first thing Terry Pratchett ever said to me was “Sorry.” I’d been organising the programme for a science fiction convention, and a publisher I’d never heard of contacted me to ask if we could invite one of his brand new authors as a guest. We didn’t know the author and our budget for guests was already allocated; so I said no. Terry Pratchett turned up anyway, and sought me out to apologise. If he’d known what his publisher was trying to do, he’d have stopped him. If we’d known what Terry Pratchett was going to become, we’d have said yes. The last time I talked to him was probably at the 1999 Worldcon in Melbourne. Late one night my wife and I were crossing the lobby when Terry hailed us. He was conventioned out, needed a break, could we sit and talk? Of course, we found a nice quiet corner of the lobby and sat and talked for maybe half an hour about nothing in particular, shared anecdotes, memories, that sort of thing. Then a fan noticed him and began to hover and Terry became the professional once more. One of the things all the obituaries agree on: he was a very nice man. He never forgot how much he owed to his readers and fans, and he never failed to give them full measure. It was always a pleasure to spend time with him. He died, it is reported, with a cat curled up asleep beside him. That seems right.

And after that, the normal business of March seems somewhat lacking.

I had intended to begin this month with the gossip from the Kitschies Award ceremony. Unfortunately, I seem to have fallen off the invitation list; and so have an awful lot of other people. Most of us weren’t even aware that the ceremony was happening until the day itself, there was nothing on the Kitschies website, and I have seen practically no reports from the ceremony itself. So all I can do is report the winners. The Red Tentacle (for novel) went to Grasshopper Jungle by Andrew Smith (Electric Monkey). The Golden Tentacle (for debut) went to Viper Wine by Hermione Eyre (Cape). The Inky Tentacle (for cover art) went to the cover of Tigerman (Heinemann) by Glenn O’Neill. And the new Invisible Tentacle (for Natively Digital Fiction) went to Kentucky Route Zero, Act III by Cardboard Computer.

Of the month’s new books, the most controversial was, undoubtedly, The Buried Giant by Kazuo Ishiguro (Faber), mostly because of a rather artificial spat with Ursula Le Guin. The two authors seem to have rowed back from their original positions, but even so, people, do we really have to retreat to that old ghetto mentality that should have been dead and buried decades ago? “They” (the establishment, the literati, whoever) are supposed to look down their noses at fantasy for being fantasy; “we” (the cognoscenti, the keepers of the flame, whoever) are supposed to despise them for venturing into our sacred grove. I’ve already seen people bristling with anticipatory indignation just in case one of “them” should dare to be rude about Terry Pratchett because he wrote fantasy. Well nobody is being rude, they are just celebrating the life of a universally popular, generally beloved author. And Ishiguro isn’t being rude or invasive by writing a fable. Practically all of his books have employed genre, and have done so knowingly and intelligently but to a very specific purpose. Of all the so-called “mainstream” writers who have been shortlisted for the Arthur C. Clarke Award, he was the only one who turned up for the ceremony; there was no looking down his nose at genre there. And in the new novel he has a dragon dispense a mist of forgetting across an Arthurian Britain, which allows him to approach a favourite theme in which we must remember the past if we are ever going to move beyond it. It’s a powerful theme and it perfectly suits the fantasy colourings with which it is told. March seems to have been a good month for mainstream novels of genre interest. There’s Satin Island by Tom McCarthy (Cape), whose last novel, C, should have been far better known among science fiction readers. In the new novel the central character, U, is obsessed by the quest to find a secret logic, a codex that, once cracked, will unlock the master-meaning of our age. Then there’s The Ship, a first novel by Antonia Honeywell (Weidenfeld & Nicolson), set at the end of time, in which our heroine’s father builds a ship big enough to keep 500 carefully chosen people alive, but then turns into a messiah figure while the people he rescued become infantilised. 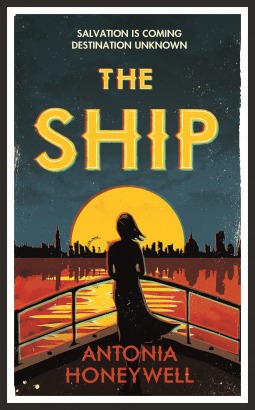 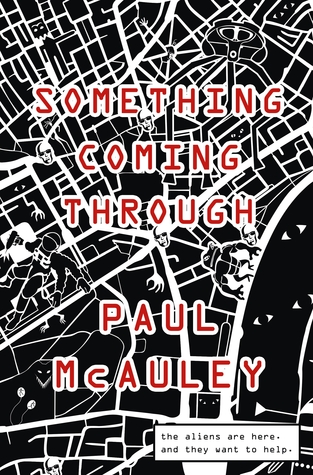 Paul McAuley’s new novel, Something Coming Through (Gollancz), is a novel about the apparently helpful aliens, the Jackaroo, who have appeared in short stories before now. Here, amid the miracles that could reverse the damage of war and climate change, there are more threatening mysteries to be found in the ruins of previous cultures on the worlds the Jackaroo have opened up to Earth. Haterz by James Goss (Solaris) is a blackly comic crime novel about a one-man crusade to rid the internet of haters, flamers, trolls and vaguebookers. While if your taste is more for horror, there’s a debut novel from Simon Kurt Unsworth, The Devil’s Detective (Doubleday), in which our hero has to track down a murderer in Hell, only to find that a revolution is brewing.

Finally, because he was miffed by his inexplicable omission last month: Adam Roberts has not had a new book published this month.

This entry was posted in From the Other Side and tagged adam roberts, kazuo ishiguro, paul kincaid, terry pratchett, the buried giant, the kitschies, tom mccarthy. Bookmark the permalink.

One Response to Paul Kincaid’s From the Other Side, March 2015: remembering Terry Pratchett, covering The Kitschies, and new books from Kazuo Ishiguro, Tom McCarthy, Antonia Honeywell, Paul McAuley, and not Adam Roberts