The Exploding Spaceship Reviews The Drowning Eyes by Emily Foster

The Tor novella program is starting out 2016 with a wonderful new story of a teenager who hasn’t quite gone through the trials to be an adult, and who is traveling across the world to save her country from a disastrous invasion.

Shina manages to get passage on a ship mainly because the owner is in desperate need of cash. The other members of the crew are not thrilled to have her aboard at first, but when they discover her secret they come to like her and want to help her. They all have to battle epic storms and escape from attacking ships, but eventually Shina gets where she needs to go in order to save her country from the invaders. 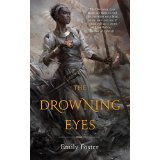 The ship’s crew is a group of wonderfully detailed pirate/smugglers, all of whom have different specialties. Their attitudes toward each other, toward life in general, and toward Shina change over the course of the story, and the character relationships are very much like those of real people, complex and unpredictable and full of surprises.

The setting feels very much alive, particularly with respect to Shina’s culture and how it is not accepted by the others because they don’t understand it. The places they visit are all unique and interesting, and the ship even has its own culture to some extent, which Shina doesn’t understand at first. Magic in the setting is very rare and carries a high cost, so this means that its use is rare and quite dramatic, although the magician doesn’t always remember what the magical event looked like because many times they end up unconscious!

This is a great fantasy adventure story with an atypical quest!