The Exploding Spaceship Reviews The Devil You Know by K.J. Parker

One of the devil’s minions has to deal with a request from the writer and philosopher Saloninus to sell his soul. Saloninus never made much money as a writer, but he invented a new type of blue paint which made him a fortune.

The writer’s request seems to be an ordinary one and the devil’s minion and the writer get along quite well with the minion being very helpful in locating nice clothes and food. This is a good thing since the minion will be sticking around to keep an eye on his investment. Soon the requests don’t have a purpose that the minion can ascertain. He is forced to ask about several things. It becomes clear that Saloninus has thought this deal out quite a few steps ahead.

The minion is enjoying himself, though, and so doesn’t mind the situation at first. He has great respect for the customer as a philosopher and some of the his works were the basis for several of the minion’s basic tenets of living. He keeps doing what he is asked and doesn’t wonder too much about what Saloninus is doing. 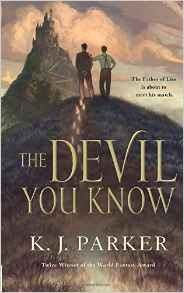 Then one day he discovers Saloninus is practicing alchemy which totally sets him off because an alchemist had made a couple of other minions disappear and no one knows where they went. He goes and asks his boss about it. He’s told that alchemy is so tricky that usually the alchemists blow themselves up so it is not an issue. Saloninus seems to be very good at it and doesn’t blow himself up. This scares the minion and he starts to look closer at what is going on.

Your Humble Reviewers don’t want to give away the plot, but we will say that both parties in this contract get out of it with something that benefits them. The snarly plots of Saloninus we will leave you to enjoy on your own! The devil’s minion also does quite a bit of plotting at the end once he discovers the truth.

This is a very strange buddy story, where the two buddies like each other and enjoy each other’s company, but their respective employments make for oddities in the relationship. We’ve never seen a selling-your-soul story with such a likeable devil’s minion before. The primitive tech level of the setting makes the characters really stand out from the plot and setting.

This is an interesting fantasy story with elements of religion, ancient history, and some philosophy included in it. Conversations were very well done and several exchanges made us chuckle. Not a funny story really, but has characters with a sense of humor. Overall, an entertaining read worth the time of any fantasy reader.

One Response to The Exploding Spaceship Reviews The Devil You Know by K.J. Parker