This is the first book in the DC Superhero Girls series, which is a new series for middle grades. The entire concept of superhero books with female characters is awesome! This series is being backed with dolls, action figures, and cosplay items at Target, plus an animated special.

For Your Humble Reviewer who has been wanting Wonder Woman books, dolls, and action figures since watching Lynda Carter on television in the 1970s, it meant a happy discovery on book release day which resulted in a quick order from the local B&N. The book was read in one evening, and a run to the local Target led to leaving store with bags full of Wonder Woman wonderfulness. 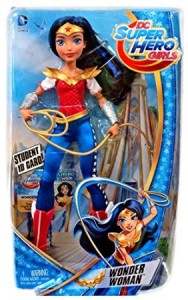 Teenage Wonder Woman wants to leave her home on Paradise Island and go to high school, like all the other teenage superheroes she sees on social media. She already flies around the world saving people, but because she grew to her teen years so isolated, she doesn’t understand other cultures and social norms. When she starts high school at Super Hero High, her lack of familiarity with social norms and teen culture mean that she really is the “new” girl.

The setting concept where everyone is a “hero” until they prove themselves to be a “villain” is a great idea. Harley Quinn is Wonder Woman’s roomie and is always waving a video camera or phone around. She is definitely intrusive and a bit hurtful towards others so you can see how she could get pushed down the villain path later.

The story is about how Wonder Woman learns how to be a friend, a team player, and how to, when necessary, put the feelings of others before her own. These are lessons that middle grade readers need to learn too, but it isn’t a preachy book. The events unfold in a natural way and you experience her feelings and doubts in the story, so it is clear that there is an internal struggle to make choices. 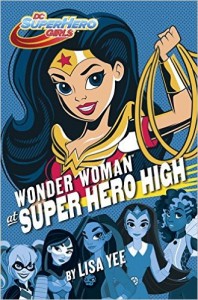 Amanda Waller as high school principal and Queen Hippolyta as Wonder Woman’s mom make up the main adult cast with a few other DC heroes as teachers. Some wonderful teenage friendships start developing with some local kids who are not enrolled at Super Hero High when Lois Lane covers Wonder Woman for her website and asks to meet at a local teen hangout spot. Steve Trevor is the waiter/counter help there and it soon becomes obvious he and Wonder Woman hit it off. Hope we get to see Wonder Woman’s first date in a later book!

Every Wonder Woman fan of any age needs to read this book, plus share it with all the younger women in your life! This is one of the few middle grade books with a female main character which didn’t make Your Humble Reviewers drop it and run away. Many have no plot or adventure and are full of Disney-style princesses, not fighting realistic teenage princesses.

Amazingly, one of the big comic companies managed to do it right by the female characters this time! So, a big hurrah for DC Comics and Random House!