This is the fourth volume of the Ascendant Kingdom Saga. Blaine McFadden has to deal with the aftermath of restoring the magic to the kingdom. Some of the fighting appears to be due to an unknown enemy pushing some factions to fight Blaine and his allies, so they try and uncover who is behind the problem. The vampires are gearing up for a civil war which would leave Donderath a land full of death and destruction so Blaine and his vampire allies are trying to find a solution which can prevent the war.

They find one, but it involves a trip to Velant for some of his allies and they must travel through some monster-infested waters. So, most of this volume has two story streams: Blaine and those who are in Donderath in one; in the other, those who are on the ship going to Velant, traveling overland there and then returning by ship to Donderath. The streams merge briefly then a party goes to solve the vampire civil war problem while the others are trying to hold down all the points being attacked by bad vampires and their allies. These plots are interwoven well and it is easy to follow the flow of the story.

Kestel (Lady McFadden) does many heroic things in this volume to keep her husband alive. She and others are pushing for Blaine to think beyond being the most powerful warlord in Donderath and to actually take the throne as King. Placing a King on the throne will give the country some magical protections which it currently lacks and desperately needs for combatting nefarious folks from across the seas. Blaine isn’t so sure that he wants the throne, but as everyone tells him, that’s a very good reason to place him on it! 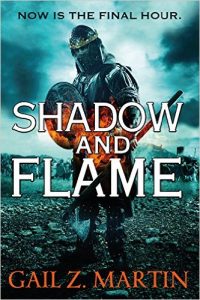 Ghosts continue to play an important role in the story, so Tormod Solveig the necromancer plays an important role in the story, as does Connor Bevin who can see, speak to, and be possessed by ghosts, including the vampire Wraith Lord. Connor hosting the Wraith Lord is again crucial for the success of parts of their mission and Connor gets the worse end of the deal again. He does however fall in love in this volume.

This volume has wonderful battle scenes at both the individual and group level, with some great ones featuring various people’s magical attacks or illusions. The good vampires also play a crucial role in several battles and the strategy for their use seems to be improving but unfortunately the bad vampires’ strategy is improving too.

Several characters including Blaine and Connor end the story in rather different personal circumstances than they started, so it will be interesting to see how these changes are reflected in future stories. Several of the supporting characters get more backstory time and this made several of them much more interesting and not just a bit part as they were in previous volumes. Some of these characters are fascinating, especially the long-lived vampire ones, so hopefully they get more story time and maybe even their own short stories.

So it is epic fantasy in a post-disaster fantasy world inhabited by interesting people who are mostly of common origin since the disaster killed most of the nobles. The fight to feed, clothe and house everyone while trying to fight battles makes for a more complete look at the world than just battles would. The characters are complex and have quite interesting senses of humor. Quite an easy read even if it is over 500 pages. This is definitely an epic fantasy series to pick up, particularly if you like things more complex than quest stories. 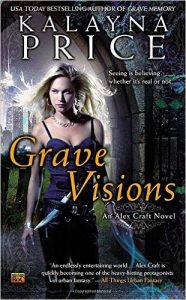 This is the fourth Alex Craft novel. Alex is a grave witch who can raise the shades from dead bodies. This means that she deals with a great many crime victims. Usually she goes to the morgue to raise them but some very strange deaths in locked rooms mean she has to visit some crime scenes in order to determine if the police or the Fae Investigation Bureau is in charge of the case. She discovers she really doesn’t like crime scenes.

Falin has been ordered by his queen to share Alex’s living space, so he is crashing at her place and this causes numerous problems. Alex’s boyfriend Death has been told by his bosses that he can’t see her anymore, but he doesn’t seem to take that as seriously as Alex does. Plus, with her being present at some crime scenes, she encounters him or his coworkers on several occasions. She ends up having to work several cases with Falin which further complicates her life.

To make her life even more interesting, Alex is ill and has little energy, although being in Faerie seems to help. The solution to her illness means she has to do a job for Falin’s queen, so dealing with court and the crazy queen make her life even more difficult. She also has to deal with her father when he sends someone to basically kidnap her since she wouldn’t return his calls. What he has to say doesn’t help matters in the least! However, he is able to explain why she is ill and even presents a solution if she is willing to take it. Alex of course never does anything the simplest way when it would mean giving up some of her freedom so she finds another solution but getting to it requires solving some complex drug ring problems and murders which involve Faerie and Nekros City residents.

This story reveals several sides to Nekros City that we have not glimpsed in previous books, and the details given make it seem even more real. Alex’s male person problems (Falin, Death, her father) make for a young adult life that no reader will envy but she does make progress towards sorting it out in this volume. You get a glimpse of Falin’s past and how he ended up working for the queen which gives you a window into his internal conflicts about Alex and the queen.

This is a very intriguing setting with complex characters and an interesting take on Faerie and magic. Alex is a messed up heroine but her struggles to find out who she is give the reader a deep look into the setting, its history, and politics which are very complex because you have mortals and fae involved.

This is one of our favorite urban fantasy series so we hope it continues.