Review of Runtime by S.B. Divya

Marmeg is a bouncer at a club and wants more than anything to race and place in the Minerva Sierra Challenge. The prize from placing would allow her to pay college tuition and buy her younger brother his postnatal license. No public education, health care or retirement without it. She wants better for him than she had. She earned her license herself by working for three years.

She has worked for a friend doing some coding for the black market in order to get chips implanted, and has scrounged some exoskeleton parts from the dumpster of a repair shop. Everything works but she packs some spare things to do repairs on the fly during the race.  No data connection other than GPS is allowed during the race so you have to research routes, terrain and weather ahead of time. 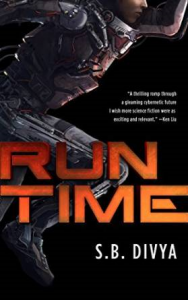 Marmeg also aspires to be a moot, a gender neutral person. She wears a torso shell to mitigate the appearance of her breasts and buttocks and has a neutral haircut. Many persons who have embedded chips and enhancement software are not gendered, but the moot surgery is expensive so Marmeg would need a real job as a coder in order to afford it. Enhanced humans being gender neutral makes complete sense because the individual chooses their appearance as part of the enhancement and many enhancements would make having children neither desirable nor safe. The way the code driving the chips and other hardware influences the speed and smoothness of movements is very realistic. Human body mechanics are very complex and there could never be just one way to code any of it.

Moots use the pronouns zie and zir, so there is extensive use of these in the story. Their use does not really cause any issues and does make it clearer who is a non-gendered person. Reader confusion only occurred at one spot and that was due to a question of who the pronoun referred to, which would have been an issue no matter which pronouns were repeated there.

The setting is dystopian, but not really that dark. Marmeg has hope and some luck so the ending is upbeat if not the complete happy ending of a more optimistic tale. There is not really much romance in the tale, and although Marmeg does notice other pleasing-looking persons, it is not clear whether she is interested in them in a sexual way. She is also very young, so it could just be the fear of unlicensed babies which dulls her interest. Further stories where she isn’t in a race for most of the story would need to address it.

Having a race which depends on athletic skills, survival skills, and map skills as well as on your physical enhancements and the software you run on them makes for an awesome setting. The physical challenges posed by the natural environment, the moral questions Marmeg must deal with regarding other racers and her battle to keep her enhancements running make the story an exciting one and a quick read.

Of the science fiction novellas which Tor.com has published to date, this is our second favorite with only the Nebula award winning Binti ahead of it. A must-read for every science fiction lover!

One Response to The Exploding Spaceship Reviews Runtime by S.B. Divya