When we last left James Griffin-Mars, he had rescued his sister Sasha and made it back to the Elfreth and his friend Elise. Now he has to find someone who can treat Sasha’s illness and convince them to come back to Earth with him. All his time-jumps without the medicine provided by ChronoCom have left him feeling very ill and cranky, so in order to deal with his life he self-medicates with alcohol.

This volume explores James’ fall into alcoholism, the repercussions this has on Sasha and Elise, the fighters who depend on him, and how he and all of his friends deal with his drying out. Of course the fight against Co-op is going on while he is dealing with his personal issues. He and Grace had been able to find someone to conduct time salvages for the Elfreth but these don’t always go as planned.

Elise ends up allying with several other tribes and eventually with most of the tribes in Manhattan in order to co-ordinate defense, farming, and treatment of the injured. The coalition ends up with some unexpected allies in the final battle against Valta which will have far reaching implications for Earth and ChronoCom in the future. 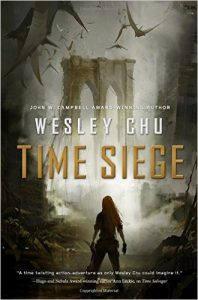 This volume has many great battle scenes and some great individual fights with both James and Elise (she has a robot that she rides in to fight). The supporting characters really shine with realistic portrayals of friends, squad mates, martial arts training mates, and families who come from many different tribes. James and Elise both make some surprising discoveries about themselves and each other during the course of the story. James and Elise are not young adults which Your Humble Reviewers (who are middle aged people) thought was great. Adventures are not the sole property of the under-thirty crowd!

It’s a science fiction adventure with a dash of romance, epic fighting, and some cool spaceships (although James and Grace’s new one is called Frankenstein so it’s not very pretty). There is time travel which has a bad effect on the traveler upon return and can sometimes cause time ripples and thus timeline changes. So readers who like adventure and don’t mind some time travel should really like this book. There are very meaty character descriptions and interactions in this volume, all while an overarching plot booms along. There is lots of corporate intrigue and government scandal in this volume, so for readers who like that it is a really great read, too.

It’s the further adventures of Quinn, the knight in a post-apocalyptic Eastern United States. The character is used to view most of the adventures in the story is Jaxon, a healer from Ohio who gets lured into a quest for information and technology forbidden by the Angels who rule the eastern side of the country.

By telling most of the story from another viewpoint character the knight remains a person of mystery, intrigue, and unknown power. His fighting skills are shown to be greater than several men combined, as demonstrated when he fights alone against groups. He has special weapons in his pistol and swords which others think are wondrous but are very hard to sell because they are instantly recognizable. This works to his advantage because if they get taken, he can easily narrow down the locations where the thief would go with them.

This is definitely not a version of America that Your Humble Reviewers would want to live in, but it is an interesting setting. Although the events which led to the current situation are rather depressing, the characters are not without hope. The mysterious Quinn still has many secrets which he has not revealed, so as he travels further perhaps we will get some flashbacks to the events that made him leave his city.

The adventures in this story are set primarily in ruins of cities, so there is lots of digging, climbing, jumping, and running from ghouls. It feels like a post-apocalyptic urban fantasy more in this volume, whereas the last story was more of a quest story. Quinn always finds someone who needs his help, and he does not always give it for free so we look forward to discovering who he finds in his next adventure. This series is definitely worth a read!

This entry was posted in The Exploding Spaceship and tagged guy haley, wesley chu. Bookmark the permalink.