Vol 7 No 7. Friday, November 10, 2017: Well, this one’s coming a bit later in the month than I’d like, but what else is new, eh? Hopefully not too many of you missed the Zine Machine Printed Matter Festival or the Fall Steampunk Picnic last weekend?

Anyway, last month seemed to really fly by, and there was a fantastic event towards the end of the month as Arcana Durham hosted Books & Brews with a big roster of Falstaff Books authors (John Hartness, Misty Massey, Natania Barron, Michael Williams, on and on!). Books were bought, cocktails were imbibed, stories were read, conversations had. (And apparently after I left, pub style Indian food was consumed?) All in all a lovely time. And to completely put a “bow” on October, HonorCon returned to the Hilton North Raleigh/Midtown. 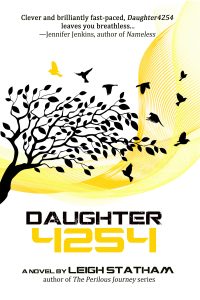 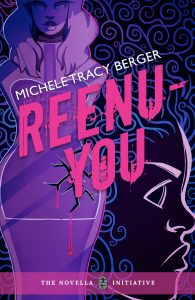 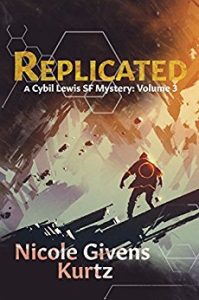 And now, November! And it’s packed with events, from the book launch for Leigh Statham’s Daughter4254 tonight at Flyleaf Books, to NC Comicon Bull City (already underway!), to Michele Tracy Berger and Nicole Givens Kurtz both reading at Ngozi in Durham tomorrow, and plenty more including! the world premiere of Octavia E. Butler’s The Parable of the Sower: The Opera at UNC’s Memorial Hall, readings from Scott Reintgen and Marissa Meyer, and even a science fiction card game launch (Pulsar Event at Atomic Empire, Saturday at 7 pm). 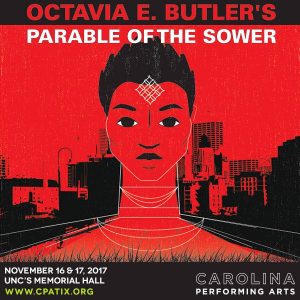 And… that’s really almost all I have put together for this go-round. Almost! As the temperatures start to dip, that can only mean one thing: it’s nearly Manly Wade Wellman Award season again! I know there’s a lot of work to do yet, but I do have a (very!) very preliminary list of eligible titles at least started. So! If you want to get a very early start, and stock up for winter reading (and holiday gift book ideas?) have a gander, and let me know about the books I’ve missed putting on there so far. There are probably a few literally sitting on my bedside table… 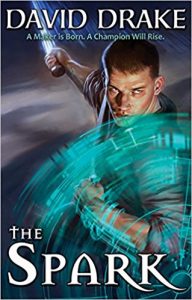 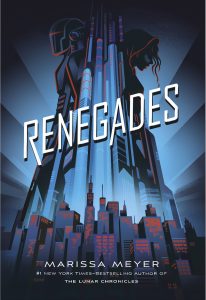 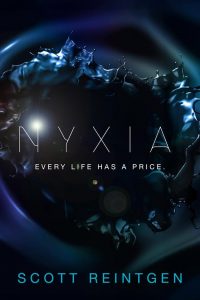 November 7 — Local author book release day for The Spark by David Drake (Baen). “In a violent world in which civilization has fallen and monsters roam, a young hero will rise.”

NEW: November 10 (Friday) 7 pm — Flyleaf Books hosts Leigh Statham discusses her YA novel Daughter 4254. “Daughter4254 used to think life in a community where art, music and names are outlawed would suffocate her creative spirit until she is left to rot in prison and realizes there is far worse. Then she meets Thomas, a fellow inmate, who tells stories of the mythical mountain colonies where people have names and the arts thrive, and she finds a shred of hope. Together they plot an escape, knowing they’ll die if they fail. Or worse, their consciousness will be taken by the MindWipe, leaving their bodies free for government use. When nothing goes as planned, Daughter4254 must choose between using her mother’s secrets of the rebellion to better the world she hates and following Thomas to the quiet life of freedom she has always craved.”

NEW: November 11 (Saturday) 7 pm — Durham’s Atomic Empire (3400 Westgate Dr) hosts Pulsar Event Release Party, launching a new head to head science fiction card-based board game. “We have received everything from our manufactures and it all looks amazing. In the next couple of weeks we will be assembling the games and getting them out the door. If you are a NC local (and even if you’re not) we are pleased to invite you to the Pulsar Event Launch Party November 11th 7-10pm at Atomic Empire in the Westgate shopping center 3400 Westgate Dr #14B, Durham, NC 27707. You can pick up your game(s) and check out all the cool stuff from Binks Games. We will even have a free to enter raffle for an Atomic Empire Gift Card.”

NEW: November 12 (Sunday) 5 pm — Durham’s Letters Bookshop (313 W Main St) hosts the Bull City Press Launch Party for Michael Parker’s New Book, Everything: Then and Since: Stories. “Join us for the North Carolina launch party celebrating the release of Michael Parker’s new book of short fictions, EVERYTHING, THEN AND SINCE. Michael will read and we’ll have refreshments.” (Fiction.)

NEW: November 14 (Tuesday) 7 pm — The Regulator presents an offsite event with Scott Reintgen at the NC School of Science and Math, 112 Broad St., Durham. “Scott Reintgen, author of the debut novel, Nyxia — a scifi thriller and first of a trilogy– will give a talk and reading at NC School of Science and Math. This event is free and open to the public. Books will be available for sale and signing at the event.” ‘Fans of the Hunger Games and the Maze Runner series will enjoy this series opener.’ —School Library Journal

NEW: November 15 (Wednesday) — UNC’s Gerrard Hall hosts An Evening with Toshi Reagon & Friends. “On the eve of the US premiere of Octavia E. Butler’s Parable of the Sower, join powerhouse activist and musician (and co-creator of the opera) Toshi Reagon and poet, scholar, and activist Alexis P. Gumbs to discuss the impact and importance of Parable of the Sower and Octavia Butler’s work at large, which has been cited as influencing artists from Kara Walker to Beyonce. Danielle Spurlock, UNC Assistant Professor in the Department of City and Regional Planning, will be moderating. Come engage in what is sure to be a lively and moving discussion about the book’s messages about race, gender, and the future, and how they have factored into Toshi and Alexis’s work as artists, activists, and community members.”

NEW-NEW: November 15 (Wednesday) 7:30 pm — The NC State Department of English presents Tania James & 2017 NC State Fiction Contest Awards Ceremony at the Talley Student Center’s Hatteras-Okracoke Suite. “The NC State Literary Readings Series presents a reading by TANIA JAMES, author of THE TUSK THAT DID THE DAMAGE and judge of the 2017 NC State Fiction Contest. Contest winners will be recognized at the event.”

NEW: November 16-17 (Thursday-Friday) — UNC’s Memorial Hall hosts the world premiere of an operatic adaptation of Octavia E. Butler’s Parable of the Sower. “This powerful opera brings together 200 years of Black music to give life to Octavia E. Butler’s acclaimed science fiction novel, with revealing insights on gender, race and the future of human civilization.” Get $10 tickets with code PARABLE (all seats general admission). To buy tickets and learn more visit the Carolina Performing Arts site.

NEW: December 1 (Friday) 7 pm to 12 am — Durham’s Augmentality Labs (207 N Church St) hosts a DOOM VFR Launch Party. “Total immersion in Doom VFR! Book out an HTC Vive with a group of 4 to experience 5 hours of Doom on LAUNCH DAY. $50/person includes food & drink, one headset per group from 7PM – midnight, the ability to watch each other play on the attached screen, and the chance to be one of the first to play Doom VFR. One person in each group also receives a personal copy of the game. Due to a bunch of legal jargon we won’t bore you with, we’re not sure if we can offer this game as a standard option – so this is your best chance to play!”

NEW: December 2 (Saturday) 2 pm — McIntyre’s Books hosts Scott Reintgen – Nyxia. “Every life has a price in this sci-fi thriller that has the nonstop action of The Maze Runner and the high-stakes space setting of Illuminae. This is the first in a new three-book series called the Nyxia Triad that will take a group of broken teens to the far reaches of the universe and force them to decide what they’re willing to risk for a lifetime of fortune.”

NEW-NEW: December 7 (Thursday) — Noir at the Bar Durham at 106 Main, with Eryk Pruitt and an assortment of ne’er-do-wells.

NEW: December 16 (Saturday) 11 am to 6 pm — The Durham Armory hosts the GeekCraftExpo RDU 2017 Holiday Market. “For our holiday market this year, GeekCraft Expo has partnered with Marbles Kids Museum to provide geeky, holiday-themed make-n-take crafting activities for kids & families…free of charge! For kids (and adults) who are into superheroes, gaming and/or geeky things in general, GeekCraft Expo is the perfect day out….because superheroes, gaming and/or geeky things in general is what GeekCraft Expo IS, wall to wall! Cosplay is highly encouraged (get one more use out of that Halloween costume!) and, as always, ADMISSION IS COMPLETELY FREE!”

January 12-14 (Friday to Sunday) — Illogicon at the Embassy Suites RDU with guests of honor Alyssa Wong and Stacey Lantagne, along with a fantastic lineup of guests.

March 6 — Local editor book release day for Star Destroyers edited by Tony Daniel and Christopher Ruocchio (Baen). “Boomers. Ships of the Line. Star Destroyers. The bigger the ship, the better the bang. From the dawn of history onward, commanding the most powerful ship around has been a dream of admirals, sultans, emperors, kings, generalissimos, and sea captains everywhere. For what the intimidation factor alone doesn’t achieve, a massive barrage from super-weapons probably will.”

April 3 — Local author book release day for Though Hell Should Bar the Way by David Drake, the latest in his RCN Series from Baen Books.

May 15 — Raleigh author book release day for A Rebel’s Stone by P.T. McHugh (Glass House) Book 2 in his “Stone Ends” series after Keeper of the Black Stones.

June 3 — Local author book release day for Empire of Silence by Christopher Ruocchio (DAW). “Hadrian Marlowe, a man revered as a hero and despised as a murderer, chronicles his tale in the galaxy-spanning debut of the Sun Eater series, merging the best of space opera and epic fantasy.”

NEW: July 13-15 (Friday to Sunday) — ConGregate 5 at the High Point Radisson, with guests of honor Jane Lindskold and Charles E. Gannon, and the presentation of the Manly Wade Wellman Award for North Carolina Science Fiction and Fantasy.