Well, first of all, given the presence of large numbers of people from both sides of several issues causing no small amount of strife in the SF/F fan community, the attendees were all very well behaved. There was only one incident by someone claiming to be press, but hadn’t bothered to notify the convention that they were attending. Your Humble Reviewers were among a number of press people who had notified the convention ahead of time and were badged as such; failure to conform to the event’s press rules is a good way to not be allowed back in the future.

This convention traditionally has many writers and publishers in attendance, and this year was no exception. The Baen road show was present along with a couple of their authors, Steve White and Michael Z Williamson. There were several book launches over the weekend. We attended one for Gail Z Martin’s War of Shadows which featured readings and munchies. Fantastic Books, a new publisher which we had not seen at a convention in the southeast before, was also in attendance and supporting the Writer Guest of Honor Allen Steele. Ian Randall Strock runs the publishing house, and he hosted a book launch for Allen Steele’s collection Tales of Time and Space and Bud Sparhawk’s planetary sailing adventure Distant Seas.

The convention has many writer panels, sometimes four or five running at once, and they run the gamut of topics from short fiction to novels to comics. Several writing workshop-type panels which must be signed up for ahead of time were also featured. This year they added an art track and that seemed to be well-attended.  They also featured some musical guests and panels of interest to filkers.

The dealer room had a wide variety of goods on offer, including several book and jewelry stalls, a weapons stall, and a couple of costuming stalls. The author’s book signing table was also in the dealer room near the book sellers so everyone benefits from their presence, rather than having them cloistered off alone in a room. Other conventions could learn from this arrangement. 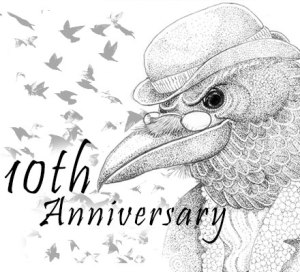 This convention has programming for all ages, including children. Aspiring authors and artists will find panels of great use to them. The parties allow for great networking. The convention is well run by experienced staffers. The anime crowd is evident at the convention but they are only a small portion of the convention, with most of the programming being influenced by the writers, artists and musicians.

One Response to The Exploding Spaceship Visits RavenCon 2015!