The Exploding Spaceship Reviews The Builders by Daniel Polansky

Review of The Builders by Daniel Polansky (Tor.com November 3, 2015)

As fans of Mouse Guard, Mice Templar and Redwall stories, Your Humble Reviewers were thrilled to find an animal adventure story among the novellas. The Captain is a mouse who wears a hero coat, boots and a hat. He is fierce looking for a mouse because of a scar running down his face across where his right eye should be. He calls all his old cronies to meet at a bar called the Partisan’s. The party consists of a French-sounding stoat named Bonsoir, an opossum named Boudica, Cinnabar the red salamander, Barley the badger, a very fat mole named Gertrude, and an owl called Elf who has an injured wing. They had all served in the war with the Captain and have skills which will contribute to a special operations group (or an adventuring party, depending on your perspective). They have all settled down to a civilian life in a country devastated by war but will meet the Captain and hear what he has to say because he’s their leader.

The Captain is planning one last attack in order to destroy their remaining enemy and to discover who in the group betrayed them the last time. They encounter an armadillo, and have an adventure on a train before heading to the bad guys’ impregnable fortress. It becomes clear that some in the group decided that they wanted to go out with a bang, so although some of the creatures die, they got to die in battle and on their feet. 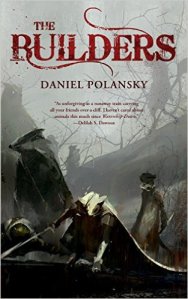 All the creatures are highly detailed characters who each have their own introductory section where the Captain goes to find them at their civilian location to convince them to come to the appointment at the bar; then each enters the bar in the next scene. How the other characters act toward them reveals quite a great deal about the group dynamics. Their quirks and personalities make their relationships complex, and of course they don’t all agree on anything other than that they will follow the Captain. Many had thought him dead or at least finished with battle but all those he approaches appear even though some needed to be tricked.

The technology level of the setting has a late 1800s feel, with guns, rifles, and trains. They have horrible old buildings and ratty taverns and the whole country was at war so it sort of feels like a war-torn Britain or Ireland. Of course, it would be a very alternate version because all the sentients are creatures, not humans.

The Captain sucks you right into the story and pulls you along to meet his gang. Then the action starts and things roll quickly. The main bad guys are just as well developed as the Captain’s crew but there are red shirts in there just intended to die. The plot is twisty and both sides create surprises for the other.

It is basically a wonderful Victorian war adventure in miniature, both in the length of the story and the size of the characters. The characters are captivating and we hope to see more of them. Everyone who likes an epic gun battle in their adventure stories should read this charming novella!