This is a science fiction adventure about a fight in a cargo hold between two scientists and the woman who has bounced her allegiance from one to the other. However, the cargo they fight over is a reality altering machine which causes different realities to become dominant. The changes in realities change the three main characters’ species, their sex, or their cultures depending on the alternate selected.

At least five different versions of each main character are used in the story. In the different versions of reality, the shots fired hit different characters and sometimes the machine. All are variations on a scientist, the scientist’s partner, the bad scientist who has apparently stolen the allegiance of the partner, and various thugs. The weapons change to be appropriate for the setting, but the machine is always present.

The characters seem to remember the earlier scenes from the other realities, but after several changes the different versions blur together. Dran (one of the scientists) realizes that he can communicate with the machine and ask it for help as long as he stays away from major changes, so he gets water washing into the cargo hold at one point, for instance. The plot is eventually resolved when the fight scene ends with a clear victor, but Your Humble Reviewers don’t want to give away the details of it. We’ll just comment that it was a combination of a classic plot ending, coupled with a reality alteration which even Dran wasn’t expecting. Literally, a deus ex machina, because the machine did it. 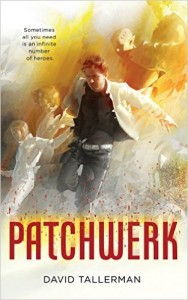 From a setting perspective this was a very challenging story because there are five very similar settings, but the author does a good job of making the details different enough for the reader to grasp the setting change right away. Also the character names usually start with the same letter or sound, so it is easy to identify everyone even with a name change. By making the machine a character who has a personality and a clear set of moral codes/programming rules, Tallerman does an excellent riff on a clichéd plot device by turning it on its head. It is a very cleverly written and plotted story; you will definitely have to pay attention to details as you read, or you will suddenly realize that you have moved to a new world with new characters and the author has caught you unawares!

One Response to The Exploding Spaceship Reviews Patchwerk by David Tallerman