After enjoying ourselves in the Pacific Northwest last year, we decided to venture out that way for another convention. Norwescon is primarily focused on SFF literature but also covers anime, costuming, art, gaming and other things of genre interest. It is also the host for the Philip K. Dick Awards each year. This award is for distinguished science fiction books published for the first time in the US as paperback originals. In 2016 the nominee list happened to include several authors whom Your Humble Reviewers have read and reviewed books from in previous months, so we were excited to see who would win and see what else the convention had to offer.

The facility at the Doubletree is quite spacious and there was plenty of room to walk around. The hall tables were placed so that different ones weren’t crowded together; when they got busy there was still room to walk. The dealer room was fantastic! It had a great mix of vendor types, including many with very nice craft items like jewelry and geeky clothing as well as many costuming pieces. It also had some nice book vendors.

The area around the hotel had some reasonably-priced local restaurants which were quite good, such as Pancake Chef and Ivar’s Seafood Bar. Pancake Chef has epic breakfasts in a very quaint building which has the original designs from the 1950s. Ivar’s is a local Seattle legend which has been serving quick but excellent seafood for years: think a local Captain D’s which is actually good! A word of warning though: the Seatac area and Seattle itself are very tight on parking so be prepared to pay a steep price and it might be advisable to use the hotel shuttle or a taxi for short trips away from the hotel.

The choice of panels was quite extensive, and not repeats of the same old things. There were many writer- and artist-oriented ones, so many we couldn’t attend them all; the number of writers attending was staggering! There were parties at night, but we found them to be inconveniently far from the convention space and each other. The hotel is huge so you have to walk a great deal; those with mobility issues might need some wheels. All the spaces are accessible but some require knowledge of where to go because the elevators are hidden. There were a few autograph sessions in a very big room, but even so there were so many authors that they wouldn’t all fit at once! We saw every type of fan imaginable and costumes and cosplay which were amazing. The convention runs a Tumblr page for everyone to post pics so to see the wonderfulness go here: http://norwescon.tumblr.com/ . 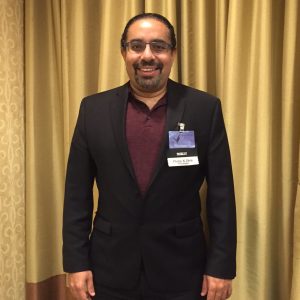 We were very pleased that a book we really liked won the Philip K Dick award: Apex by Ramez Naam. A special citation went to Archangel by Marguerite Reed. We had reviewed the second book in Naam’s series, Crux. The series explores what would happen if someone wrote software for the brain which was delivered by a drug and allowed people to link their minds together. The young adult main characters have quite an interesting ride through the trilogy, as they had no idea of some of the implications of their invention until it is already out in the world. They spend the series trying to fix problems and chasing people who hurt others using the software. But they also discover some wonderful things being done with it, so you see both sides of their invention.

Overall this is a very good convention for writers to meet fans and sell books, for writers wanting to learn about the craft or the business of writing, and also for general fans. It definitely felt more welcoming to everyone than some southeastern US conventions have been in the past, so it might be one to try if you want to try a more welcoming convention experience.

Next year the convention is April 13-16, 2017 in SeaTac, Washington and the theme is Over Hills and Far Away. The spotlight publisher will be Angry Robot Books. Artists Guest of Honor will be Cory and Catska Ench and the Science Guest of Honor will be Dr. Ethan Siegel. Visit http://www.norwescon.org to find see further announcements.

One Response to The Exploding Spaceship Visits Norwescon 39 in SeaTac, Washington!