The Exploding Spaceship Reviews Spear of Light, Infomocracy, and Like a Boss

We return to the adventures of Nona and Charlie on the planet Lym after the treaty with the Next has at least temporarily put a war with them on hold. Tempers are very volatile on all sides, and Nona works as an ambassador trying to forge links between the groups. Others have different ideas and use violence and terrorist attacks to try and get their way, or at least prevent others from having theirs. How the different factions of humans sort everything out certainly could give some present day humans ideas about what to do instead of blowing up their neighbors.

There is interesting planetary exploration of old hidden caverns in this volume, as well as some fights and ship battles. Most of the book takes place on Lym with only small amounts completely being on the Diamond Deep (although it is close enough that there are real-time calls between Nona and the space station). Nona and Charlie’s romance picks up some steam, although being on the same planet and not being together all the time makes the two of them very frustrated!

When we have the robots’ viewpoints we are starting to get an idea what the Next might want, but the robots aren’t mature enough yet to truly understand the Next. As with many conflicts, the ultimate problem is one of communication. The Next communicate at a whole different level of speed and complexity than humans or the recently-made Next robots. The history of the Next and how that is entangled with the history of Lym is something many of the humans don’t know, so as they unravel the puzzle this will hopefully allow them to understand the Next better.

The differences between the robots and the humans make you question what it means to be a human. And as the history of the Next is discussed, you see what happens when one group decides the other is no longer human. We see some Next characters in this volume and their portrayal makes the difference between them and the robots very clear.

This is space adventure which makes you think, with characters that are human or used to be human, even if it was many, many years before. There are no aliens except those who have changed themselves and as a consequence seem alien to the humans who can’t communicate like machines. 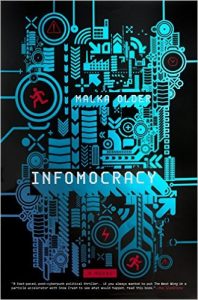 This book is about a planet-wide election in a future when corporations as well as political parties can form governments. People vote for their government in groups of 100,000, so cities, towns, and rural areas as we know them now are split into these groups of voters. The campaigning is even more extreme than now, but there is a moratorium on campaigning the last twenty-four hours before Election Day. The timing of the book release right as we head into a summer of nominating conventions for a presidential election means the many opinions about different forms of government from the characters in the book will be appreciated by readers.

The technology presented for voting, transportation, and communication is all reasonable near-future tech, even if some of the things like advertisements would be very annoying. The author’s travels around the world are put to good use here because her characters move around a globe where the neighborhoods they visit seem alive and real. The cast of characters come from all over the globe and have every color of skin but translation devices make communication with people who speak a different language much easier. Your Humble Reviewers have certainly wished for such devices when dealing with clients with whom we do not share a common language.

Ken is the character who we follow for most of the book, and he intersects at some point with the other viewpoint characters. He is based in Japan and works for a political party that is trying to improve the number of local governments it has. His experiences with trying to convince voters about his employers offer an interesting view of this future. He has his doubts about the system and his employers, but as the election process and Election Day get derailed by other groups he tries his hardest to help get things back online by helping out the group that runs the election process. Getting an inside view changes how he sees himself, his place, and his party’s position. He finds a little romance along the way and although he is a bit disconcerted by her true occupation, she ultimately leads him to experiences which change his entire perspective of the world, the election process, and what needs to be done to protect it.

This is a book full of colorful, complex characters going on travel adventures around the globe while dealing with a planet-wide election. They have many types of adventures: romantic ones, dangerous ones with fights and crashing vehicles, as well as some getting captured by enemies and acquaintances. The best description for the book would be “science fiction political thriller”, so if you like science fiction adventure or political thrillers then this book is for you!

For a debut novel, this is a phenomenal work with the best world building we have seen in a first novel in years. It has many sane points to make about politics, campaigning and elections, which in this insane election year were much appreciated! 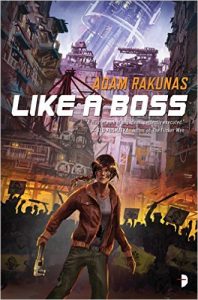 Padma returns with new adventures and since she now owns the Old Windswept Distillery, this volume centers on the rum distillers co-op, the Freeborn who provide the cane and work to process it, and the Union members in the city who do most other infrastructure jobs. None of the three groups are getting what they need in terms of money, benefits, workers showing up for work, or cane deliveries, so the entire economy is collapsing.

Padma does her very best to prevent this from happening and she has many people from the different groups who help her once everyone figures out who is causing the problems. Padma and her friends endure fights, kidnappings, riots, being burned out, and having a building fall on their heads. The dark and gritty society they live in does its best to end not only Padma, but everyone else, too. The root of the problem is of course the corporation which thinks they can control the planet and possibly leave it with no connection to space once the economy collapses and they have no further use for it.

In addition to the society level issues, Padma must face her own internal demons which surface every day at 6:00 p.m. Because of all the violence occurring in the city Padma must get help from others to continue her nightly ritual, and eventually she realizes that sharing a burden can lighten it. She had no concept of how many people like and appreciate her until she has to rally everyone together to save the society and the planet. The streets fill with people and they all follow her instructions and go back to work.

We see Padma discover the power of a good speech, even when its contents are shared via word of mouth. Also it is a story of hopeful people triumphing over those who have given up. It has a wonderfully diverse and nuanced cast of characters and a vibrant setting that feels alive. Even the supporting characters show a great deal of emotion, and the crowd scenes make you feel like you can read the crowd’s mood just like you were there.

If you like science fiction adventure with strong characterization and many feels, then buy this book!

This entry was posted in The Exploding Spaceship and tagged adam rakunas, brenda cooper, malka older. Bookmark the permalink.