So … what if humans were sharing the planet with vampires and those creatures kept their presence a secret until now? How would the FBI deal with the situation if some of those newly-discovered vampires were kidnapping and killing teenagers outside of Chicago?

These are the questions that Olson’s novella answers, and it answers them in a very engaging and entertaining manner. Young Alex McKenna is the lead character. He has an interesting family history with the FBI, and his best friend for many years always acts as his second in command. Both of them are very young to be in charge of a unit, much less an entire city’s agents. The division dealing with vampires has lost many agents, so McKenna must select more people for his team. The process of selection gives insight into Alex and his second, Chase, as well as the people being selected. 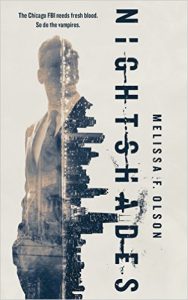 Alex uses some unusual tactics to get the information he needs to make his team complete and get the necessary intel to find the vampires. How they solve the crime and the details of the final confrontation are things that Your Humble Reviewers do not want to give away, but we will say that the plot was not a straightforward one easily guessed and there were several surprises stemming from the characters’ actions.

It’s a police procedural urban fantasy set in the modern day, so procedures, weapons, buildings, and most details of the setting are realistic, but as vampires are present, it must be an alternate world. Since Your Humble Reviewers also write police procedurals (although set in the future), we were quite pleased to find one in our Tor.com reading material. We don’t think we would like to live in a world with vampires running wild, but it is an excellent contemporary place to visit!

This entry was posted in The Exploding Spaceship and tagged melissa f olsen, tor.com. Bookmark the permalink.

One Response to The Exploding Spaceship Reviews Nightshades by Melissa F. Olson