Duke University’s David M. Rubenstein Rare Book & Manuscript Library has recently re-opened after extensive renovations, and among their fall exhibits this year is Dreamers and Dissenters: Selections from the David M. Rubenstein Rare Book & Manuscript Library, presented in the Biddle Rare Book Room: “To celebrate the reopening of the newly renovated David M. Rubenstein Rare Book & Manuscript Library, [Duke has] brought together books, manuscripts, photographs, recordings and artifacts that document human aspirations. They include legal documents, religious writings, literature, propaganda, advertising, and the visual arts. Some, like Thoreau’s Walden, seek to guide individual conduct. Others, like the Haitian Declaration of Independence, layout out a roadmap for a nation.  Still others, like the Ford’s ad campaign in 1943 provide a mirror for collective yearnings. Together these materials demonstrate the breadth of vision of our collective humanity and its endless capacity to change.”

While other exhibits are also intriguing (American Beginnings, featuring the Bay Psalm Book, Languages of Anatomy: From Vesalius to the Digital Age, The Birds of America: Original drawings by John James Audubon, 1827-38, and Sidney D. Gamble in China, 1908-1932: Photographs from the David M. Rubenstein Rare Book & Manuscript Library, all pictured here save the Gamble exhibit) the “Dreamers and Dissenters” exhibit is of direct interest to speculative fiction readers as a portion of the display includes selections from Duke’s Glenn R. Negley Collection of Utopian Literature which are, simply, awesome to behold.

Sara Seten Berghausen, Associate Curator of Collections for the David M. Rubenstein Rare Book & Manuscript Library, gave author Delilah S. Dawson and I a guided tour of the exhibit. We entered through the Perkins Library, which was displaying additional items of interest including some first edition Dungeons & Dragons materials. 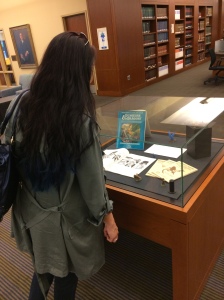 In the new connection between Perkins and Rubenstein, a collection of medical texts contained several oddities including Gregor Reisch’s Margarita philosophica from 1583:

Moving into the new Rubenstein proper, we were greeted first by some open pages (turned periodically by library staff so that each page is not overly damaged by exposure to light) from the pen and inks of naturalist John James Audubon:

And one of the newer additions to the library’s collections, Virginia Woolf’s writing desk, which had been a standing desk until an inheritor both cut the legs and had it painted. Here, the library presents it on a small pedestal to re-create its original height:

Beyond the desk, the “Dreamers and Dissenters” come into play. Copies 1 and 2 of Walt Whitman’s Leaves of Grass, Ralph Waldo Emerson’s The Conduct of Life (inscribed “to his friend Nathaniel Hawthorne”), and a first edition of Henry David Thoreau’s Walden all captured quite inexpertly by my iPhone camera. (Why didn’t I bring a better one!) 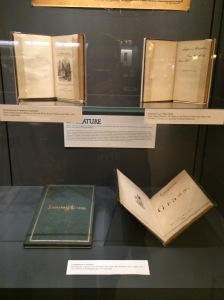 Next? Oh, just an 1823 edition of “The First Work of Science Fiction”, Mary Wollstonecraft Shelley’s Frankenstein along with Henry M. Milner’s The Man and the Monster!, or, The Fate of Frankenstein, below Karel Capek’s R.U.R. (in which the word “robot” is coined) and Thea von Harbou’s Metropolis, described here as the “Basis for the First Science Fiction Film”. 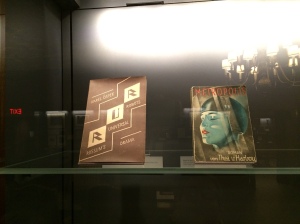 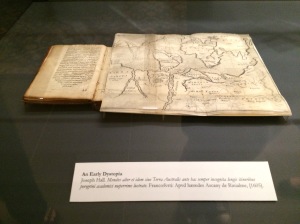 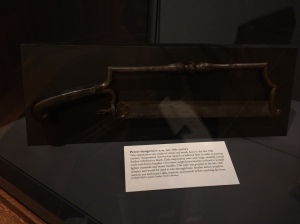 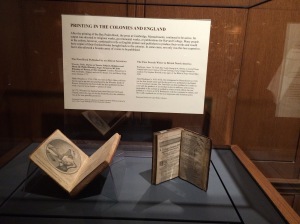 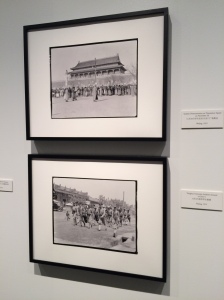 I’ll leave you with another view of the eyes, as well as again my thanks to Sara Seten Berghausen for the fantastic tour of the new space and exhibits. It was absolutely exhilarating to see Whitman, Thoreau, and Emerson displayed like this, next to Woolf’s writing desk, next to Shelley and Capek and Sir Thomas More. I encourage you to take your own walk along this exhibit of “dreamers and dissenters”.