As I wrote when introdudcing his collaborator’s Hardest Part essay: “I’m a big fan of both Lex Wilson and Jason Strutz, so I was quite excited to see their new 7-day-only “Quickstarter” Kickstarter campaign for their new one-shot comic, KLAY. Strutz was (along with Jeremy Whitley) one of my first Bull Spec interviews, for their Order of Dagonet comics, and he went on to do two print issue covers and other interior illustration for me, and I’ve also enjoyed his fantastic work on David Foland’s Pizzula, before, and this is completely unfair, he moved several states away. Still, he’s been no stranger, and he’ll be back in a couple of weeks for NC Comicon. Here, they’ve put together a multi-style story of “A superhero sidekick with elastic/morphing powers crosses multiple realities to solve his own murder” where Strutz has had to display both a typical 4-color “superhero” style as well as a darker-toned “noir” as well as peeks into other realities.”

Strutz is part of an absolutely fantastic lineup for this year’s NC Comicon this weekend (November 15-16) at the Durham Convention Center  — which includes John and Carole Barrowman, Fiona Staples, Tommy Lee Edwards, Bernard Chang, and many more — and here we talked about being so far from “home”, what he’s looking forward to this year, and of course his work on KLAY. 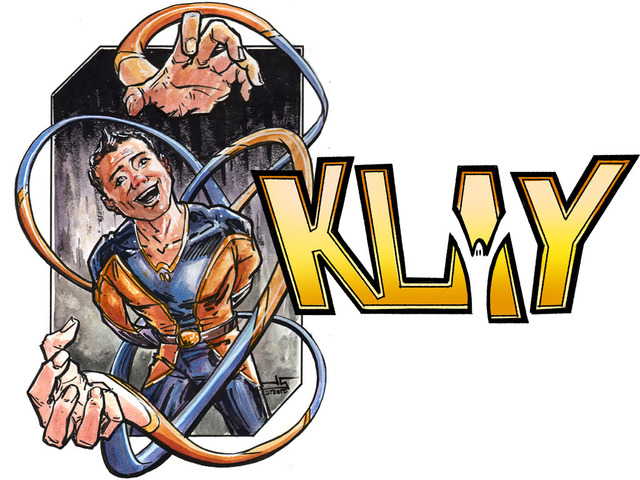 Q: Jason! Mon frère. You had built up not just friendships but close working relationships as well here in the Triangle before you exiled yourself to the frozen north. Have you felt like you were living in two creative worlds for the past couple of years?

Nah, It’s all one creative world, mine! The only effect it has is most of  the people I’m working with are in the Triangle, so it would be nice to talk in person more.

Q: You’ve were back for NC Comicon last year as well. What makes this such a special convention for you?

I work for Ultimate Comics and do the graphic design for the show, plus I know a lot of the attendees and guests from my time at the counter at Ultimate. So it’s always a homecoming for me.

Q: Had you worked with Alex before getting started on the KLAY project?

I did a cover for his short story, The Last Christmas of Mrs. Claus. He’ll have that at NCC this year, along with Klay.

Q: Alex talked about the dual stylistic approaches to KLAY, the superhero and noir color palettes. Can you talk about developing those two distinct styles and how you worked them against/with each other?

Alex wanted Klay to come from a simpler world of big superheroes and goofy villains, so I went with a silver age style for that. I used some digital equivalents of brushes and pens and rendering techniques that were used in silver age books. I also used the color palettes from the time as well. For the noir universe I used a darker style, and more modern coloring techniques, which is also closer to how I am working now.

Q: This is shaping up to be the biggest NC Comicon ever. Is there a “danger” (for lack of a better word) of things getting too big, too media focused, and if so how do you think a Comicon can work to keep a good balance?

I think there is a balance to be struck between giant media shows and comic focused shows, and so far I think we have been very successful in keeping that balance. There is always a place for  media guests at NCC, but the staff has always focused on the comic side of things. I think this is due to it being put on by the Ultimate Comics store staff, rather than a media group, so comics are their forte.

Q: Other than seeing old friends and meeting your industry colleagues, anything else in particular you’re looking forward to while you’re in town?

I would like to try and get into The Pit for some barbeque and get some good Mexican food.

Q: See you next NC Comicon?

MORE WORK FROM THIS ARTIST:

This entry was posted in Coming to Town and tagged jason strutz, nc comicon. Bookmark the permalink.

One Response to Coming to Town: Jason Strutz for NC Comicon