Paul Kincaid’s From the Other Side, May 2015: The Clarke Awards and new releases from Kirsty Logan, Peter Higgins, and Paolo Bacigalupi

From the Other Side, May 2015
By Paul Kincaid

One of these days I will discover why literary events in Britain are so drawn to venues like this: large but low-ceilinged, so that it is hot and loud. I came out of this year’s Arthur C. Clarke Award, held on the top floor of the new Foyles bookshop in London, with a sore throat because every conversation had to be shouted. At least there was plenty of wine for lubrication and to assuage the heat. And there were a lot of people to talk to, though I only spotted one of the shortlisted authors, Dave Hutchinson. (A few weeks later I met another shortlistee, Emmi Itäranta, at a reading she gave at the University of Kent, Canterbury; her forthcoming novel sounds very interesting.)

The ceremonies this year were kept to the minimum: the usual speeches and long list of thank yous, and then two-time Clarke Award winner Pat Cadigan was called on to open the envelope. She delayed proceedings just a moment while she took a selfie, and then announced that the winner is Station Eleven by Emily St John Mandel. A bit of a surprise maybe (talking to different people I got a sense that the smart money was on Hutchinson or Claire North), but a popular winner nevertheless. A representative from Mandel’s UK publisher read out a short speech which noted that the first Clarke Award winner was Mandel’s fellow Canadian, Margaret Atwood. 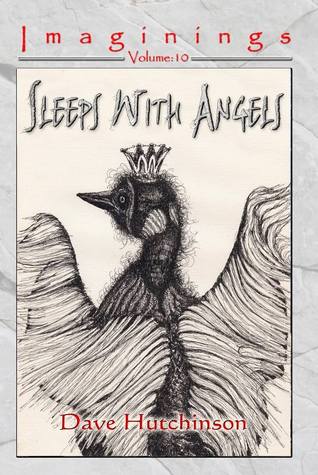 Next year will be the thirtieth Clarke Award, and administrator Tom Hunter is promising a year of special events to mark the occasion. If I have the stamina, I’ll report back on as much of it as possible.

It was a disappointing evening for Dave Hutchinson, but at least he has the consolation of knowing that his new collection of short stories, Sleeps With Angels, is now out from Newcon Press. For a prolific short story writer, who had four collections published before he was 21, this is his first collection in a decade. Among the six stories in the collection is “The Incredible Exploding Man” which was included in Gardner Dozois’s Year’s Best Science Fiction for 2012, and a brand-new story, “Sic Transit Gloria Mundi”.

If Emily St John Mandel won this year’s Clarke Award, what chance next year for a book that’s already being compared to Station Eleven? That’s The Gracekeepers by Kirsty Logan (Harvill Secker), set far enough in the future for most of the Earth to have been drowned. The central character performs with a tame bear in a floating circus, but she breaks the norms of her society when she falls in love with someone from one of the few remaining islands. To be honest the novel doesn’t seem to be as good as Mandel’s, but it is an interesting debut nonetheless. 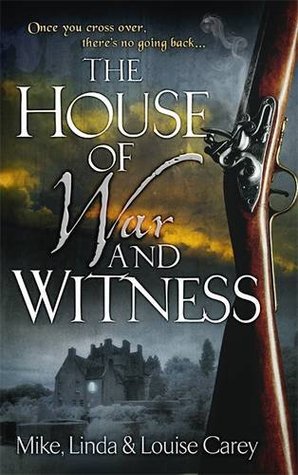 I should have noted it before, but M.R. Carey, who made the Clarke shortlist this year with The Girl With All the Gifts, also has a book out, this time it’s a family affair written in collaboration with Linda Carey and Louise Carey. The House of War and Witness (Gollancz) is set in 1740 with a company of Austrian soldiers sent to a border town to defend it against Prussian invasion, only to find a place full of secrets where the dead know more than the living.

It does seem to have been a month for on-going series. Peter Higgins, for example, has completed the Wolfhound Century trilogy with Radiant State (Gollancz), in which we discover the glory and the horror of Joseph Kantor’s plan for the Vast. M.D. Lachlan, meanwhile, has added another volume to his Norse Epic with Valkyrie’s Song (Gollancz) which moves the story on to Norman England. And Andrzej Sapkowski has produced a collection of stories, Sword of Destiny (Gollancz), set in the world of Geralt the Witcher. While David Dalglish has completed his Shadowdance sequence with the fifth and final volume, A Dance of Cloaks (Orbit). Also from Gollancz comes The Tabit Genesis by Tony Gonzales, a bit of old fashioned sf adventure with a great ship sent from Earth to ensure the survival of the species only to discover, when it arrives at a lifeless planet, that Earth itself has been taken over by aliens. Though I suppose the biggest book news of the month has to be the long-awaited appearance of The Water Knife by Paolo Bacigalupi (Orbit), which seems to have been on its way forever. I only hope, after all that time, that it lives up to expectations.

One Response to Paul Kincaid’s From the Other Side, May 2015: The Clarke Awards and new releases from Kirsty Logan, Peter Higgins, and Paolo Bacigalupi