The Hardest Part: Henry Vogel on The Fugitive Heir

The planetary romances of Edgar Rice Burroughs and Leigh Brackett fueled Raleigh author Henry Vogel’s imagination and directly inspired his Scout series of novels, published by Bruce Bethke at Rampant Loon Press. For his new novel, The Fugitive Heir, Vogel has (with Bethke’s blessing and support) submitted his “space opera meets adventure thriller” to the Kindle Scout program. To give his submission the best chance for success, Vogel had artist Aaron Starr, who has also provided the covers for the “Scout” series, create a fantastic cover to go along with Vogel’s (obviously still planetary romance influenced) pitch: “My parents are not dead! I know it but can’t tell anyone why I know. Of course, no one believes me. They say I should take my vast inheritance and let it go. They’re wrong. So I’ll use my inheritance to fund the search for my parents. I didn’t count on opposition from the board of the company I’m inheriting, but powerful people will do anything to protect their dark secrets. They didn’t count on my two wildcards—a rebuilt spaceship and a blonde classmate I’ve loved since the sixth grade.”

When I wrote Bethke to ask about his thoughts on Vogel’s decision to go with the Kindle Scout program, he replied: “Of course I support what Henry is doing, just as I supported Beth Cato when she was shopping The Clockwork Dagger to Harper Voyager, Guy Stewart when he was shopping Heirs of the Shattered Spheres to MuseItUp, or Robert Lowell Russell as he’s shopping something I’d really love to have first dibs on to Tor right now. It’s worth noting that when we incorporated in 2008, we’d originally planned to name the company Launchpad Press, but didn’t because that name was already taken. That name did grok our concept, though. We were hoping to become the platform from which at least a few new writers — and editors! — launched their careers.”

Well, we also have a chance to help Vogel’s career get a little launch boost, by nominating his Kindle Scout campaign. Here, Vogel writes about the pard part of “pantsing” his way through The Fugitive Heir. Enjoy!

The hardest part of writing The Fugitive Heir was my complete inability to plan much beyond the next scene of the novel. You see, I am a ‘discovery’ writer—also known as a ‘seat-of-the-pants writer’ or a ‘pantser.’ In direct contradiction to the majority of the writing advice you’ll find, I don’t out create a detailed outline. I don’t even create a minimal outline.

I start off with a very basic plot, an opening scene, and a vaguely defined final destination. Sometimes my novel reaches that destination, sometimes it comes somewhere else entirely. Everything else is unknown.

This leads to some delightful discoveries during the writing process. The character of Jonas, my hero’s head of security, wasn’t in my plan. I needed a bodyguard to speak with Matt at the end of the opening scene. Only, when the bodyguard started talking, I realized he wasn’t just a toss-away character. He played an important role in Matt’s life and, as such, had to play an important role in the novel. That one realization cascaded through the plot, forcing changes to my two main characters which reverberated all the way until the end of the book.

It was this sense of discovery which made writing the book both hard and exciting. It was hard because, when I sat down to write, I never knew what advance planning I’d have to scrap before the writing session was over. I ended up dumping a lot of scenes I really liked because they no longer fit in the novel I was writing. Despite my inability to plan much beyond the next scene, it’s also an exciting way to write. After all, if I don’t know where the story will go next, my readers aren’t likely to find the story predicable, either!

Honestly, as difficult as it can be writing into the dark, I can’t imagine restricting myself to a written outline. Forcing my story to stay on a predesigned path? Now that really would be hard! 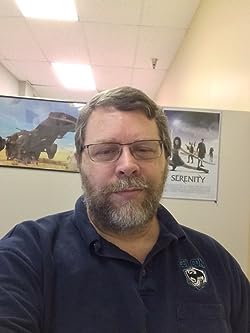 I got my start in indie comic books during the 1980s, where I created and wrote The Southern Knights and X-Thieves. I returned to creative pursuits as a performing storyteller in 2005 and have performed all around the state of North Carolina since then. In April of 2014, my first science fiction novel was published. Scout’s Honor spent six weeks on Amazon’s Space Opera best sellers list and was followed by the release of Scout’s Oath in February. My third novel, Scout’s Duty, is coming soon.

This entry was posted in The Hardest Part and tagged aaron starr, bruce bethke, henry vogel. Bookmark the permalink.

One Response to The Hardest Part: Henry Vogel on The Fugitive Heir