Coming to Town: Taylor Anderson, author of The Destroyermen series, for HonorCon at the Hilton North Raleigh/Midtown

Texas author Taylor Anderson is the New York Times bestselling author of the Destroyermen series. A gunmaker and forensic ballistic archaeologist, Taylor has been a technical and dialogue consultant for movies and documentaries, and an award-winning member of the National Historical Honor Society and of the United States Field Artillery Association. He has a master’s degree in history and has taught that subject at Tarleton State University.

The Destroyermen series, beginning in 2008 with Into the Storm, concerns the fate of the United States Asiatic Fleet in World War II, and while I will leave it to you (and Wikipedia) to learn of its real history and fate, Anderson’s books carry a Great-War vintage “four-stacker” destroyer from that fleet (along with pursuing Japanese battleships) into a squall, which acts as a portal transporting both pursued and pursuers into an alternate earth where humans never evolved. There, the two dominant species (the peaceful Lemurians and the warlike, reptilian Grik) are at war, and sides must be chosen, escalating the conflict into a global war that with 2015’s Straits of Hell comprises ten novels, with an eleventh, Blood in the Water, due out in June 2016. (Perhaps I should have read the publisher synopsis of Blood in the Water before asking my final, foolish question, but! as usual, I leave my “own goals” for your enjoyment.)

Anderson headlines a fantastic lineup of military science fiction — including David Weber, Marko Kloos, A.G. Riddle, David Drake, Tony Daniel, and Chris Kennedy — at this weekend’s HonorCon at the Hilton North Raleigh/Midtown, with individual day and full weekend passes still available. It’s a further escalation of HonorCon’s roots as a convention focused almost entirely on Weber’s Honorverse — complete with many attendees in full Royal Manticoran Navy uniform — into a truly full-spectrum military science fiction convention. (Though, still, certainly, with the RMN out in full regalia in full force!) I’m looking forward to catching as much of it as I can.

Here, Anderson took the time via email to answer some questions about Weber, Navy weapons systems research, careless anachronisms, audiobooks, alternate histories, and, yes, a really, really stupid one about Blood in the Water. Enjoy! 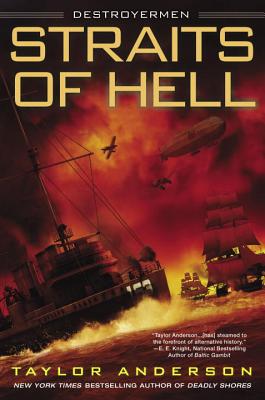 Yes.  I read David’s On Basilisk Station about sixteen years ago and loved it.  I quickly devoured the rest as they came out and always look forward to the next.  I was honored to meet David at DFW-Con, around the time my second or third Destroyermen novel came out.  We had a long, vastly entertaining conversation, and I was amazed to discover I’d become friends with one of my all-time favorite authors!  I hadn’t begun reading the Safehold Series until about that time as well, and one of the things that struck us both, I think, was how much alike we think in a number of ways.  We’ve corresponded since, sometimes just going on for hours about ballistics or historical weaponry.  He called me several months ago and told me about this year’s HonorCon.  I thought “it’s been too long,” and said, “I’ll be there!”

Q: Your military SF concerns Naval battles in both a “mundane” alternate historical setting (actual 1940s ships and armaments) with various technological adaptations from the alternate Earth’s dominant species, wholly original to your work. Have you kept up with current Navy weapons systems research, like the recent demonstrations of lasers and rail guns, which certainly put today’s reality in line with yesterday’s science fiction?

As much as possible, and it’s truly amazing to what degree we’ve made science fiction, fact.  I will always be a historical weapon guy, that’s what I study, use, and write about to a large degree.  “Old” weapons are what I made my living with for many years before I started to write and, in a sense, I still do–through my writing.  But modern–and future–weaponry has always called me as well, and I still love the notion (I’m sure David coined) of thousands of kilometers being “knife-fighting” range!

Q: The best military fiction gets the details as close to right as possible, without letting too much attention to detail derail the plot. Yet the best military fiction does make a few mistakes here and there as well. What are some technical points that you’ve been called out on, whether intentional bending of the rules to serve the action or simply an honest mistake? (If any, of course!)

Absolutely.  I LOVE obscure minutiae, and one of the hardest things to do skip over something you’ve carefully researched and WANT to go on and on about, but you just CAN’T.  In this, I strive to emulate the great Patrick O’Brian.  Just as he could teach us to sail a square-rigged ship in context, without us even realizing it, I try to “trickle” tech into a story, by “showing” it to readers, in context, in use, doing what it does.  And yes, I goof up, and people do pounce!  I’m very glad they do.  It not only shows me they’re paying attention, but I often learn something.  Not to mention, the quicker they “pounce,” the more able I am to fix it for the paperback! Ordinarily, it has something to do with a careless anachronism.  One that springs to mind is when I described a “super lizard” as a “walking backhoe.”  What I SHOULD have said, of course, was “walking steam shovel”–because backhoes as we know them today didn’t come about until a few years later.  I . . . excruciate over some things, then trip up on stuff like that. VERY frustrating. Ha!  Fortunately, I have a built-in out, and I can always say “yeah . . . but in THAT alternate universe . . .”  Nah.  If I do, I’m joking. I take it like a man.

Q: Do you listen to the audiobooks of your books? (A friend who is an audiobook reviewer loves them.)

I’ve heard most of them, and the great Bill Dufris does an amazing job of bringing the story to life.  I have to admit, the first time I heard Into the Storm, it was a bit jarring because Bill’s voices for the various characters weren’t “the ones in my head,” if you know what I mean.  But then they WERE!  Over time, he has become the many voices I throw at him so thoroughly that I “hear” them when I write.  Very cool.  I’ll be catching up on the latest two audios over the next few weeks as I do most of my yearly “long, lonesome drives.”

Q: What is it about military SF in particular that makes radio play and audiobook adaptations so compelling? A hive memory of WW2 radio broadcasts?

That’s a very distinct possibility.  WW2 was quite horrifyingly “futuristic” in its own right, at the time.  Particularly to people back home, hearing about things and places they had no prior knowledge of.  That, or just the old radio shows–that I’m only BARELY old enough to remember.  Then again, the spoken tale is as old as time, dating back to hunting stories around the fire, or the recitation of deeds of honor in great halls festooned with trophies of battle.  There’s something very primal about it, I think.

Q: Another famous WW2-era alternate history, Philip K. Dick’s The Man in the High Castle, is the inspiration of a new TV series. What are some of the alternate histories which most inspired you to write Destroyermen?

None, actually.  At least I don’t think so, and certainly none directly.  I’d read Turtledove’s The Guns of the South, and one of the best, that no one ever seems to remember, The Court Martial of Daniel Boone by Allan Eckert.  Maybe a few more, though the titles escape me just now.  I’d ABSORBED Roscoe’s United States Destroyer Operations in World War II, however, and it surely lurked in my mind for many years, waiting for some kind of vehicle to escape.  But what inspired me to write Destroyermen was a simple conversation with other members of the crew on the set of The Alamo, in 2002.  Inevitably perhaps, it was about “famous last stands.”  I got around to mentioning the ordeal of the US Asiatic Fleet–and nobody knew what I was talking about!  I decided then and there I had to write something that incorporated that near forgotten, forlorn and desperate episode–but I also realized I had to make it fun.  Sounds weird, perhaps, but all my life I’ve dealt with historical absolutes.  I taught history, I made guns that had to be absolutely historically accurate, and I worked on movies in which my goal, at least, was to get my part as “right” as humanly possible.  I enjoyed all those things, but as historically minded as I am, I NEEDED to be able to just . . . make stuff up for a change.  Destroyermen allowed me to honor the veterans of the Asiatic fleet, use hard history, and frankly, play.

Q: Can you give us a little hint for what’s to come next for Reddy and the Alliance, now that the action looks to turn outward from Madagascar again?

Wow.  Hmm . . . You may have noticed that I just posted the cover art and the title of #11, Blood in the Water (due out on June 14, 2016), and a few hints of what’s to come actually can be found in the artwork and the cover synopsis.  And, as usual, the title (simple as it seems) has multiple meanings.  I’ll have to give more thought to what further hints I’ll spill.  I will say that Silva has finally healed sufficiently to have a quite . . . rowdy adventure.

This entry was posted in Coming to Town and tagged honorcon, taylor anderson, the destroyermen. Bookmark the permalink.

One Response to Coming to Town: Taylor Anderson, author of The Destroyermen series, for HonorCon at the Hilton North Raleigh/Midtown