Author Lawrence M. Schoen is a busy man. When he’s not holding court as one of the world’s foremost experts on Klingon, or adding new Conroyverse stories featuring everyone’s favorite oxygen-producing buffalito (think: miniature genetically-engineered buffalo the size of small cats which eat anything and fart oxygen, quite useful in space, eh?), or attending about a dozen conventions per year at which he is a panelist on Star Trek, writing, hypnosis, neuroscience, and more — oh, did I mention he was a certified hypnotist and holds a Ph.D. in cognitive psychology and psycholinguistics, and taught the subjects for 10 years at the college level? — he has been working, in one way or another, on his debut novel Barsk: The Elephants’ Graveyard since 1989. That’s only a couple of years into Star Trek: The Next Generation‘s television run, people.

In addition to his actual, in-bookstore tour in support of the book, which is bringing him back through NC from Feburary 3-5, Schoen has also been on a blog tour, including interviews with The Qwillery, The BiblioSanctum, and GeekDad, which is precisely the sort of well-dserved hospitality he’s engendered with his fantastic Eating Authors guest column, in which authors talk about memorable meals; I mention this not only because I love the column, but because it was a direct inspiration for this column, The Hardest Part, in which today Schoen gives us more than a mouthful about the long road his “emotionally resonant, intriguing fantasy” set in a deep, humanity-less future of uplifited animals (SFSignal) had to take to publication. 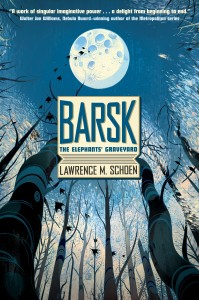 There are a couple things you need to know for this “hardest part” to make sense. First is that I started writing Barsk back in 1989. I finished the book and spent several years trying to sell it, without success. This failure was a good thing because the book was terrible. It was the first novel I’d ever written and I didn’t know much about writing yet and I doubtless managed to make every possible mistake. So I put it in a drawer (as one does) because the ideas underlying the novel were sound, and went off to get better at my craft by writing and writing and yes, writing some more.

Part of that improvement involved enrolling in various workshops, learning from people who had already mastered the craft. At one of these I was taught a technique referred to as “novel breaking” — where a small group of fellow writers basically take your book apart, and help you rebuild it, so that you’re accountable for ensuring that every scene serves the needs of the book, whether it be by advancing the plot or developing characters or otherwise modulating the pace.

After selling Barsk on the promise of an outline and three sample chapters, I assembled a small gathering of authors familiar with the novel breaking process. We met at my house on a Saturday morning. We worked nonstop for about seven hours. Planets were destroyed. Whole solar systems vanished. Characters merged, changed names, gender, species, or were stripped away entirely. Subplots bloomed. Plot threads unraveled, changed course and color and texture and were reknit into steel cable. In this process, the story melted away like so much hot wax, cooled, reformed, and took on a powerful new shape.

Through all of this, I stood before a wall covered with different colored index cards, each identifying a scene, waving a marker like a madman. These cards changed location, changed contents, changed participants. My “helpers” lounged in my living room, sipping hot beverages, munching on gourmet snacks and meals prepared by my wife (a former chef), watching me whirl and scribble and sweat.

We shattered the original novel that I had written, tore apart the outline that I had sold, eviscerated the sample chapters that had convinced a major publisher to buy the book. And then, bit by bit, the novel took shape, a phoenix born anew from the conflagration of an earlier version of the book, spread its wings and flew.

I remember one point where a piece of story that had not previously existed materialized in my mind complete with dialogue, a moment of utter poignancy that I stood for a moment, marker in hand, weeping, trying to explain to my friends why, what I saw, what it would mean, and failing. But I kept that scene, and it’s in the book, and it still makes me choke up.

Anyway, that was the hardest part. Taking a book that I’d carried in my heart for more than twenty years despite its inherent flaws, razing it to the ground, and rebuilding it into the promise that it had always been. It was brutal, soul-baring, exhausting.

The fun part was running into my editor at a convention some weeks later and assuring him that I’d completely rewritten the novel he had bought, and as he stared at me aghast, adding assurances that he would like it even better.

And of course, he did. 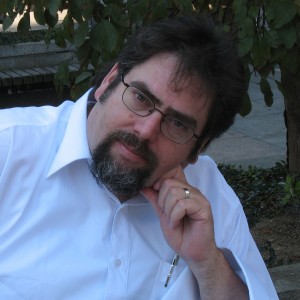 Lawrence M. Schoen holds a Ph.D. in cognitive psychology and psycholinguistics. He’s also one of the world’s foremost authorities on the Klingon language, and the publisher of a speculative fiction small press, Paper Golem. He’s been a finalist for the John W. Campbell Award, the Hugo Award, and the Nebula Award. Lawrence lives near Philadelphia. You can find him online at LawrenceMSchoen.com and @KlingonGuy.

One Response to The Hardest Part: Lawrence M. Schoen on Barsk: The Elephants’ Graveyard