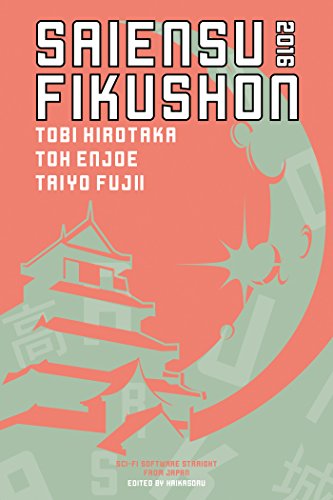 Saiensu Fikushon 2016 (Haikasoru, 2016) is a sushi sampler sized feast of bizarre, compelling, and legitimately technophobia-inducing speculative fiction from Japan, launching a new annual (we can hope!) mini-anthology series that hearkens back (with its conception and cover design, at least) to classic Japanese manga anthologies. Here’s the publisher description:

Three new stories from three of the best science fiction writers in Japan:

“Overdrive” by Toe EnJoe — How fast is the speed of thought?

“Sea Fingers” by TOBI Hirotaka — A small enclave survives after the Deep has consumed the world, but what does the Deep hunger for now?

“A Fair War” by Taiyo Fujii — The future of war, the age of drones, but what comes next?

Saiensu Fikushon is Haikasoru’s new e-first mini anthology series, dedicated to bringing you the narrative software of tomorrow, today. Now more than ever, the future is Japanese!

That “the future is Japanese” quote hearkens back to another fantastic anthology from Haikasoru, The Future Is Japanese, which was somehow published nearly 5 years ago. That anthology, also edited by Haikasoru editors Nick Mamatas and Masumi Washington, was predominantly by English-writing authors, and notably included Ken Liu’s short story “Mono No Aware” which would go on to win the Hugo Award. It also included new English translations of stories by Toe EnJoe and TOBI Hirotaka, whose “Overdrive and “Sea Fingers”, respectively, open Saiensu Fikushon.

“Overdrive” is the strangest of the three stories in the anthology. Concerning the “speed of thought”, its conceit is that we can literally/figuratively/what? “travel” at “Hyperthought” speeds, simply using the power of our imaginations, up to and including (and exceeding) first contact with alien life. It’s completely weird, written in an almost deadpan, dry classic science fiction voice, and while I wouldn’t have been brave enough to publish it, while reading it I was immediately put in mind of some of the stranger stories to come from the pages of OMNI back in the 80s and 90s, and it felt very much “of a like” with some of Bisson’s Bears Discover Fire and Other Stories work. That Bisson collection being one of my favorite books of all time, and this little mini-anthology is off and running. 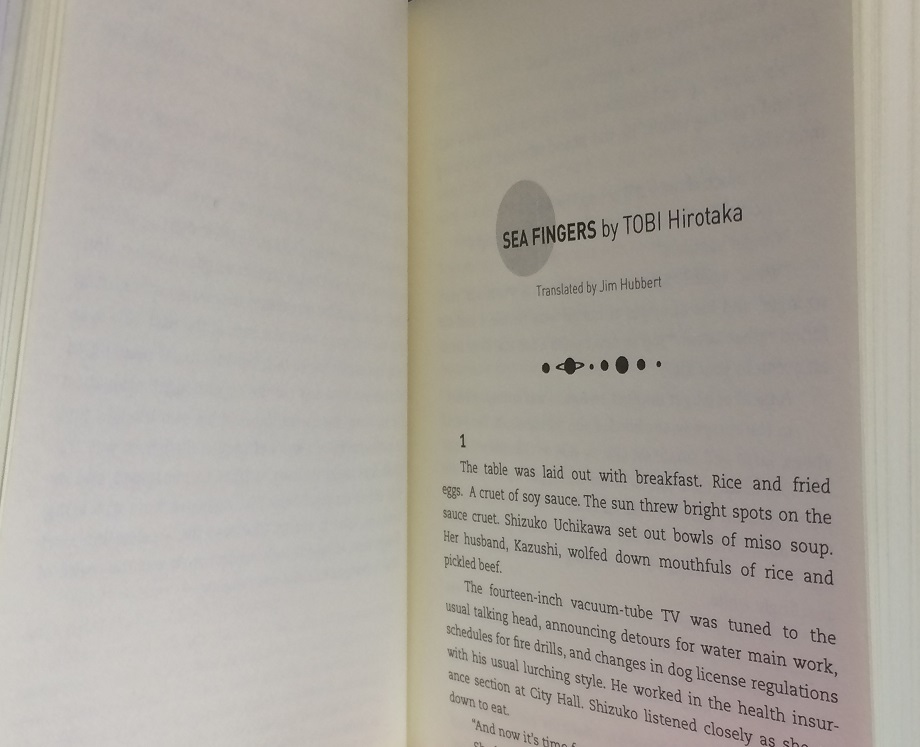 Haikasoru editor Nick Mamatas was kind enough to send me a copy of the limited print edition of the anthology.

“Sea Fingers” is even weirder, and better. A novelette, the idea here is a kind of “grey goo” nanotech apocalypse called “The Deep”, a compressed data ocean that surrounds and frequently threatens a small island which houses the known survivors. There is a beautiful musical metaphor at work throughout the story: The Deep “performs” upon the island, dredging up fantastical and often surreal and changed versions of architecture, statues, whatever; a new kind of work called “acoustic engineering” sees some of these survivors trying to “tease out” useful performances, to get needed items and supplies; and throughout there is a refrain of songs as memory, as interlude, as call and response. I snagged just a bit on some ruffles of repetition and shifting point of view, but overall I was completely floored by this totally strange and fantastic story, its surreal allegories for spousal abuse coming to a dramatic and moving crescendo by story’s end.

In “A Fair War” by Gene Mapper author Taiyo Fujii, which concludes the anthology, we have left the realm of experiments like “hyperthought” and the surrealist imagery of “Sea Fingers” in an award-worthy novella of drones and augmented reality games and terrorism in a near-future China. Fujii’s “Killbots” presaged the actual, horrifying reality which has already come all too soon: cheap drones plus cheap bombs plus cheap facial recognition technology equals directed terrorism at a scale we can hardly begin to comprehend; as humans our ability to invent ways of killing each other always outstrips our ability to defend against such annihilation. Fujii imagines some military-grade countermeasures, but it is with political and social thinking that a possible solution can be found. This is a fantastic work, casting a keen eye across the social and political landscape of China’s ethnic minority populations. Its urban and military settings and technologies seem to combine ideas we here in the West might think to see from William Gibson or Neal Stephenson, through the lens of Hiroshi Sakurazaka, by way of Liu Cixin. On the strength of Gene Mapper and this novella (which I hope David Afsharirad will consider for the next edition of The Year’s Best Military SF & Space Opera), Fujii’s an author to watch for what’s coming and what’s possible in our technological all-too-near future. His Nihon SF Taisho and Seiun Award winning novel Orbital Cloud was published in English by Haikasoru last week.

This entry was posted in reviews and tagged haikasoru. Bookmark the permalink.