Another week has passed, and, lo, there is another local author book newly released to the world. Today, it’s Guardian of Night by Tony Daniel:

A NEW HOPE FOR CIVILIZATION—A LAST STAND FOR EARTH

For alien Commander Arid Ricimer there was no going home. His species was winning the war with Earth, but the civilization he had fought for was gone, destroyed from within by ideologues and bureaucrats. So he does the only thing that makes sense to a person of integrity—he attempts to defect to Earth with his officers and an entire spaceship, a vessel that mounts a superweapon of almost unimaginable power.

Hot on his heels is his former fleet, a force that has already devastated Earth once, and is poised to wipe humanity from existence forever, ready to do almost anything to deny Earth a chance.

To the defenders of Earth he is an enigma—and potentially a Trojan horse. Yet after years of battling back from the brink of destruction, the U.S. space navy has the war-tested heroes to rise to the challenge Ricimer represents—and the danger that follows him—if only those in charge will listen.

The players are in motion and the greatest confrontation this sector of the galaxy has ever witnessed is at hand. Now all depends on the courage of an honorable alien warrior and the intelligence and daring of his human allies.

The book is also available in e-book directly from publisher Baen in a variety of formats, as well as in audiobook, narrated by Victor Bevine (the same voice behind David Drake’s Lt. Leary series) for Audible Frontiers: 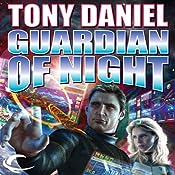 This entry was posted in local-author-release-day. Bookmark the permalink.