Coming to Town, post-visit edition: Deborah Johnson for The Secret of Magic

Mississippi author Deborah Johnson has spent the last few weeks on tour, since the publication of her second novel, The Secret of Magic, in print and ebook from Amy Einhorn Books. From Mississippi, through Alabama, Georgia, and this weekend in western North Carolina with events in Boone and Winston-Salem, leading up to two events this past week in the Triangle Area: Monday night at Quail Ridge Books at 7:30 pm and Tuesday night at Flyleaf Books at 7 pm. The novel is an historical fiction set in Mississippi of the 1940s around a real NAACP legal defense fund case, and featuring a fictional fantasy novel which shares the real book’s title. In that novel-within-the-novel, black and white children play together in the quasi-mythical Magnolia Forest. The book gains national renown, inspires a young lawyer, Regina Robichard, who travels from Thurgood Marshall’s NAACP offices to investigate the case of a black Army Lieutenant murdered on his way home after WW2, and is banned throughout much of the deeply segregated South. Johnson’s novel does not flinch whatsoever from the reality of that South, the era of Jim Crow laws, “separate but equal”, unpunished lynchings, and Confederate Flags flying proudly above the steps of the courthouse. I’ll admit to at first being partially pulled into the book by the back cover copy’s idea of the “parallels” which Robichard begins to discover between the fantasy-novel-within-the-novel and the events of the case, but there is no magical realism here — “just” realism, powerful and compellingly told, with that magical garnish of The Secret of Magic and the pull of childhood’s reading. 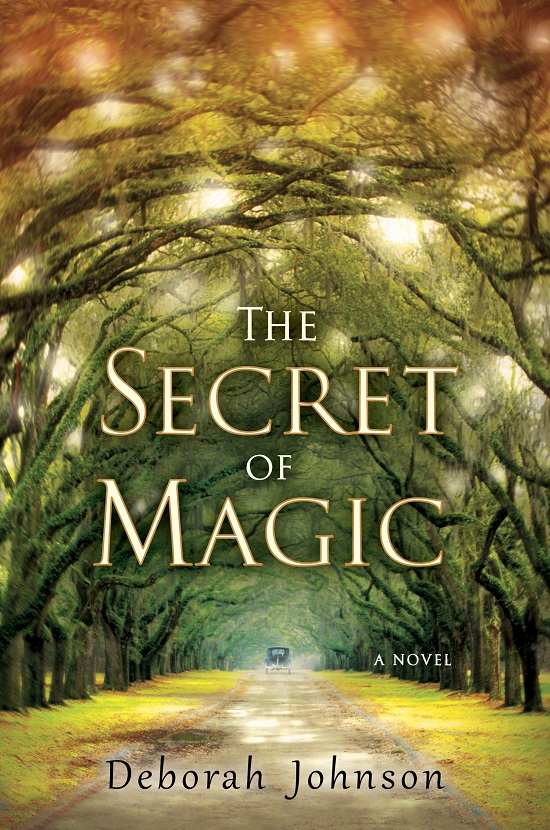 Q: Both of your novels have taken place in your fictional town of Revere, Mississippi, albeit 20 years apart. Does anything tie the two towns together, 1946 to 1966, or are they each their own separate fictional creations?

The town of Revere Mississippi is the same in both novels. I wanted the setting to remain the same but the people to be different. Hopefully, each set of characters brings out the point that I most wanted to address within the frame of a particular time and set of circumstances.

Q: Your actual home of Columbus, Mississippi shares a similar population and geographic location — at least in its close proximity to Alabama — to the Revere of your novels. Is there a real-life analogue for Magnolia Forest, or any of the houses and streets?

There is no real analogue for the Magnolia Forest but almost all of the state of Mississippi was carved out of dense growth. One of the things I particularly noticed when I got here was that you couldn’t turn your back on a vacant lot–little trees would start sprouting up while you weren’t looking. In a very real sense, the forest seems always poised to take back its own. However, like Revere, my hometown of Columbus is built on a grid system. It also served as a hospital town for both armies during the Civil War and so was spared. We have intact, livable houses dating back to 1829.

Q: In your author’s note, we learn that your grandfather’s name was Joe Howard Thurman, sharing all but the patronymic of Lt. Joe Howard Wilson in your novel. I can’t help but imagine that this made certain scenes in the novel very difficult to write.

Q: The inspirations behind many of the characters are made clear in your author’s note — Constance Baker Motley as inspiration for Regina, Isaac Woodard and your grandfather as inspirations for Joe Howard Wilson, and of course Thurgood Marshall as himself, as only he could be. What about Mary Pickett, and especially her “secret” life as a banned novelist? Or Willie Willie?

There are many female Southern writers who contributed to my conception of Mary Pickett Calhoun–Flannery O’Connor, Eudora Welty, Carson McCullers. She’s even got a bit of Zora Neale Hurston in her. When I wrote Willie Willie I thought mainly of my grandfather but also of Holt Collier.

Q: One image and reaction which particularly struck me was Regina’s relationship with the Confederate Flag over the Revere courthouse — from shock that it could possibly be legal, to a growing defiance, a growing use of the flag as an opponent to be opposed and defeated. Confederate Flags still flew over many courthouses through at least 2011, until NAACP cases fought for and achieved their removal in many instances. South Carolina flew the flag over its capitol building through 2000, though it still remains on the State House grounds atop a 30 foot pole. And the flag continues to adorn bumper stickers, license plates, and fly above private residences and businesses. What would Regina make of all this, still going on?

You know, I drove to Greenwood, Mississippi to meet my editor/publisher Amy Einhorn when they were filming The Help there. I was with a good friend, a white guy. On the way back we stopped in Carrollton, Mississippi and what did we see atop the courthouse–the Confederate flag. Big as you please. I imagine Regina would have been as dumbfounded as I was. Still, a lot has changed since 1946 and it is important to remember that so we can change more.

Q: Another thing which really has stayed with me is Willie Willie’s line, after explaining the differing pronunciations of the black “Hairston” and the white “Hairston”, etc., saying “Once you know what you’re listening for the race is always in how things are said.” And then the insistent mispronunciation by Mary Pickett of Regina’s own name throughout the rest of the book.

Actually, Regina pronounced as rhyming with Vagina is the way that many older Southerners say the name. It’s not meant to e disrespectful. That said, there is a real difference between white Hair-stons and black Har-stons even though both names are spelled Hairston. As with many other things, I imagine this was a subtle difference that just grew up and then was universally adopted. Black Har-stons don’t want to be Hair–stons and vice-versa.

Q: When researching the book, did you come across a particular non-fiction book or historical novel which told the stories of Isaac Woodard and/or Constance Baker Motley well enough to recommend? (Doing a bit of my own searching, I only found a regional documentary for Motley and a mention of Woody Guthrie’s folk song about Woodard, and I’d like to learn more.)

I did a great deal of research, much of it in archives, but there were a couple of books I particularly loved. Gilbert King’s Devil in the Grove was right at the top of the list. Even though this book is not specifically about the Isaac Woodard case, it is gone into and you get a very clear feeling of what the LDF was up against in the years immediately following the Second World War. Also Constance Baker Motley’s autobiography, Equal Justice Under Law, was tremendously useful in helping me to imagine what is was like to be a young African-American lawyer in the late 1940s. Mrs. Motley has always been such an inspiration to me.

Q: Your tour for The Secret of Magic has taken you across Mississippi and Alabama, through Georgia, and now across North Carolina, just about the opposite route both Joe Howard Wilson and Regina May Robichard took on their way to Revere. Is there a particular poignancy to that journey and to visiting those bookstores and libraries along the way?

The main feeling I have as I travel is a very real and raw wish that my parents and my grandparents could be taking this trip with me. They all worked so hard and sacrificed so much and I would like them to see that their work and their sacrifices mattered. Things are far from perfect–but they certainly have changed.

Q: I enjoyed hearing you read your own author’s note for the (really fantastically well done) audiobook edition. Were you involved with or have you listened to Peter Francis James‘ narration?

I am working on a ghost story, set in the Forties in the Mississippi Delta–where America’s music began.

You can find out more about Deborah Johnson and The Secret of Magic at the author’s website, deborahjohnsonbooks.com, and follow her on Facebook as well. If you were (like me, alas) not able to make either local event, both stores should have stock of signed copies for purchase.

This entry was posted in Coming to Town and tagged deborah johnson, flyleaf books, quail ridge books, the secret of magic. Bookmark the permalink.

One Response to Coming to Town, post-visit edition: Deborah Johnson for The Secret of Magic