I first heard about Asheville, NC author Alexandra Duncan back in 2011, when her novella “Rampion” (published in F&SF) starting generating a lot of buzz — it would go on to be selected by Rich Horton to appear in his annual “Year’s Best” anthology for Prime Books. Reading “Rampion”, a fairytale-infused historical fiction set in the Caliphate of Al-Andalus, I started following her writing, but… it appears she had something longer in mind, for which some serious waiting would be required. Luckily, I had her previous short fiction — published in F&SF since 2009 — to keep me company. Yesterday, her debut novel Salvage was released in hardcover and ebook [Kindle] by HarperCollins’ Greenwillow Books, as well as a highly-anticipated audiobook edition from Harper Audio. A YA title, it targets a younger audience than has her heady short fiction, but by no means without a literary sf sensibility, bearing themes of feminism and climate change. Duncan also sets her sights on the extra-terrestrial rather than the lush fantasies of her short fiction. But it wasn’t the change of age, or venue, or theme, which gave her the most difficulty. Here, as Duncan writes, sometimes life itself, our own neuro-chemical minds and bodies, can be our own worst enemy.

There are very few careers where you can make having an anxiety disorder work to your advantage. For a long time, I thought writing was one of those few.

When I started writing my first novel, Salvage, I had several short stories and a novella under my belt. I thought I knew what worked best for me as far as a motivation. Write every day. Feel uneasy and wrong if you don’t write – like you left the oven on – so make sure you write every day. Let your characters and plot take over your thoughts until the story is as perfect as you can make it. Send it off into the world.

This worked for me when I was writing short stories. I could let a story consume me for a month or two at a time. I could use my anxiety to my advantage. But a novel is a different beast. In addition to writing, I have a full-time job as a librarian, so drafting a novel takes a year or more of my time, not a few months. That I left the oven on feeling built and built, and every day I didn’t write, I berated myself for being lazy, told myself I was a bad person who didn’t deserve to have her words out there in the world. Instead of motivating me, the anxiety and latent depression I’ve struggled with since my early teens overwhelmed me. Once I finished my draft and sent it off to my first readers, I crashed. Hard.

At 27, I was diagnosed with major depression and PTSD. I ended up on antidepressants for the first time in my life. I had been seeing a therapist for several years before this point and had been limping along without any medicine, because I was worried it would dull my creativity and kill my drive to work. That assumption ended up being completely wrong. It turns out I’m much more productive when I’m not fantasizing about driving my car full speed into a wall or wallowing in a pit of abject self-loathing.

I’m writing about this now because so many other authors I know struggle with depression and anxiety disorders. It isn’t just me. In the months when I was trying to find the right antidepressant dosage and convince myself to keep getting up every day on the off chance that this would be the day the drugs started to have an effect, I asked myself if it was the writing causing this phenomenon in me and my colleagues. Was depression an unavoidable part of being a writer? The myth of The Writer would have us think so. We’re supposed to be troubled souls who drink like Hemingway and flirt with madness like the Fitzgeralds. Being depressed is a side effect of being artistic.

Except, it’s not. For me, writing has always been a way to keep the darkness at bay, to reach out and try to communicate with other people in my own introverted way. Reading helped me escape a troubled and painful childhood, and writing ultimately ended up pulling me through the rock-bottom depression that overtook me as an adult. I cared about my book even when I had stopped caring about myself. The process of editing it and submitting it, first to an agent and then to publishers, gave me a series of goals that kept me going. By the time I had achieved them, I was also on the right medicine and starting to recognize other reasons to keep living.

Since selling Salvage, I’ve written a companion novel which is now in the editing stages and hopefully will be out in the world by 2015. This time around, I didn’t use my anxiety as fuel. I tried to use the joy writing gives me to motivate myself instead. When that voice started up telling me I was a failure for only having written 250 words in one day, I stepped back and tried to give myself a reality check. I reminded myself that I write books because storytelling is fun and satisfying. If it isn’t either of those things, why should I do it? I’m still figuring out the right balance, but now I believe there is a way to write and stay healthy and sane. I don’t have to buy into the myth. I can make up my own way.

“Alexandra Duncan is a science fiction and fantasy writer. SALVAGE, her first novel, will be released by Greenwillow Books, HarperCollins, on April 1, 2014. Her short stories have been published in THE MAGAZINE OF FANTASY AND SCIENCE FICTION and THE YEAR’S BEST SCIENCE FICTION AND FANTASY. She lives with her husband and two monstrous, furry cats in North Carolina. You can visit her online at www.alexandra-duncan.com.” 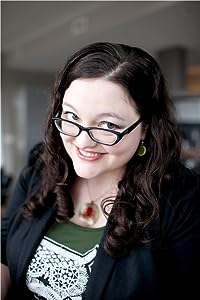 “Salvage is a thrilling, surprising, and thought-provoking debut novel that will appeal to fans of Across the Universe, by Beth Revis, and The Handmaid’s Tale, by Margaret Atwood. This is literary science fiction with a feminist twist, and it explores themes of choice, agency, rebellion, and family. Ava, a teenage girl living aboard the male-dominated, conservative deep space merchant ship Parastrata, faces betrayal, banishment, and death. Taking her fate into her own hands, she flees to the Gyre, a floating continent of garbage and scrap in the Pacific Ocean. This is a sweeping and harrowing novel about a girl who can’t read or write or even withstand the forces of gravity. What choices will she make? How will she build a future on an earth ravaged by climate change?”

This entry was posted in The Hardest Part and tagged alexandra duncan, salvage. Bookmark the permalink.

6 Responses to The Hardest Part: Alexandra Duncan on Salvage