Charlotte-area author Megan Miranda‘s 2012 debut novel Fracture introduced readers to teens Delaney Maxwell and Decker Phillips, the frozen waters of Falcon Lake, and a supernatural mystery both of Delaney’s recovery from brain damage and her inexplicable ability to predict — or perhaps cause? — the imminent death of those around her. Written from Delaney’s point of view, Fracture garnered a starred review from Publishers Weekly among a long list of other accolades, and she next published Hysteria, a standalone psychological thriller. With her latest book, Vengeance, Miranda returns to Falcon Lake, this time from Decker’s point of view. Here, Miranda writes about the difficulties in picking up where Fracture left off. 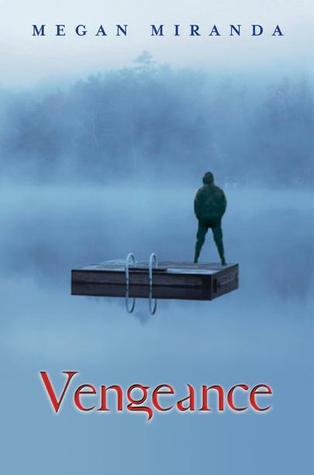 As a general rule, I find the middle third of every book the hardest part to write. The excitement of a new idea gets me through the first third, and the promise of seeing the end usually powers me through the last third—but that middle third, man, I usually have to force my way through it. But at least I’m aware of this pattern. I’ve come to expect it, even.

But when I was writing Vengeance, I suddenly found myself stuck in the beginning, unable to navigate my way through the first third of the book. Vengeance is the sequel to Fracture, and I had originally written Fracture as a stand-alone book—and even though Vengeance is from a different character’s perspective and takes place several months after the end of Fracture, I still found myself frozen by the reality of being bound to everything I’d left myself with at the end of Fracture.

There were hard and fast rules I had developed around a character’s ability to sense death, and I could not change them to better suit a plot point I wanted in Vengeance. And so many of the relationships at the start of Vengeance were strained, broken, or altered because of the events in Fracture. I was dealing with a group of characters who had lost people, who blamed each other, and who were, for the most part, grieving.

I fought with the opening for a long time—how do I repair this? How do I start a fresh book with these characters? How do I have them come together to deal with the new events about to be set in motion in this book?

It took me several attempts before I realized I was looking at it the wrong way. I shouldn’t see this as a hindrance—I needed to use this. And in this way, the story created itself from the strained relationships, from the grief, and from their fear. What happens in a place where there was so much tragedy? What happens to the people who went through this? What might make people believe in a curse? And what might someone hide underneath this? I had to let them show the story that emerged from the ashes at the end of Fracture. Once I embraced that, the words started flowing again.

(For the record, the middle third was a killer again – but at least I was ready for that part.)

Vengeance was published in Feburary 2014 by Walker/Bloomsbury and is available wherever books are sold. Additionally, digital audiobooks of all three of Miranda’s books are available from Audible and via iTunes. (The audiobook for Fracture can be had quite inexpensively by first purchasing the Kindle edition and then adding the audiobook edition.) On May 16-18, Miranda will be at the SC Book Festival in Columbia, SC.

This entry was posted in The Hardest Part and tagged megan miranda. Bookmark the permalink.

One Response to The Hardest Part: Megan Miranda on Vengeance