In the southeast US, MarsCon is one of the best-organized science fiction conventions that focuses on writers and writing, and in this, their 25th year, they had the logistics figured out well.

This year saw a bumper crop of good writers attending with David Weber, David B. Coe, Katherine Kurtz, Alethea Kontis, and Steve White all discussing their writing, signing books, and dispensing advice for other writers. With several Baen authors in attendance, they got a visit from the Baen Roadshow as well, so we got to see all the art of upcoming books.

The con hotel and several next to it were full. Parking was at a premium but they did have crew out to try and send you to where there were spaces. We opted to stay offsite and drive elsewhere for dinner and then didn’t return for evening events. The con space was large enough for the crowds but some of the auditorium style rooms with chairs and table were a bit small for some panels (like the Baen Roadshow). The dealer room had many book dealers and several game dealers as well as artists and crafts people. The tables were spaced well on two sides, but the space at the back between the row against the wall and the row opposite was too tight, if you got people looking at one table you blocked the way for people to get by or look at stuff on the opposite table. So it would be best to visit there on Friday before it gets crowded.

There were some excellent costumes including those pictured. There were also many Honorverse uniformed fans from different ships, as can be expected when David Weber is at a convention. Your Humble Reviewers really enjoyed the round robin musical session on Sunday. Many conventions only have music at times when people are doing panels, having meals after the panel tracks end, or so late on Saturday that anyone needing to be up on Sunday morning has gone off to bed! 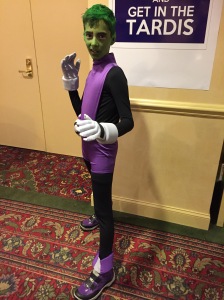 This year most of the science fiction writers and scientists on panels were male and for next year the con chair wants to concentrate on women in STEM careers and women who write science fiction (many of the female guests were fantasy writers). Robot battles with all female teams were also mentioned as a possibility for next year. The female half of the review team has already volunteered for panels and robots for next year. We want next year’s female-focused events to be excellent so the males can’t complain, so all you female science people from the RTP area, volunteer! It’s really only a short drive away and will be fun. This con definitely had an oversupply of males of all ages, so women writers and scientists should volunteer for next year, and bring your younger female friends and relatives with you! Visit www.marscon.net and send email to guests@marscon.net .

One Response to The Exploding Spaceship visits MarsCon 2015