Charlotte author John G. Hartness is a larger-than-life figure in our world, so it’s no surprise that his characters are bold, colorful, and (quite often) either from out of this world or dealing with the things that aren’t. From his first novel The Chosen in 2010 to his “Bubba the Monster Hunter” and “Black Knight Chronicles” urban fantasy series, Hartness has a knack for giving a distinctive — and usually southern and profane, and funny — voice for his characters as well. For his new book, Raising Hell: A Quincy Harker, Demon Hunter Novella, Hartness looked to repeat some of those winning formulae while also creating something new, and in less space than a full-length novel would have allowed. 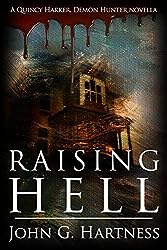 Like Darin last month, I’m an old rock and roll fan, so my immediate inclination was to go all Tom Petty on you and say that the waiting was the hardest part. But there were two things stopping me. First, Darin did it better, and second, it just wouldn’t have been true.

The hardest part for me about writing Raising Hell was making sure the voice of the character was distinctive enough to be different from my Black Knight Chronicles novels and my Bubba the Monster Hunter short stories, while still keeping the parts of my narrative voice that my fans enjoy. It took me a while to develop the character and his voice while I was developing the plot, and working within the framework of a novella as opposed to a full-length novel was another challenge.

In a novella, you have about three to four times as much room as you do in a short story, but only about a third as much real estate as you have in a novel. So if you’re debuting a character and a world in a novella, you have to decide what gets sacrificed. In Raising Hell, I made a conscious decision to write a century-plus old character and give away practically no backstory. I simply didn’t have room in the narrative. It’s not a novel, where I can use up a chapter or two flashing back to the turn of the century (the 20th!) to talk about the first time Harker used magic.

So I decided to drop the most important bits of world-building and character history into dialogue, occasionally using the internal monologue that I get access to by working in first person POV, and leave the rest for a later book. That’s something I can do in a novella series – I can tell the backstory at my own pace, as long as I drop a few relevant bits in here and there along the way. But to work within the scope of a novella, which I wanted to do for a lot of reasons that I won’t go into here, most of them involving money, keeping new releases turning, discoverability and all those filthy lucre-inspired parts of the writing business, I had to keep my backstory and world-building to an absolute minimum. I don’t mind that, because I believe that world-building is like underwear – you need it to be there, but nobody really needs to see it.

So the two hardest parts for me were defining the voice of a new character, and determining which parts of his backstory get told in Raising Hell and which ones get told later. I hope you give the book a shot and let me know how I did.

Straight out of the pages of the legendary vampire novel Dracula comes a demon hunter for the modern world. Mina Murray and Jonathan Harker had a son. They named him Quincy. His guardian angel calls him Q. Dracula calls him nephew.

Demons call him The Reaper.

“There are things in this world that men and women aren’t meant to understand. We aren’t supposed to know these things exist, much less how to fight them. The things that go bump in the night, the monsters in the closet, the shadow out of the corner of your eye — that’s where I live.”

This exciting new series from the author of The Black Knight Chronicles and the Bubba the Monster Hunter short stories is a walk through the dark side, where things go bump in the night, and somebody has to bump back. Quincy Harker is that somebody.

[More: You can also read a review of the book by fellow NC author Jay Requard.] John G. Hartness is a recovering theatre geek who likes loud music, fried pickles and cold beer. John is an award-winning poet, lighting designer and theatre producer, whose work has been translated into over 25 languages and read worldwide. In addition to his writing, he’s also the host of the highly entertaining YouTube/podcast interview series Literate Liquors where his guests have included Jay Requard, Misty Massey, and (most recently) Tonia Brown. And! He’s the editor of both The Big Bad and (forthcoming February 24) The Big Bad 2, an anthology series which features many NC and regional authors. His first novel The Chosen is now available in audio (narrated by Andrew McFerrin), as is Hard Day’s Knight: Black Knight Chronicles, Book 1 (narrated by Nick J. Russo for Bell Bridge Books).

This entry was posted in The Hardest Part and tagged john g hartness. Bookmark the permalink.

One Response to The Hardest Part: John G. Hartness on Raising Hell