Lynne Hansen and Jeff Strand are one of horror fiction’s power couples. A perennial host of the Bram Stoker Awards, Jeff blends humor and horror in acclaimed novels like Pressure and his short story collection, Dead Clown Barbecue. Lynne’s prolific in YA horror (The Return, The Change) as well as working in film (He’s Not Looking So Great, Chomp). And there is absolutely no truth to the rumor that in their last trip to North Carolina, Jeff failed to finish his side of hush puppies at a Durham BBQ restaurant and paid a fearful price.

Q: What brings you to the Triangle?

Lynne: The Nevermore Film Festival at the historic Carolina Theatre Durham. And friends. (Definitely not the snow.)

Q: Tell us about the films you have showing at Nevermore.

Lynne: Chomp is a short horror comedy about a little old lady named Millie who is determined to prove she’s captured a real zombie—even if he’s not one. Last weekend at the GeekFest Film Festival at Shock Pop Comic Con in Fort Lauderdale, Chomp won Best Short—and our very first Best of Fest award. I couldn’t be more tickled.

Jeff: Gave Up The Ghost is also a short horror comedy, directed by Gregory Lamberson. It’s about a very pretentious writer who loses his ultimate masterpiece novel in a computer crash, and ends up seeking supernatural assistance to retrieve the file from the netherworld. It also features brief appearances by zombies, vampires, mummies, cannibals, and Bigfoot. 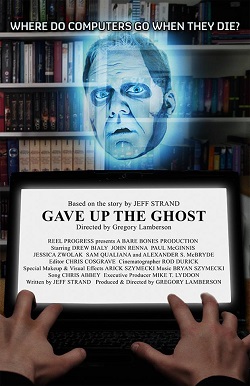 Q: Both of you come from a background in writing fiction. What led you to working in film?

Lynne: Before I started filmmaking, most of my story ideas come to me in novel form, so that’s what I wrote. My first script, a short called He’s Not Looking So Great, was the first story idea to come to me visually. I saw camera moves and heard the words as dialogue, so I wrote it as a short film. A filmmaker in New Orleans, Gregory G. Kurczynski, optioned the script and produced and directed it in 2013. Chomp was the second story idea to arrive in my brain visually, but this time I decided to try to not only write it, but to direct it as well. It was one of the hardest things I’ve ever done, but also the most fun and most rewarding.

Jeff: If you write enough, and make enough connections at various events, eventually somebody will say, “Hey, there’s an anthology film called Creepers which is going to have four adaptations of short stories. Do you have anything that could be made into an extremely inexpensive 18-22 minute movie?” Or at least that’s what happened to me. Mike T. Lyddon, the producer, asked Greg Lamberson to direct something, and Greg reached out to me.

Q: What are your favorite horror movies?

Lynne: Shaun of the Dead because I love the mixture of horror and comedy and the lean, precise writing. Almost every bit of dialogue early on in Shaun of the Dead references something that happens later. I tried to do something similar in Chomp. In the primary soundtrack song, “It’s a Beautiful Day” by Claire and the Potatoes, you’ll hear references to things that are either about to happen or will happen by the end of the film.

Jeff: Shaun of the Dead for sure, and also Return of the Living Dead, Tremors, The Texas Chainsaw Massacre (the original), The Blob (not the original), May, Tucker & Dale vs. Evil, and Army of Darkness. You’re Next would’ve been one of my all-time favorites except for the %$@# shaky-cam.

Q: Is it going to be all films from now on, or are you still writing fiction as well?

Lynne: The experience of creating Chomp made me realize that although I’ve always been a storyteller, I’m now a filmmaker instead of a novelist. I’m not saying I won’t write another novel, and I definitely have a nonfiction book idea in the works, but I foresee my next few major projects as films. I love the collaborative nature of filmmaking. It’s not just me in front of a computer. And I am totally jazzed at the accessibility film has. More people have probably seen Chomp than have read my last book. I like that.

Jeff: I’m still very much a novelist who just happened to have a short story adapted into a movie. I’d love to have ALL of my fiction adapted into movies, but my focus will continue to be on writing books. A feature film version of my novel Pressure has been in development for several years. A couple of hot young screenwriters tackled it for a few drafts, and then (in desperation?) the producer asked me to write the script. Whether or not a Pressure movie will be coming to a theatre near you is pretty much out of my control, so for my own mental health it’s better to concentrate on the books!

Q: What are the perils of a two-writer household? What about the rewards?

Lynne: We’ve been married 17 years now, so the perils are pretty manageable. We don’t generally compete against each other, so that helps. When I was writing YA, he was more adult horror and thrillers. Now that he’s doing YA as well, I’m more into film. Now that both Chomp and Gave up the Ghost are both making the film festival circuit, it’s a little bit more…interesting. For example, Jeff got notified that Gave up the Ghost got into the Nevermore Film Festival an entire hour before I heard that Chomp had been accepted. That was a pretty tense 60 minutes, I tell you, because we both REALLY wanted to come to the festival.

On the positive side of being married to another writer, neither of us gives the other grief when we’re on deadline. Someone always remembers to feed the cats. And we get to spend gorgeous afternoons doing what many non-writers would consider boring. We sit on the back porch and write. Or if we’re feeling adventurous, we pack up our laptops and go to a park and write. Mundane bliss.

Jeff: There are elements of this business that are absolutely insane, and it’s nice to have a spouse who will go along with the insanity. I was paid for the film rights to my short story, and I was also paid for writing the script…and then I immediately spent most of the money on plane tickets and a hotel stay so I could be on the set. When you add film festivals, I’m way in the red for Gave Up The Ghost, and I’m just the screenwriter. A civilian spouse requires more work to convince that this is a good idea. The peril, of course, is that you have TWO people in the household who are financially irresponsible.

Q: If we go back to Johnson Family BBQ in Durham, are you actually going to eat all of your hush puppies?

Jeff: They had outstanding BBQ, but I’m not a fan of hush puppies. I’m not sure why anybody would waste valuable stomach space on them when other options are available.

Many thanks to Lynne and Jeff for taking the time answer these questions. You can meet them this weekend at the Nevermore at the Carolina Theater, where both Chomp and Gave Up the Ghost will be screened. You can find Lynne online at http://www.withoutwarningmedia.com/, while Jeff can be found at https://jeffstrand.wordpress.com.

Durham author and videogame writer Richard Dansky is the Central Clancy Writer for Ubisoft/Red Storm, with his most recent title being Tom Clancy’s Splinter Cell: Blacklist. He has published six novels, most recently Vaporware from JournalStone, and the short story collection Snowbird Gothic. Among his upcoming projects is developing the 20th Anniversary Edition of the legendary tabletop RPG Wraith: The Oblivion, from Onyx Path. He heartily encourages people to do terrible things to his book at http://pdtttmb.tumblr.com.

2 Responses to Coming to Town: Lynne Hansen and Jeff Strand for The Nevermore Film Festival, interviewed by Richard Dansky