Karen is a teenager in Rapid City who works in a brothel. She’s bright and inquisitive, qualities which lead her into trouble but also allow her to learn some information that is useful to Madam Damnable, her boss.  Rapid City feels like a strange steampunk San Francisco mixed with Seattle. The city is so textured and vibrant that it is itself a character in the book.

Many types of characters populate this novel, including a wide variety of ethnicities and sexualities, including Karen herself.  Madam Damnable does not allow anyone to be mistreated or looked down upon and Karen follows her example. However, the setting is Victorian in flavor so the views of society and the law often conflict with the views held in the brothel.

The story structure is that of a mystery with both private detective and law enforcement characters present in the forms of Karen (the detective) and Marshall Reeves (the law enforcer). The marshall has a Native American sidekick, and so reminded Your Humble Reviewers of a more sophisticated Lone Ranger and Tonto. As with all good detective stories there is some romance in there as well. Because Karen is so young, it is really her first relationship. Her fumbling about trying to figure out how to approach Priya, a boyish young Hindu woman is quite adorable and very believable. Teenagers in love can be so sweet that adults want to smack some sense into them! It takes the girls a bit to sort out their relationship and having the confusion of a brothel fire just added to the messed up nature of teenage romance. 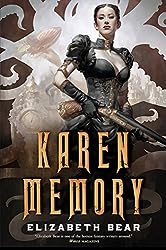 The clothes are described in detail and we liked that the men and boyish women got cool descriptions of their clothes too, not just the gowns. Also we liked how Bear demonstrated that class was depicted by the clothes and that this could be manipulated to make people see what you wanted them to.

The steam mech sewing machine was quite cool and used for several functions beyond sewing great gowns. The use of airships and submarines added interesting transportation complexities to the plot. The technology has a steampunk-style fantasy logic, so the odd things that some of it does are acceptable. The fantasy element is clear enough from the beginning that Angela’s engineer’s brain got the message to ignore realistic rules, that it was more like Star Wars tech rules, so that we didn’t get pulled out of the story.

Overall, it is a very interesting and quick read, one which kept Your Humble Reviewers up far too late finishing it. The book has a very sexy cover illustration, but it would have been nice to see Priya and that amazing sewing machine as well. This setting and cast of characters have great potential so please write quickly, Liz Bear, so we can read more soon!

Adult content note: While the setting is a brothel and some sex and violence are mentioned, none to speak of is on camera so it is a good read for more mature teens and adults. There are victims of violence against women depicted but sexual details are not dwelt upon and the result of the violence is not detailed. The situations dwell more on the characters’ reactions to someone who could do such horrible things. This would make a good family read for Mom with teenage girls in order to bring up some normally uncomfortable topics.

This entry was posted in The Exploding Spaceship and tagged elizabeth bear, karen memory. Bookmark the permalink.