New York Times bestselling comic fantasy author Christopher Moore was last in town the May before last in support of The Serpent of Venice, the second of his novels after Fool to feature “Pocket”, Moore’s expanded and hilarious reinvention of The Fool from King Lear. He’s also the author of Lamb: The Gospel According to Biff, Christ’s Childhood Pal and Sacré Bleu: A Comedy d’Art in which the apparent suicide of one Vincent van Gogh is investigated by a baker with whom van Gogh happens to have attended art school. But! Before you get the wrong idea — as I foolishly did — that Moore has a flair merely for things European and ancient, let me go back to the beginning.

Ohio-born San Francisco author Christopher Moore’s 1992 debut novel Practical Demonkeeping introduced readers both to Moore’s wit and to his soon-to-be interconnected novels set in and around a supernatural-infused California, replete with demons, vampires (Bloodsucking Fiends: A Love Story), gods of various pantheons (Coyote Blue), and Death incarnate, along with recurring characters and cameo appearances from detectives to shopkeepers and even Rastafari. It’s a richly textured world, though there’s absolutely no required reading order, other than the strong recommendation to read actual series in order. Which brings us to… 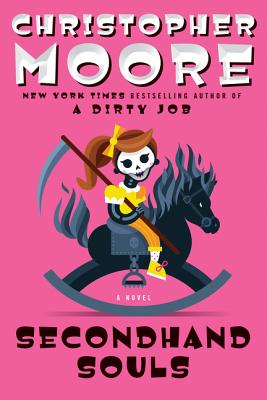 Moore returns to town this Saturday (September 5, at Quail Ridge Books at 7 pm) for his just-released 15th novel Secondhand Souls, a direct sequel to his 2008 Quill Award winning bestseller A Dirty Job, in which acknowledged “beta-male” Charlie Asher stumbles from minivan-driving secondhand store proprietor to a new career as a death merchant, one of several such colorful characters collecting the souls of San Francisco’s departed and ushering them safely onto their next lives, against the gathering forces of the underworld. Meanwhile, Asher is trying to raise his daughter Sophie, in whom Death Incarnate also has a significant interest.

In creating a sequel to A Dirty Job, Moore had the difficult task of revisiting a novel which while it didn’t quite end with the finality of William Gibson’s famously sequel-resistant, last-minute closing “He never saw Molly again” certainly felt complete, with a climactic final battle, sacrifices made, and a fantastic epilogue giving many major characters a more-or-less fullness of moment. (Some, er, more full than others. Eek!) One major new component to Asher’s San Francisco is a focus on the Golden Gate Bridge, both as a conduit for conflict and as the setting for some fantastic stories told by the ghosts who haunt it. (One such tale, “Friends of Dorothy”, is available on Moore’s blog as an excerpt of the novel.)

Another major and delightful development concerns the now 7-year-old Sophie, who has developed both a sailor’s vocabulary and a taste for terrifyingly hilarious statements about death. Along with these new wrinkles, a familiar cast of characters assembles to figure out what’s going wrong this time, and what they’ll have to do to stop it.

Moore’s books are wildly motley, just like the real world, with deftly- and deeply-handled characters from various backgrounds, ages, flaws, and religions; while he certainly has the satirist’s or absurdist’s eye for the possibilities of humor there, he treats his characters mostly with kindness and respect, and that includes having them sitting shiva or earnestly praying as a natural outgrowth of their characters. He was also kind enough to give of his time via email for a brief interview. I refuse to believe I’m actually the first dullard to assume he was British, but apparently I can claim the dubious distinction of being further dumb enough to actually ask. So. There’s that. We also talk about what he’s reading and eating while on tour. Enjoy!

Q: In a CNN interview about Lamb you mention that some readers assumed (variously) that you are Catholic or Jewish; I have to admit to assuming (incorrectly!) that you were British. It’s the standard R.P., I think, of the comic fantasy genre for me. Until corrected, I even read A Dirty Job with a British accent in my head. (Oops.) Do you get that a lot, too?

Actually, this is the first time.

Q: Comic and especially satirical fantasy often seems to be on the cusp of being “accepted” by the literary mainstream, and then… And then, you get something like the Jonathan Jones article yesterday in The Guardian dismissing Sir Terry Pratchett as a “mediocre writer” while also tossing Ray Bradbury onto the rubbish heap of literary history. Do you view your own work as “literature” or is it something you spend much time thinking about?

I don’t think about it much. I set out to entertain the reader, and in the process I may write a lyrical passage here or there but I don’t really think about or care how it’s viewed by critics who are looking for something else. Seventy years ago Raymond Chandler picked up the mantle to defend crime writers as literature, saying something along the lines, that literature of entertainment is only regarded as “literature” with the passage of time. Mark Twain, Rudyard Kipling, William Shakespeare and Herman Melville were all writing literature of entertainment. Whether you consider what they did as literature now is whether you like to view a piece of writing on its own terms or through some template of deconstructive study. I write books that I hope will entertain readers and make them laugh. My books are taught in dozens of universities, including seminaries, I don’t care if they are considered literature now and I certainly don’t care how they’ll be regarded years after I’m dead.

Q: With Secondhand Souls you return to the story of Charlie Asher, whom we last saw almost 10 years ago in A Dirty Job, here picking up right after A Dirty Job‘s character-by-character epilogue giving everyone their own “walking off into the sunset” moment. Did you think you were done with Charlie’s story, and if so, what made you simply have to take up his (and his motley band of San Franciscans) story again?

Yes. I didn’t write A Dirty Job with the idea of writing a sequel, but so many readers have asked me for one over the years that I was forced to consider it – think about it – but I didn’t want to write the same book twice, so I wanted to bring a major new element to the story, and the element turned out to be the Bridge and the Ghosts of the Bridge.

Q: Sophie’s swearing clearly sets a new high water mark for the under-7 protagonist category, and there are few things more disturbingly hilarious than a little girl quoting Oppenheimer. You’re often credit with caring for all of your characters, though I get the feeling that Sophie both has an extra-special place in your authorial heart, and that she may have run away with this book, just a little.

I love the juxtaposition of cute and dark in Sophie and I play on that quite a bit. She’s a little kid, but she has a big part in the story, and the fact that her world is sort of populated by snarky smart-asses probably added to her character development.

Q: You’re a week into a month-long book tour for Secondhand Souls. What books are keeping you company from stop to stop?

I just finished Don Winslow’s Savages and I’m also reading Pynchon’s Inherent Vice. I’m planning on writing a Noir story next, so I’ve sort of been bouncing from James M. Cain, to David Goodis, to Dashiell Hammett, to Jim Thompson, to Chester Himes over the last few months to pick up the flavor of the genre.

Q: When on tour, do you keep your dining familiar or do you tend to adventure out into local cuisine? Any particularly memorable meals from this or previous tours?

Dining is a problem. Most of my events are at dinner time, and I need to eat before the event or I fade before I finish, so I mostly eat what I can grab and eat. Some of the hotels stop room-service before I return, so if I haven’t been able to stash a sandwich in the mini-bar, I end up eating Goldfish Crackers and candy bars for dinner. I think the most adventurous meal this tour was a package of Sour Patch Kids and a small can for Pringles. (By the way, when I’m home I eat mostly lean proteins and salads, so this kind of eating is not ideal for me.)

Q: Does any of your “That Author Guy” merchandise come along on tour with you?

Not any more. Most of it’s not even available. My merchandise guy went off to become a slack-key guitarist and all of his machines and infrastructure went with him. I was never directly involved in the merchandise business and 100% of my share always went to MS Research, so it’s only the charity that’s missed it.

This entry was posted in Coming to Town and tagged christopher moore, quail ridge books. Bookmark the permalink.