Coming to Town: Robert Beatty for Serafina and the Black Cloak at Quail Ridge Books and Triangle Reads Moveable Feast

Asheville author Robert Beatty has a problem we might wish on all of our favorite authors: his Disney-Hyperion debut novel Serafina and the Black Cloak is selling more quickly than it can be restocked, even by online behemoths Amazon.com and Barnes & Noble. Historically-set at the end of the 19th century, the novel opens with the eponymous Serafina skulking through the shadows of the recently-completely Biltmore House, hunting rats. Before long, however, she’s stumbled onto something far worse: a mysterious stranger has just caused a terrified girl to disappear into the swirling darkness of his black cloak, and now his attention is fully on Serafina herself.

A champion fencer, author Beatty has plenty of experience with lightning-quick reflexes, and as a fan of Tolkien, T.H. White, and Gene Wolf, he’s certainly well-versed in both Old and New World fantasy storytelling. Debuting at #3 in The New York Times bestseller list upon release, both readers and critics (Kirkus Reviews, School Library Journal, Publishers Weekly, and the Historical Novel Society, among others) agree the technology entrepreneur-turned-author’s synthesis of these influences is a compelling, spooky read for both young readers and grown-ups alike.

This weekend, Beatty is one of the guests at the Southern Independent Booksellers Alliance trade show at the Hilton North Raleigh/Midtown, where he’ll be taking part in SIBA/Triangle Reads Moveable Feast of Authors on Sunday afternoon, before which he’ll be in Raleigh for a (fantastically well-attended, if the Facebook event RSVP count is to be believed!) reading and signing at Quail Ridge Books on Saturday at 6 pm. I’m grateful to Mr. Beatty for his time via email for this “Coming to Town” interview, and hope you enjoy his answers about his success, his goals in writing the book, the short-film quality book trailer, and what’s coming up next. Enjoy! 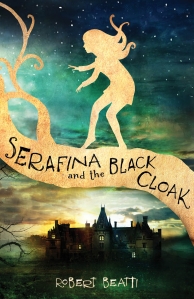 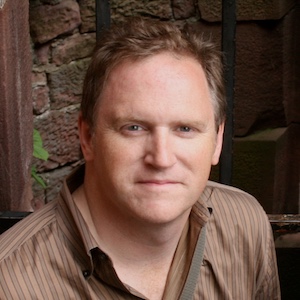 Q: I suppose it’s a good problem to have when even Barnes & Noble and Amazon literally can’t stock your book fast enough. Have you been surprised at the overwhelming response to Serafina’s story?

I put my heart and soul into writing Serafina and the Black Cloak, so I was hoping people would enjoy it, but, yes, I’ve been very pleased by how deeply people love the character and the story.

Q: The Chapter 1 excerpt nearly had my head spinning: is Serafina a cat? No, but wait, why is she living in the basement? And how can she see in the dark? Who (and what!) is this incredibly creepy man in the black cloak, and will Serafina get away? It’s not a first chapter where I tell my daughter, “OK, now, good night, sweet dreams!”

The first chapter starts out quietly, giving you a feeling for Serafina’s life living secretly in the basement of Biltmore Estate, but it very quickly ramps up to full-on action. And, yes, the book is quite spooky, especially the first and second chapter. We recommend the story for adults and young readers 8 and above.

Q: You mention in describing the audiobook edition that Serafina and the Black Cloak was specifically written to be narrated out loud. Can you detail some things you did differently that make this so true?

To me, writing a novel has always had a verbal storytelling element to it. When I write, I often speak out loud and type at the same time, as if I’m telling the story to someone. Also, when I work on the story with my daughters, I usually read the story to them out loud, and we discuss it as we go. The result is that my words, sentences and cadence are all chosen not only for meaning, but for the way they sound when spoken out loud.

Q: I can certainly see the influences of Tolkien and T.H. White, as well as why School Library Journal compares it to the works of Neil Gaiman. Yet there’s something essentially American here, too, that I can’t quite put my finger on, perhaps masked a bit due to Biltmore’s intentional nods in both architectural style and estate lifestyle to the Old World, making some of the “American children’s fantasy literature meets Downton Abbey” quips that I’ve seen in reviews a little more apt. (Well, that, and the very stylish book trailer!) What are some of the “High Country” influences that you brought into your novel?

My vision when I wrote Serafina and the Black Cloak was to write something that had the feel of an Old World story (which I have always loved reading), but to give it a strong American setting and sentiment. So, when I sat down to write the story, one of my main goals was to capture a sense of the mystery, beauty and ruggedness of the Blue Ridge Mountains, as well as a little hint of its people and folklore. For example, here and there I tried to use words and ideas that are part of the old mountain culture, like when I used the words haint (ghost) and catamount.

Q: Have you read much of your fellow North Carolina middle grade fantasy authors’ work, such as John Claude Bemis, Stephen Messer, and Ursula Vernon?

Actually, I have not. I tend to read widely, usually outside the genre, both fiction and nonfiction.

Q: You already had literary ambitions 10 years ago when you became involved with Narrative Magazine. What are some of the bigger writing lessons you learned in your 8 years there?

Narrative Magazine is one of the most prestigious literary magazines in the country, so I was honored to work with them in a variety of ways for eight years. First and foremost, the two founders and editors of the magazine were my writing mentors during that time. I worked closely with them to improve my writing skills. At the same time, I was involved in the technical and business management of the magazine, so I had a wonderful glimpse into the business side of the publication world. One of the main things I learned was that although publishing is indeed a business, what drives it day in and day out, is a love for good stories and an appreciation for both authors and their readers.

Q: Relatedly, what if any skills do you think transition well between your tech career (as an inventor and entrepreneur) and your new career as an author?

This is going to sound strange to many people, but I find that there are many similarities between engineering, software programming, and writing fiction. In some ways they are totally different. But in other ways, they require creativity, imagination, an attention to detail, thinking about structure and flow, problem solving, and so on. To me, it’s all a natural fit. Once the book was published, my entrepreneurial tendencies took over and started focusing on the best way to get it out into the world where people might notice it. For example, we created [the] video book trailer to show people what the book was about and hopefully get them interested in reading it.

Q: You were at the Bookmarks Festival in Winston-Salem this past weekend, and will be at both the SIBA trade show and a reading at Quail Ridge Books this coming weekend. Are you enjoying that part of the author life?

Like many writers, I am an introvert. I enjoy spending hours alone thinking about and working on my stories. However, I have to say, now that I’ve been getting out into the world a little bit, I totally LOVE meeting and talking to fans of Serafina and the Black Cloak. Everyone is so kind and warm and generous. I love their enthusiasm for the book and their genuine support for my family and me.

Q: While a sequel to Serafina is surely high on your readership’s list of demands, you and your daughters have a much more modern (even futuristic) hobby interest in robotics which seems also to beg to be a part of a future, unrelated book. Do you have any books under contract that you can talk about, or hints as to what might be coming next from you?

Right now, I’m totally focused on writing Book 2 and Book 3 of the Serafina series, which Disney Hyperion wants to publish as soon as possible. My daughters and I also continue to build robots together, which is always fun for us.

This entry was posted in Coming to Town and tagged quail ridge books, robert beatty. Bookmark the permalink.

One Response to Coming to Town: Robert Beatty for Serafina and the Black Cloak at Quail Ridge Books and Triangle Reads Moveable Feast