The Exploding Spaceship Reviews Windswept, The Dragon Engine and Hexomancy

This story chronicles the adventures of Padma Mehta, a labor organizer on an alien planet which has a very restricted economy that depends upon the growth of a single plant species. The plant is sent off-world by the ton because it is used for energy/fuel for modern technology. Corporations have workers who are really slaves (sounds familiar, right?). Independent union workers, corporate slaves, crop failures, and bad liquor make for an exciting backdrop for Padma to try to save the planet.

She meets some interesting people from off-planet and finds out some secrets about people she thought were acquaintances, friends, or enemies. Padma has a history of sleep problems because of a bad sleep drug that was given to her for interstellar travel, and this causes her to self-medicate more than is really a good idea. Padma is saving her money to buy a rum distillery which would solve two problems: employment and alcohol supply. She gets accused of crimes she did not commit and must solve the murder and sort out the weird plant disease in order to clear herself. Every time she has to pay a fine or bribe someone during the investigation she gets more frustrated as her savings shrink.

The universe of Windswept is definitely not a nice place to live, although it is very interesting and complex place. The divide between the haves and the have-nots is tremendous and the middle class seems to have shrunk to basically nothing. The real world is headed this way, but is not as bad as this setting. The characters do have hope though, and there are some people fighting against the worst of the corporate slave culture. For all of its showcasing the worst of the corporate world, the book is rather upbeat. Padma is a tough woman fighting to get herself and others out of the corporate rat race.

This is a quest fantasy with many new twists added to an old type of plot. First of all the main characters are a party of older adventurers who get sucked into going on one final adventure because one of them is terminally ill. Beetrax is a huge bear of a man who cons the others at first, then when he finds out his friend is ill, he appears to honestly want to help. However, he is such a con-man that no one else in the party is really sure about his motives, even once they leave on the quest.

Beetrax’s information about the trip indicates that the correct areas of the mountains can only be reached in the winter when there are ice bridges, so the party has a very cold journey which ends in an avalanche and some other unexpected events. The dwarves who were supposed to have died out long ago turn out to not only be not dead, but also quite irate at the human incursion.

The dragons turn out to have been held as slaves to the dwarves for years. They are awoken and are not very happy. There are three of them and they all appear to be distinctive, but they only appear briefly in this volume so their personalities are not really developed yet.

Our adventurers do end up going on a quest, but it is not the one they set out to undertake. The party consists of several types of characters: a large fighter with a large ax, a fast swordsman, an archer, a healer, a ninja, and the handsome fighter who gets the girl. All have quirks which give them interesting behaviors and personalities. They vary across the spectrum in sexual identity, clothing choice, and primary weapons.

This is a well written fantasy that moves quickly. There are multiple narrative threads which are woven together well. The older adventurers are quite fun with their histories together making for some interesting scenes. There is a romance or two budding, but Your Humble Reviewers won’t give away who is involved. This is a good choice for fantasy readers, especially those who can appreciate the adventurers being slightly older. It will be interesting to see how things go in future volumes with the dragons and dwarves. 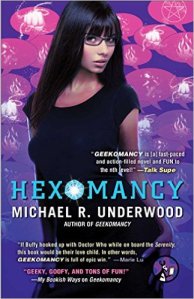 Ree is back in a new book. Grognard’s grand opening after the attack in the previous volume is the big event in this book. Also there is a trial of the woman accused of the attack. She and Ree end up battling it out in a virtual world, which is even cooler than it sounds but is definitely not easy for Ree, as she doesn’t have experience with virtual reality.

Ree’s relationship with Drake takes some definitely interesting romantic turns in this volume. But as a consequence of events the magical nature of the world is revealed to all Ree’s friends. This means her relationships with them take a beating but she ends up with more allies in the end. Eastwood is annoying as usual. Ree’s mother plays a bigger role in this volume than in any previous and the ending means she will continue to be present in Ree’s life in some ways.

Ree has to go into a virtual world to rescue someone so we see an interesting view of online universes and chatrooms as they are in Ree’s world. People can end up dead if they go into virtual and the power to their computer portal goes down. It takes everyone from Grognard’s and some extra medical help besides that to get everyone out safely.

This is a quick, fun adventure story, but it also has some things to point out about getting too sucked into your other reality. Games can be so engrossing that you forget everything else, including things you should care about like your spouse, children or employees.

The romance in the book is very believable, with some confusion, real world interruptions, and dates turning into times they get into trouble (being a magical hero makes dating difficult). Twentysomethings and those who were twentysomething once can all appreciate the problems of balancing relationships, work, and hobbies.

The setting feels alive. Grognard’s would so be a place Your Humble Reviewers would love to visit! We are both old paper-and-pencil RPG gamers and love comic books, so the cultural references and all the memorabilia Ree handles reminded us of our younger days when writing and the day job didn’t take so much time. We think most geeks of any age will appreciate the character they can identify with.

For a fun urban fantasy read, this is the best series out there!

One Response to The Exploding Spaceship Reviews Windswept, The Dragon Engine and Hexomancy