Coming to Town: Julia Elliott for The New and Improved Romie Futch, at Quail Ridge Books and The Regulator Bookshop

South Carolina author Julia Elliott‘s remarkable collection The Wilds was one of the best books of 2014. I absolutely loved it: Levitating old church ladies warning their granddaughters against hellfire; Exoskeleton-assisted escapes from nursing homes; The dogpocalypse; Every story a miniature world we get to step into for a little while. With her new book The New and Improved Romie Futch, we get a story we get to step into for novel length, complete with taxidermy and cybernetics and biotechnology and a quasi-mythical “Hogzilla”. Elliott’s work defines in weird, delightful prose an all-too-near “New South” that’s in turns hilarious (seriously laugh out loud hilarious) and wondrous and frightening, and her new novel has dark comedy and imagination to spare, as Kirkus Reviews will tell you. Elliott’s reading last year at The Regulator was highly entertaining, and this year she’s back for not one but two events: Friday, October 23 at Quail Ridge Books [Facebook], and Saturday, October 24 at The Regulator [Facebook], both at 7 pm. If you want a sampling of what to expect, her recent personal essay for the NY Times (which could have been lifted straight from a short story in The Wilds, or at the very least the direct basis for one) and an excerpt from Romie Futch are great places to start. Here, Elliott answers a few questions about short stories that won’t be contained, her “epic baboon novel” in progress, and (what else?) deep-fried, bacon-wrapped Tootsie Rolls. Enjoy! 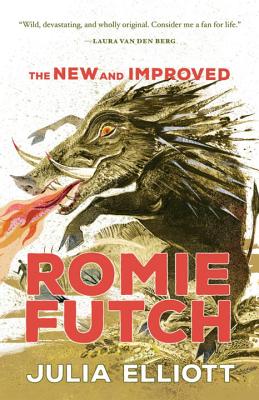 Q: How wrong would I be to think of “Romie Futch” as a story that fits right in with The Wilds, but just wouldn’t be contained at anything less than a full book?

You’re right on target here, as The New and Improved Romie Futch began as a short story that was too big for its britches. I sent it out. It got rejected, though a few editors remarked that the idea was interesting, but that the story was kind of bursting at the seams. After shelving it for five or six years, I read my cousin Carl Elliott’s piece “Guinea-Pigging,” originally published in The New Yorker, which describes the seedy underworld of pharmaceutical clinical research trials, particularly the subculture of test subjects who make these trials into a career. This inspired me to flesh out the research part of Romie’s story, all of the events that take place at the Center for Cybernetic Neuroscience in Atlanta Georgia. And so began the process of transforming a failed short story into a (hopefully) viable novel.

Q: You’re also still (of course!) writing short stories; “Bride” (published in Conjunctions last fall) was selected by T.C. Boyle for inclusion in The Best American Short Stories 2015 along with stories from Louise Erdrich  (read The Antelope Wife, people!), Ben Fowler, on and on. Is there something essential that separates a “short story idea” from a “novel idea” for you?

The two failed novels I wrote before Romie were sagging, bloated monster short stories that could barely walk. Romie, as explained above, rose from the ashes of a failed short story, and the architecture of the original piece helped me plot more fiercely and get the story moving. Through this process, I began to recognize the differences between stories that work as short pieces and narratives that require a much larger space to reach their full potential. For years I’ve been obsessed with writing a novel about a primatologist working with hamadryas baboons, and I’ve even attempted to start it twice, piling on scenes with no sense of momentum, evoking plenty of ambience, weirdness, character nuances, and haunting scenery, but no kinetic plot to lift these elements off the ground and hustle them along. Now, after two failed novels and a published novel, I think I’m finally ready to write my epic baboon novel. Novels, in addition to needing more time/space to do their thing, also require the long-term obsessive attention of the author, so that’s another way to tell if a narrative should be a short tale or a novel.

Q: I have to ask about your reaction to seeing “Romie Futch” in Oprah Magazine. It sounds almost like something that might happen in one of your stories. (As an aside, I’ve heard great things also about Eka Kurniawan’s Beauty is a Wound which is also in the feature, along with a darkly funny Drawn & Quarterly-published graphic novel, Killing and Dying. So it looks like an intriguing set of 10 books to check out.)

It felt surreal, like Romie Futch, caked in mud and pig gore, had entered a magical universe of gloss, perfume, perfect turkeys, and the enchantment of the seemingly immortal Oprah. It was particularly odd to see the tiny cover in there: the raging boar with blood on its tusks.

Q: For your next novel, you’ve been researching hamadrayas baboons at the North Carolina Zoo in Asheboro. I love those baboons, the way they have distinct personalities, sub-groups, self-imposed isolation (at least it seems that way), playful children, bright red bottoms. What surprised you the most about studying them?

You’re right about the self-imposed isolation of the one-male units. These baboons evolved to live in harsh semi-desert conditions, and through this process, transformed from relatively chill matriarchal savanna baboons into a paranoid, neurotic patriarchal species whose males keep “harems” (primatologists still use this anthropocentric term) and aggressively police their females. Because semi-desert terrains require smaller foraging groups, the one-male unit was the most viable solution: a big male around for protection, multiple females and offspring close by, all picking from a single sparse tree or clump of thorny bushes. As a women’s and gender studies person, I was fascinated by the ways ecology led to what even primatologists describe as “marriage” among these baboons—which boils down to the ownership of females for a significant  a span of time. To me, the most surprising (or at least interesting) thing about these baboons involves the ways their ecological environment has dictated their social structure and behavior, though many of these behaviors have become genetic traits that are now physically passed on (i.e., when the environmental conditions change, their behavior remains pretty much the same, though zoo baboons, who have a lot more time to socialize, develop some interesting quirks that you don’t see in the wild).

Q: You’re going to be teaching at the Shared Worlds Teen Writing Summer Camp next summer at Wofford College; who are some of the creative writing teachers (or influences) that you remember from your teenage years that helped you along the way?

Three teachers have made a huge difference in my life. My high school English teacher, Idella Bodie, who wrote adolescent fiction, encouraged an amazing amount of poetry-writing in class, and she really championed my work, no matter how lurid and sexually vivid it got. Later in college at the University of South Carolina, Professor Carolyn Matalene’s enthusiasm for my work gave me the confidence to apply to grad school. I was writing some freaky pretentious stuff full of arcane diction, but she saw something in it and encouraged me. And finally, when I went to grad school at Penn State, Paul West (who sadly just passed away) nurtured my maximalist experimental tendencies, my love of language and excess, in a time when minimalism was all the rage and “purple prose” was regarded as some kind of indecency (like an estrus baboon showing its putrid, swollen, garish butt). Paul even wrote a great piece for the New York Times called “In Defense of Purple Prose”.

Q: You can’t seem to get enough of North Carolina! In addition to your summer at the NC Zoo, you were here for The Wilds last December, and again just last month for the SIBA trade show. Any plans to check out the NC State Fair while you’re in town? (I tried the deep-fried bacon-wrapped Tootsie Roll, and can cautiously recommend it.)

I was born in Boone, NC, so I guess I’m a tar heel at heart. I’ll try the deep-fried bacon-wrapped Tootsie roll only if it’s stuffed with crunchy fatback and frosted with sugared lard.

This entry was posted in Coming to Town and tagged julia elliott, quail ridge books, the regulator bookshop. Bookmark the permalink.

One Response to Coming to Town: Julia Elliott for The New and Improved Romie Futch, at Quail Ridge Books and The Regulator Bookshop