Coming to Town: Marko Kloos, author of the Frontlines series, for HonorCon at the Hilton North Raleigh/Midtown

Marko Kloos is the author of the Frontlines series of military science fiction. Born and raised in Germany, Kloos has has been a soldier, a bookseller, a freight dock worker, a tech support drone, and a corporate IT administrator. A graduate of the Viable Paradise SF/F Writers’ Workshop, he now lives in New Hampshire with his wife and two children. Their compound, Castle Frostbite, is patrolled by a roving pack of dachshunds, colorfully illustrated as “a team of awesome space-merc dachshund outlaw heroes blasting their way across the sky” in the header image on his website.

The Frontlines series is set in the early 22nd century, where North American Commonwealth “welfare rat” Andrew Grayson enlists in the military “for a shot at real food, a retirement bonus, and maybe a ticket off Earth.” (The only other remotely plausible way out is by drawing a winning lottery ticket for a colony ship settling off-world, and that’s as remote as any lottery-winning dream can be.) We get to see both this all-too-plausible and too-near future Earth of grim poverty and ever-escalating action and space battles through Grayson’s eyes as he encounters the wonders and horrors of a Solar System-spanning conflict with the alien Lankies.

Kloos joins a fantastic lineup of military science fiction — including Taylor Anderson, David Weber, A.G. Riddle, David Drake, Tony Daniel, and Chris Kennedy — at this weekend’s HonorCon at the Hilton North Raleigh/Midtown, with individual day and full weekend passes still available. It’s a further escalation of HonorCon’s roots as a convention focused almost entirely on Weber’s Honorverse — complete with many attendees in full Royal Manticoran Navy uniform — into a truly full-spectrum military science fiction convention. (Though, still, certainly, with the RMN out in full regalia in full force!) I’m looking forward to catching as much of it as I can.

While Kloos was already getting rave reviews (and comparisons to Scalzi, Haldeman, and Heinlein) for his first two Frontlines novels, Terms of Enlistment (initially self-published, then quickly snapped up and republished by Amazon’s 47North) and Lines of Departure, it’s fair to say that his stature in the science fiction world was raised both by his Hugo Award nomination and by the grace and clarity with which he declined the honor. That’s one of the several topics in the following interview, conducted via email ahead of (just barely!) today’s “boarding action” and other first day festivities at HonorCon. Enjoy! 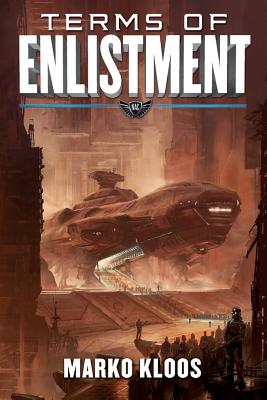 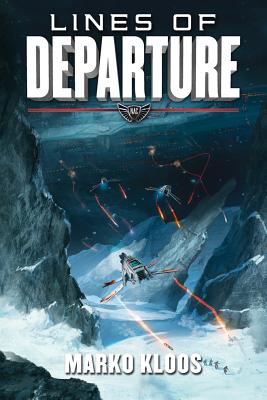 I’ve been a fan of the Honorverse books since On Basilisk Station, so yeah, you can say I’m familiar with it. 😉 One of my friends clued me in on the Honor Harrington books three or four novels into the series, a good while before I decided to get serious with my own writing. I have not however read any of the Safehold stuff yet.

Q: How did you get involved with this year’s HonorCon?

I was suggested and invited by Zach Perkins. I don’t know how the process worked behind the scenes, but I know that Zach came across the Frontlines books and liked them enough to contact me and ask about the Frontlines universe and maybe getting a fan cub off the ground.

Q: Sasquan, NYCC, Denver for an Air Force Academy event, HonorCon this weekend, ConFusion in January, you’re a busy author guest indeed! While being published by Amazon’s 47North has many advantages (Amazon.com and Kindle placement, daily deal features, etc.) it does limit your bookstore reach. Does that make conventions that more important as a way to reach out to your fans, old and new?

I’m not particularly upset about the bookstore thing, as the vast majority of my sales are digital anyway. Who knows—maybe I’d sell more in print if bookstores carried the Frontlines books? But the bottom line is that the dollars from e-book royalties are just as green as the ones from paperback sales.

But yes, cons are a great way to connect with fans and get the attention of new readers. In this genre, reputation and exposure rides on word-of-mouth. People who like the books will recommend them to friends, and that’s doubly true for people who like the books, have met the author in person and maybe gotten a book signed, and know first-hand that the author is approachable and not a total toolbag.

Q: Speaking of 47North, you’ve already got Chains of Command due out in April, the 4th “Frontlines” novel, and back in August you announced a new 3-book deal, including two more Frontlines novels. What makes 47North the right publisher for you at this point in your career?

47North is a small, but dedicated and professional team. They make things happen quickly, and the turnaround from finished manuscript to publication is phenomenally fast compared to other publishers. Then there’s the highly transparent accounting (monthly statements and royalties!), and the fact that I personally like everyone on the team. It’s a very familial setup, and they are invested in our relationship. Lastly, they stood in my corner during the Hugo kerfuffle and supported my decision to withdraw my nomination, even though it was the very first Hugo nomination for their house.

Q: When did you know that Angles of Attack would not be concluding a trilogy, but rather setting up not one but three (or more?) additional Frontlines novels?

I simply ran out of space while I was writing Angles of Attack. (The storyline in Chains of Command was supposed to be included in ANGLES, but I didn’t want to give that particular story short shrift, and I also didn’t want to deliver a monster 250,000-word tome.) The same thing happened with CHAINS—you’d figure I’d have learned to shorten my outlines a little by now!—and the overall Grayson/Halley story arc will be capped with Frontlines #5, Fields of Fire, which I am currently writing. The sixth Frontlines book will probably be more of a tie-in, told from a different point of view character, and then 47North will publish the first in what is going to be a brand new military SF series unconnected to the Frontlines universe.

Q: You’ve written clearly and eloquently on your reasons for withdrawing Lines of Attack from Hugo consideration last year, of your delight in both The Three-Body Problem gaining access to the final ballot and in being named the winner, and your regard for the “Alfie Award” which one Mr. Martin gave you at the Hugo Loser’s Party. Now two months removed from Sasquan, have you followed any of the ongoing conversation around next year’s nominations?

I haven’t followed the conversation beyond reading a few blog posts putting forth ideas for worthy eligible novels. I’m just hoping we can have next year’s Hugo shortlist without competing camps trying to out-game each other via slates. I won’t be on a slate willingly, and having seen how much undue weight slate nominations can have, I won’t vote for anything that’s on a slate. (Authors recommending worthy books to their readers for consideration isn’t slating. Authors telling their readers “Here’s a list, and vote this list exactly, please” most definitely is.)

Q: You were uncomfortable about being included as a Hugo nominee if it were due to overzealous block voting, particularly along (any) political lines; what about positive outcomes, like my (and others) buying your book having heard more and more about it due to the entire chain of events?

I wasn’t in control of the consequences of my decision, but I was willing to take whatever fallout would come my way. I got some grief for it, but overall people have been kind and supportive, and I can’t say I mind being better known as a result. It wasn’t a calculation I made when i decided to withdraw, though.

Q: Do you listen to the audiobooks of your books? (A friend who is an audiobook reviewer liked them quite a lot, which is funny to me as I noted when reading your favorite review of Angles of Attack that she also listened to the series in audio, and! linked to Bob’s website as well. Small world, as usual.)

I don’t listen to them from start to finish, but my wife loves the audio versions (and particularly Luke Daniels, who does a fantastic job), so I get to listen to quite a bit whenever she gets a new Audible version. My main reason for not listening to the audio versions as a matter of routine is the fact that Luke Daniels’ character voices don’t sound like the characters do in my own head, if that makes sense. I don’t want his interpretation to color my own image of the characters.

Q: I am sorely tempted to ask about the “soldier” portion of your author biography and how it relates to Frontlines, but! instead I absolutely must instead ask about your favorite German SF pulp serials, particularly (but not exclusively) if any are available in English translations. (As a side note, AmazonCrossing has been doing some fantastic work in bringing German and other world sf/f to English in the past few years.)

You’ll have to wait for the panel on that very subject on Saturday. 😉 My favorite pulp serials were the Perry Rhodan novels, written by a conglomerate of writers over the course of decades. To my knowledge, only very few of them were ever translated. AmazonCrossing was very interested in the German rights for the Frontlines books, but we ended up selling them to Heyne. I’ve not read any of the AmazonCrossing works coming the other way, but I hear good things about them, and I always welcome broader perspective (especially from non-American authors) on the U.S. SF market. That’s why I was very happy to see Cixin Liu’s The Three-Body Problem take the Hugo this year. It’s good for the readers who get exposure to different viewpoints, and it’s good for us authors because it keeps us on our toes and keeps us from getting complacent.

This entry was posted in Coming to Town and tagged frontlines, honorcon, marko kloos. Bookmark the permalink.

One Response to Coming to Town: Marko Kloos, author of the Frontlines series, for HonorCon at the Hilton North Raleigh/Midtown