Review of Domnall and the Borrowed Child by Sylvia Spruck Wrigley (Tor.com November 10, 2015)

This is a delightful Celtic fairy tale about what happens to the Sithein of Scottish fairies and their Cu Sith when humans have populated the entire area. Domnall is old enough to remember times when it wasn’t dangerous outside. He is tasked to find bluebells but creating a faerie ring has been deemed too dangerous so they are going to take the dew back home to use in the celebration.

Their community has become so small that all the younger fae are coddled and fussed over and Domnall thinks that’s the wrong attitude. He’s getting so ancient that it is hard for him to scout and he certainly doesn’t want to come back at dawn to gather dew from the bluebells he found.

Domnall returns from hunting bluebells to discover that one of their few children is very ill and must be switched with a human infant right away so she can have mother’s milk. It is the only thing which can cure her. Although he is exhausted, he of course agrees to go out after moonset to make the switch.

He makes the switch but something goes wrong and he must switch them back and find another source of mother’s milk. His quest to save the fae child sends him traveling about Scotland having adventures. 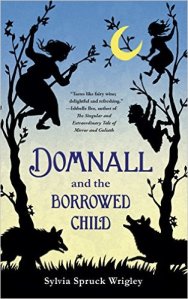 Domnall is an interesting ancient fairy who loves his people and their ancient ways, but he is also curious about humans and perhaps not as fearful of them as he should be. His supporting characters are a varied lot from forceful females to cowardly young fairies. He does realize over the course of the story that if he doesn’t like the way the younger fae have turned out, then he should try to exert influence on their training and attitudes so one of them will be as fearless a scout as he is. Complaining about the younglings but not offering to help will never lead to a good outcome. He repeatedly thinks that only the cowardly fae survived their last war.

The setting is a very well-described rural ancient Scotland, with the plants and types of houses and landforms you find there even today. It is clear the author has spent time in the Scottish countryside and loves it. The human characters are Christian but still hold some pagan beliefs, like in fairies switching out their infants. This is accurate for many sections of Scotland, Ireland and Wales. Even after the coming of priests and churches, many found no conflict between the ancient beliefs of the area and the newer teachings of the Church.

The story has the feel of one of the old Celtic fairy tales and we certainly hope more appear in the novella program. It’s like a tiny Celtic fantasy travel adventure with a setting rich enough to be an epic novel. This is a must-read for fans of Celtic fantasy!

Affiliate links: Buying from these links helps support both bullspec.com and your local independent bookstore: IndieBound (paperback, $10.99) and Kobo (ebook, $2.99).