Coming to Town: Okla Elliott and Raul Clement for The Doors You Mark Are Your Own, at Atomic Empire and So & So Books

When UNC-Greensboro graduates Okla Elliott and Raul Clement came back through North Carolina this spring in support of the publication of their debut novel The Doors You Mark Are Your Own (Dark House Press, April 2015) I was caught completely unawares — I have got to keep a better eye on The Regulator’s newsletter! Not so this time, as I’ve got both their reading tomorrow (Tuesday, December 22, at Durham’s Atomic Empire) and early next year (Wednesday, January 6, at Raleigh’s So & So Books) circled on my calendar.

The novel is in turns a postmodern bit of surrealism, an epic literary dystopia, and a Russian science fiction pulp. There’s the book’s fictional “author” (Aleksander Tuvim) and the fake “biographies” of our two “translators”, Elliott and Clement. There are marked-out passages, inset journal entries, footnotes, maps, a Dostoevskian cast of characters, revolutionaries, plagues, sibling rivalries, and subplots and tangents galore. And, at 724 pages, it’s only the first book in a planned trilogy set in the fictional future world of Joshua City.

Here, Elliott and Clement answer a few questions about the trilogy’s origins, their literary influences, the balancing act of side-plot overload, the book’s road to publication and its book design, and when we might expect to see book two. Enjoy! And see you at Atomic Empire tomorrow, where you can also pick up a wide swath of last-minute gifts. And there’s beer on tap. Just saying. 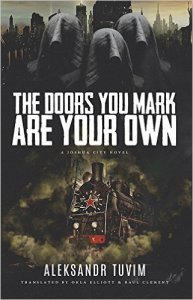 Q: How far back do the origins of The Doors You Mark Are Your Own and “Aleksandr Tuvim” lie? All the way back to your UNC-G days?

We met in 2004, while working at New York Pizza in Greensboro. Okla was a graduate student and Raul an undergrad. The idea went through many iterations. It started with a simple pitch, “Fyodor Dostoevsky’s The Idiot as set in Hollywood,” and then took on more and more elements of science fiction and postmodernism. Originally we envisioned it as something we called “The Platypusical,” which was an odd mix of stage play, musical, and film. Then it became a screenplay. We eventually realized the idea was too big to be contained in that form, so we made it into a novel.

Q: You were both just here this spring on your tour to promote the release of the book; how did this return trip come about, and why (other than the list of good beers on tap!) Atomic Empire for this reading? (I know Raul’s a long time local turned ex-pat, and I’ve held a couple of readings there in the past, but I hardly ever see readings there! It’s a fantastic space.)

It’s great to hear your endorsement of Atomic Empire. We were originally scheduled to read there in the early summer, but we had to push back the date due to scheduling conflicts. But the idea of reading at a place like Atomic Empire appealed to us, and they were still interested, so we rescheduled to coincide with a Christmas visit to North Carolina. Not only does this enable us to see our families, but we have also set up two other readings in NC (at So and So Books in Raleigh on January 6th and Scuppernong in Greensboro on the 7th).

Q: Delany’s Dhalgren, Danielewski’s House of Leaves, and David Foster Wallace’s Infinite Jest are the three novels that come to mind for me when I think about the foundational books of this specific branch of ergodic literature, with notes, journals, blacked out text, footnotes, books within books, postmodern metafictional conceits galore; but there’s been quite a spate of them lately, recently S. by Dorst and Abrams and Bats of the Republic by Zachary Thomas Dodson, and of course Danielewski’s now ongoing The Familiar. Are there other books that inspired you on this project, and why do you think we are seeing more of these fascinating and challenging books?

Of the three you mentioned, Infinite Jest probably had the biggest influence on this project. And both of us are huge admirers of Wallace in general. However, we were also interested in traditional science fiction and genre literature. Frank Herbert’s Dune, Walter M. Miller Jr.’s A Canticle for Leibowitz, and Stephen King’s The Dark Tower series come to mind. We wanted to provide the reader some of the intellectual and formal complexity of high postmodernism with the “fun” of genre literature. To that end, slipstream novels like Margaret Atwood’s Maddaddam Trilogy are also important models.

Q: Another undercurrent of book culture which intersects here is the “literary dystopia”, but yours highlights a tension that is fascinating to me: when is resistance and revolution and overthrow necessary, despite the destruction to follow, as your young revolutionary Nikolas believes, and how to balance these against the possible good that could still be accomplished “within the system” as Dr. Adrian Talbot urges. Is this a theme you’ve seen explored in other books?

Both of us have long been attracted to the major Russian novelists, such as Dostoevsky and Solzhenitsyn. Part of that attraction is the way they engage large philosophical questions through their characters. In The Brothers Karamazov, Alyosha, Dmitri, and Ivan offer competing philosophies and ways of living. These characters are in many ways archetypical, but they transcend mere archetype through the tremendous vitality of Dostoevsky’s writing. We hoped to do something similar with Nikolas and Adrian, using our much more modest writerly gifts of course.

So to answer your question, the theme isn’t borrowed so much from other books, but the technical approach to the theme may be.

Q: There are a lot of moving parts in this book. How did you balance your urge to explore interesting side roads with the need to advance the central stories and character arcs?

We had been thinking about this book for almost ten years. So naturally we had a surplus of ideas. While we wanted to make something big and sweeping (and we’ve been thrilled to be compared by reviewers to Hugo or Tolstoy), we were also wary of exhausting the reader’s patience. We were very careful to try to connect all of our subplots, at least on some level, to the central story. And within each story line, we tried to be as economical as possible. We’d like to think there is no scene that doesn’t have a clear purpose. In order to achieve that we cut hundreds and hundreds of pages, many well written or interesting but ultimately not germane.

Q: What can you tell me about this book’s journey to publication at Dark House, about watching the book design unfold?

We signed a contract with Dark House Press largely on the strength of a synopsis and the first two hundred pages. Dark House has been very patient with us, particularly considering the book came in about twice as long as predicted. They’ve also been on board with the idea of a trilogy from the beginning, which not many presses would have been with first-time novelists.

As for the cover art and design, George Cotronis designed the cover based on key elements we wanted to emphasize in the novel. Alban Fischer, who has designed many books for Curbside Splendor Publishing and Dark House Press, then took it to another level with the beautiful spine and interior design. The title pages are entirely his creation and they give us a little thrill of ownership every time we open the book, so perfectly do they capture the aesthetic and thematic essence of the novel.

Q: When is book two coming out?

We are hoping for late 2017, but that is tentative. Like the first book, this one may take on a life of its own and swell beyond our initial plans. One thing we don’t want to do is rush anything.

This entry was posted in Coming to Town and tagged atomic empire, okla elliott, raul clement. Bookmark the permalink.

One Response to Coming to Town: Okla Elliott and Raul Clement for The Doors You Mark Are Your Own, at Atomic Empire and So & So Books