This is the second Sin Du Jour novella (the follow-up to Envy of Angels), and continues the adventures of two intrepid chefs, Lena and Darren. Their lives are much stranger than those of chefs in normal New York restaurants; events catered by their employer are considered successful if no members of the staff are killed!

This adventure revolves around the wedding of the prince of the goblins to a normal human. This causes some political issues within the goblin community and a vastly complex menu for the catering company. It turns out that goblins are very beautiful, so many of the Hollywood crowd are goblins, and the King is none other than the musician/actor who had played the Goblin King in a certain movie (David Bowie passed away while Your Human Reviewers were reading this novella, and so made it particularly poignant).

The goblins can eat human food, but prefer other things which humans can’t eat, like gems and metals. This means two identical looking menus must be prepared so that the bride’s family and friends are not insulted, and the inevitable culinary confusion leads to a serious problem at the reception. We won’t give away what happens, but will simply comment that the title of the novella is most apt. We also love the lizard on the cover. He is very story appropriate, but you will have to read for yourself to know why! 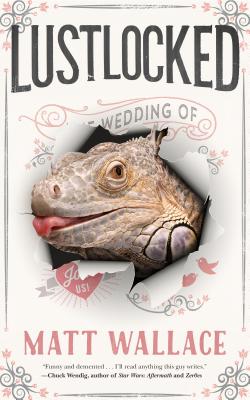 We also see the adventures of Sin du Jour’s stocking and receiving department in a bonus prequel story from the Tor website, called Small Wars. This provides some interesting history as to how the group got hired and how they function together as a team. In the novellas, we have seen them in action in the present where they exhibit the behavior of a team that has fought together in many battles. They all have unusual personalities which are explored more in the short story. This actually makes them much more interesting and now we are wondering if Lena and Darren are going to discover any of their “secret origins”.

Lena and Darren’s friendship is explored more in this novella and we see their relationship to the other Sin Du Jour employees changing as they spend time together. We actually see magic done for the first time in this setting when we see White Horse saving people with Native American magic. This depiction was quite respectful of the myths and beliefs of White Horse. His relationship with his very modern granddaughter, Little Dove, is realistic and amusing. They clearly love each other very much, but like to poke fun at the other’s beliefs and activities. Some of their exchanges were hilarious.

Matt Wallace has penned another entertaining adventure with humor, family relationships and some wild activities from the stocking and receiving department. For some great humorous urban fantasy, read this series!

This entry was posted in The Exploding Spaceship and tagged matt wallace, tor.com. Bookmark the permalink.

One Response to The Exploding Spaceship Reviews Lustlocked by Matt Wallace