Review of The Ballad of Black Tom by Victor LaValle (Tor.com, February 16, 2016)

This novella is a Cthulhu Mythos story set in 1920s New York. The New York depicted is from the viewpoint of a young black man named Charles Thomas Tester. Tommy Tester is a hustler or conman because he saw his father work at an honest trade for a Negro’s wage and get ripped off repeatedly by the white bosses. Tommy learned to play the guitar like his father, but his singing voice is not nearly as nice as his father’s.

Tommy gets drawn into the situation because he delivers a package to Flushing and realizes that away from Harlem his bad playing and singing might not be so bad. He soon decides to go to Flatbush with a guitar he bought with the money earned from the delivery errand. This leads to further work at a party for a wealthy man.

The wealthy man practices the arcane arts and Tommy is soon drawn into his sphere of friends and business associates. He encounters a private detective named Malone who is also a practitioner of the arcane. Malone tries to warn him that his involvement with the wealthy Robert Suydam will have consequences but Tommy fails to heed the warning. Suydam is the target of an investigation by Malone and the NYPD so when Tommy joins him, it draws Tommy and his family into the investigation. In 1920s New York, no Harlem family wants to be the subject of an investigation by the white policemen because someone from Harlem always ends up dead, injured or in jail. 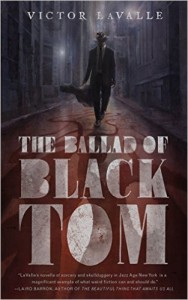 The fallout from the raid on Tommy’s home sends Tommy back to Suydam’s place and he gets drawn into a larger arcane working to bring the king sleeping at the bottom of the ocean awake. As all readers of Lovecraft know, it is NEVER a good idea for humans to wake him. Humans greedy for arcane power keep trying, but it only leads to disaster. This time is not any different.

However, the setting in New York with all the different ethnic people, the NYPD, and the crowded streets of the inner city mixed with the arcane working, make a fascinating tale of mystery, murder, strange friendships and monsters. New York feels very vibrant and alive, with interesting inhabitants. Although Tom is a hustler, you can’t help but like him at the beginning of the tale. Suydam is a mystery man, but he doesn’t appear to be dangerous at first, just a little eccentric. You think that Malone is the bad guy in the tale at the beginning but when the climactic scene is reached suddenly everything is a surprise. Your Humble Reviewers won’t give away the final scenes but will just comment that the plot twist at the end is worthy of the most convoluted Lovecraft tale. The entire story has a slight creepy undertone to it if you are familiar with Lovecraft tales, but if you don’t pick up some of those clues then the final scenes could be quite a shocker.

This is a great Lovecraftian tale which reads much easier than the originals!