The Exploding Spaceship Good SF Reads: The Prison in Antares, Silenced, and Mothership

Nathan Pretorius hasn’t even healed completely from the previous mission before he and his team are sent off on a new one. The stakes are high for the Democracy because many die every time the Coalition uses their Q-bomb. A Democracy team came up with a defense but Coalition forces killed all but one of them and then kidnapped the survivor!

So Nathan is tasked with getting this man back into Democracy hands at all costs. They play a massive game of double-cross and find the cup (room) containing the pebble (man).

This volume has them taking several spaceships, using some strange local transport, searching a planet wide computer net for maps so they can find their way around a mining and prison planet, doing an extraction of the kidnapped scientist more than once, and of course fighting both on the ground and in space. 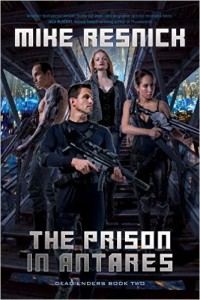 This team of crazies is very entertaining! One of the most enjoyable series we have read recently. All the characters are extremely different from one another as well as being unique and not stereotypes. The diversity works to their advantage because of all the different locations, disguises, and problems their work requires. It has very descriptive text and so it’s easy to visualize all the costumes, aliens, weapons, and ships. The setting has many complex cultures and two very different political groups, although there are internal issues within the groups as well.

Science fiction adventure readers should definitely pick up this series. It is old school space opera but written with characters of modern sensibilities, so everyone can find someone on the team with whom they can identify. None of the characters have problems with those not like them, and their attitudes do not belong in the 1950s. This series would make a great manga and/or anime. 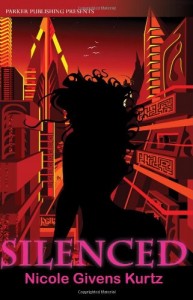 Cybil is a private investigator in a Washington, DC which is a half-ruined city due to the wars and breakdown of government. The US has split into territories with no central government. Cybil has a trainee named Jane who is related to the Mayor of the area surrounding Memphis. Jane’s cousin goes missing and Cybil (against her better judgement) takes the case, knowing that Jane’s personal involvement will cause problems. As much as she dislikes personal cases, she likes Jane enough to want to find her favorite cousin.

We get a short glimpse of a dilapidated DC metro area before the action moves to Memphis. Memphis has some tourist business because it is a safe area compared to adjacent districts, but it is still a very poor area with collapsing structures and nasty hotels. Both cities have some familiar landmarks but also have a great deal of destruction. The rivers through both of them add to their issues because of the wet and dampness they bring in the winter.

We meet the local version of the cops, called regulators, who have not been able to find Jane’s cousin, Amanda. The media has depicted her as a good girl, but it soon becomes clear that she was a rebellious teen who went off without telling her mom any details and had some questionable friends and lovers. Investigation shows that several regulators and Jane’s Aunt Belle are involved in something illegal and not very pleasant, so Cybil and Jane have difficulties staying on task because of all the nastiness revealed by their investigation. So basically, we see government and politics haven’t changed much even though things have splintered into regions.

Eventually Cybil sorts out what and who happened to Amanda, but not before several gunfights, a few fistfights, some odd encounters and a fancy fundraiser have occurred. The encounters are well choreographed and the scenes vividly described. Cybil is a damaged hero (almost everyone in this universe would be a damaged something) turned private investigator. Although the setting is rather dark, in some ways it is hopeful too. No one seems to notice the race of other people and differences in significant-other preferences don’t appear to be an issue either. So we have a truly diverse future set against a half-destroyed United States. The plot was sufficiently complicated and twisty that it drew Your Humble Reviewers in and kept us from guessing what would be revealed next. We would love to see more mysteries from this author as the plot twists and hidden relationships kept us turning the pages!

So it’s a post-apocalyptic mystery with politics and family issues thrown into the mix! For mystery readers who like a little science fiction thrown in, this is a good read. 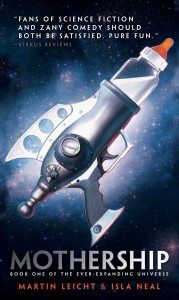 A school for pregnant teenagers on an old spaceship orbiting Earth, hot male aliens, ugly aliens, and a ship-wide disaster make for a crazy space adventure. This is a very funny book, chock-full of B-movie sci-fi tropes, but which also takes a serious look at the issue of teen pregnancy. The alien invasions and old spaceships make an interesting backdrop for a story about teenage mothers having to leave their families and friends. Most of the girls had boyfriends who disappeared so it was also about young love and how dealing with a pregnancy makes the love issues seem very different.

Elvie and Ducky are best friends and remain so even when she is sent off to pregnant teen school. Ducky is an important supporting character and he actually seems to be the least idiotic of the teens depicted. Poor Cole was the stereotypical gorgeous-but-dumb-as-a-brick male, but other sides of him become apparent when it all hits the fan. The girls run the gamut across types, but those we see in more detail are interesting and not strictly to type. We even get a bad alien that you feel sorry for.

The volume has so many silly action movie tropes and mini-plots in it that Your Humble Reviewers don’t want to give the funny away; pick it up and read it yourself. Some favorite points were the physical comedy of ready-to-pop teens crashing about in zero gee, the love of vending machine food, and Elvie’s insane level of mechanical skill.

The story ends on a cliffhanger so we will be looking for the next volume. If you like humorous SF and can deal with teenage characters then this would be a hilarious read for you.

One Response to The Exploding Spaceship Good SF Reads: The Prison in Antares, Silenced, and Mothership