The Exploding Spaceship Reviews Pieces of Hate by Tim Lebbon

This story consists of two parts, Dead Man’s Hand and Pieces of Hate. They are The Assassin Book One and Book Two. The assassin’s name is Temple and he is pursued by Gabriel, whose origin story is told in the second book. The stories are set in the town of Deadwood in the Dakota Territory during the late 1800s, and on a privateer ship and in Port Royal, Jamaica during the 1600s. There are flashbacks to hundreds of years before this to Gabriel’s life in Wales.

When Gabriel was living in Wales, his family was horribly murdered and it put him in a bad spot when confronted by the conjurer/assassin who did it. He follows any clues he can get to the location of the conjurer and is destined to chase him until he gets his revenge. Each place he finds Temple is where someone sent the assassin to kill someone famous. In these two stories the assassin’s targets are Wild Bill Hickok and Henry Morgan.

The first story is told from the viewpoint of a young shop owner named Doug who meets Gabriel in Deadwood when Gabriel comes to kill the conjurer called Temple. By this time period Gabriel and his horse look like Death because the wounds he gets when he fights the conjurer don’t heal properly and when he is near him the scars burn. Each fight results in a new scar.

Weird things began to happen in Deadwood involving dead people and dark magic. Gabriel fights Temple and when they both leave town Doug’s life goes somewhat back to normal and he lives out his life there, always on guard for more dark magic conjurers. 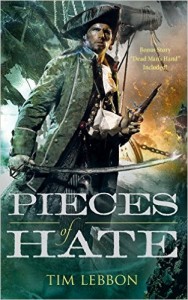 During the 1600s Gabriel gets passage on a privateer ship and meets a clergyman named Sparks when he follows the conjurer to Port Royal. The ship and its crew have an adventurous journey but eventually arrive in Jamaica, where they discover that Temple and his target have both left town. They follow in order to try and save Henry Morgan. They catch up with Henry, his crew, and Temple. A big battle ensues and Temple goes overboard.

Since the two tales are in reverse chronological order, the reader knows that Temple is not dead and that Gabriel will confront him many more times. Due to the long lives of Temple and Gabriel, it is almost like a time travel tale because they have been in every time since near the dawn of civilization. Each setting feels vibrant and alive. The technology level changes and differences in clothes, occupations and culture make even the different Gabriels unique. Over time people change so when you have two immortals they would change even more than most characters because of the long timespans involved. Gabriel is certainly the same character in the two tales, but he isn’t at the same time point so there are some major differences in the two versions of him. It will be interesting to see how he differs in future stories.

These are far more interesting than most historical fantasy. They have just enough weirdness and magic to make it clear that it isn’t actual history but an alternate one with magic. Gabriel is a very tortured hero who is seeking revenge, but this isn’t just a typical revenge story. Gabriel ends up trying to save the people Temple is trying to use and kill, and sometimes he succeeds.

If your tastes run to darker stories and you like historical fantasy, then definitely give these tales a try!