The Exploding Spaceship Reviews Every Heart a Doorway by Seanan McGuire

Review of Every Heart a Doorway by Seanan McGuire (Tor.com April 5, 2016)

There are many fantasy stories about young people who travel through portals to other lands, but none quite as interesting and unique as this story set in a school for young people who have returned from such journeys. The descriptions of clothes showed their uniqueness, and by looking at their colors and styles you could get a good idea of the type of world they had visited. It was clear that it helped new student and protagonist Nancy sort by visual shorthand the other students who might understand her; it made the school seem very vibrant with wildly different color palates and styles. Each student was a distinct character but the styles of dress helped sort the cast of characters into factions quickly so as to avoid confusion over the large number of people. Nancy’s encounters with each student gave details about them individually. The story has many interesting and complex characters that are all suffering and trying to find others who will understand that suffering. In many ways the characters are typical teens, but their travels have left them feeling more out of place even than their siblings.

It was heartbreaking to realize that what Nancy’s parents did to her carefully packed suitcase was a common occurrence with new students. That one action told you all you needed to know about her parents and what they thought of her and her experiences. All the students needed someone to understand them and it was quite clear that the older students and the faculty at Eleanor West’s Home for Wayward Children fill that need very well. 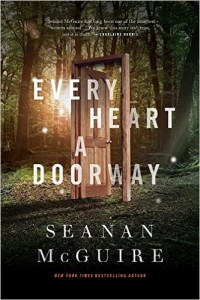 A murder mystery within a closed setting like a school always has interesting dynamics as everyone realizes one of them had to have committed the horrors. This one had added craziness because people were constantly trying to search for a door back to their world and the students who had traveled to different types of worlds didn’t understand each other very well. Nonsense-world visitors and Logic-world visitors both looked at the other group as suspicious because they didn’t understand the other group. In addition the adults were hoping to screen the underage students from danger but as the killer struck in various locations it became clear that was not possible.

Some likable characters were killed off of course because it was a multiple-murder mystery and others found their door back to their world but several students are still there at the end of the novella. Your Humble Reviewers look forward to seeing what new students appear in the next story and what type of adventure this disparate cast of characters will get into next.

All readers who like school stories, portal adventures or urban fairy tales like those of Charles DeLint should immediately go and buy this novella!