The Exploding Spaceship Reviews The Emperor’s Railroad by Guy Haley

The child’s viewpoint really worked for this story. The boy’s admiration for the knight is quite clear, the descriptions really making the knight seem larger than life. His love for his Mom was clear from his description. His descriptions of his world and the attitudes of people in it (like being educated-sounding meant you got teased) were written in a way which made it clear that he knew nothing else, that this was just the way of the world. His world was so sad and full of death and destruction that you immediately empathized with him. Having to go to battle to defend your town at age twelve and it getting overrun would get any journey off to a bad start.

The trip across the bridge was terrifying, the creaky, nearly falling down bridge combined with the dead chasing them and heading towards a dragon made us concerned poor Abney or his Mom were going to meet a horrible end!

The situation for the Mom in regards to being safe from men and being forced into marriage was definitely a post-apocalypse situation which we could understand given the limited number of people and the power of the wealthy in this setting but was not welcome in our reading material even so. Same could be said for the implication that children would be sold into slavery if they could be forced away from their responsible adults. 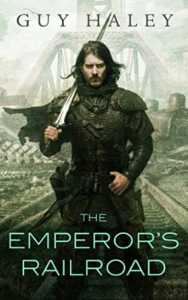 The cities, towns and abandoned buildings they come across on their journey all add to the feeling of a mostly destroyed world now ruled by angels and infested with zombie-like people who died and came back to life. The ultimate fate of Abney and his mother was sad, but Quinn just rode off to the north still searching for what had shamed him. Quinn’s story isn’t done so perhaps we will see him again and learn who he is looking for in Columbus, Ohio.

This story has a very bleak setting with mostly destroyed towns, men damaged by war, a dragon rampaging one area, and awoken dead rampaging most of the southeast. It is vibrantly described without being too bloody and disgusting. Quinn is the most interesting character. He reveals some of his past to Abney, but still kept most details a secret. Abney is described best as a twelve year old, older Abney is narrating but you don’t get a good picture of him. To Abney this is the story of the most important and life-changing portion of his life so everything else is flat and uninteresting by comparison, so he gives his current self little attention in the narrative. Abney’s mother is his hero and he describes her that way even if some of her actions are questionable. He tries to view Quinn as a hero but Quinn discourages this because he won’t take Abney with him on his quest to right his shame.

Overall, this is a rather depressing journey story about Abney and his mother’s travels to reach her cousin with help from Quinn who is on a larger quest which isn’t completed in this tale. It is very entertaining and exciting but very dark. If grim-dark is your thing, then this is a great read for you.