This is an urban fantasy set in Prohibition-era Chicago with a very vividly described real-world history which includes bootleggers, mobs, and the turf wars between different factions. The main character is a very old detective of the supernatural who is actually in Chicago to guard the gate between our world and Feirie.

Nick is cursed to always guard the gate because, as Saint George, he slew the dragon guarding the gate. Now that dragon is part of Nick and it wants to escape, so he has to fight mobsters and Feirie folk backing Oberon as well as his internal dragon. Nick has a traditional period view on women, but his friend Claryce has other ideas and she always gets her way. Every time she doesn’t it leads to disaster so Nick learns to let the woman make up her own mind and stop trying to put her out of the action. Several times she saves him which makes him realize that she is destined to be involved and help him, regardless of his wish to save her from the death suffered by her previous incarnations during his 1600 years.

He has a companion named Fetch who is a werewolf who can’t turn back into a human. When he is near Nick and a few other Feirie folk he can talk, so he likes to be near Nick. He is able to go places and observe then report back to Nick, greatly expanding Nick’s spying and observation capacity. Oberon has allied with several mob groups in order to further his own agenda so it is important to keep an eye on his activities to determine when he is going to move. 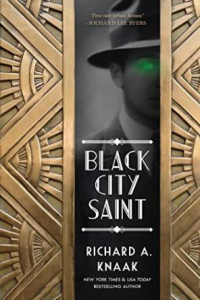 Nick has a sword gifted to him by the Lady of Feirie which helps him fight the nasties which have been leaking through the gate. Without the sword he, Claryce and Fetch would have died several times. They also have the help of several other support characters like priests and an honest policeman.

Chicago is detailed with real buildings including several churches and some buildings under construction. Nick’s house has been magically protected so that no one notices it, so it is the point of some interesting scenes when people go there. The violence and alcohol issues of this period make it a great setting for an urban dark fairytale. This rendition of Saint George and the dragon is very different from the usual depictions and he works well as a flawed hero who is serving out a punishment. The dragon is quite a sneaking and conniving fellow as is to be expected of him and this version doesn’t disappoint even if he is stuck inside Saint George. The supporting characters are interesting and not really what you would expect for the time period and setting, so they are a nice surprise there. Claryce is almost more of an assistant than a girlfriend because Nick is so scared to get involved. She is a working woman who is very strong physically and mentally so the Feirie elements don’t really faze her. Nick gets more surprised by her than she does by him, once he explains the situation.

The fight scenes are a combination of period guns, knives, and swords, with magic gauntlets and some magical creatures thrown in as well. It works out well with the reader seeing the limitations of one type of attack against the other.

This is a fast-moving story with a dark creepy feel to it set in a Chicago Your Humble Reviewers would definitely not like to visit. We hope to see more of Nick and his friends! 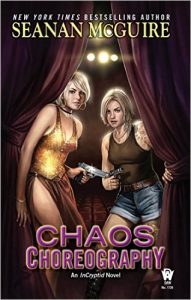 Verity Price is back! The tough, street-smart cryptozoologist has returned and this time she’s on a dance reality show called Dance or Die. The contestants didn’t know it was going to involve them actually dying though, so there is much mayhem, blood, fighting, magic, and creeping around old basements so Verity can keep herself and her fellow contestants alive.

The mysterious Grandma Alice finally makes an appearance and Verity’s husband Dominic plays an important role. Between the last book and this one they eloped to Las Vegas en route to the Portland, Oregon area where the Prices live.

Verity has help from some non-human allies she met while dancing on the show previously, and meets some new non-humans who help too. She and her allies make an interesting flea market trip to get weapons and stumble across an old friend of Alice’s.

There are some great scenes on the dance stage both of dancing and fighting. The nasty magician even goes bonkers on the stage for the last big battle. The combination of Verity’s free-running skills and the backstage area make for some epic scenes.

This is one of Your Humble Reviewers favorite urban fantasy series. The whole science basis for the non-humans appeals to we science geeks. The books all move very quickly, much like their heroes. The background is extensive and feels like our real modern world with a few strange things around the next corner. This is the fifth volume and we hope they don’t stop anytime soon!