This vibrant fantasy novella deals with friendship and family when betrayal occurs. Sima and Lin are trapped in a space far below the floor after being drugged. A fight among the adults goes on above and the actions of Sima’s father cause great destruction and many deaths. The girls try to escape with their lives and some of the jewels to which lapidaries can speak. However, things don’t go well because soldiers arrive and search among the rubble. 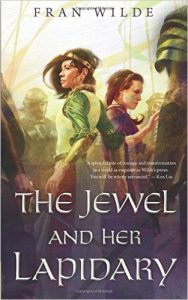 The setting has beautiful descriptions of costumes which are brightly colored, have long veils for young women, and include many bracelets and jewels. Young men wear chainmail, but also chains, and gems. The women are not educated, so Lin and Sima must sneak to learn about the world through overhearing gossip. They are veiled at age 11 until they are engaged to be married. Lin is highly sought after to be a wife because she is a Jewel and this ultimately saves her life at least temporarily, but females in the royal court don’t have very pleasant lives in this world. Even the woman military leader they meet is a harsh, unpleasant woman who lives just to get her son married to a Jewel. The girls are just starting to discover kissing and holding hands. Regardless of her initial actions Sima shows that she loves her Jewel very much by her final actions in the vase.

The novella is a fast reading short fantasy set in an unusual culture with feudal political system. The young characters show growth and change even over the less than 50 page tale. We liked the ending and Lin’s fate. This is definitely a good take on power-hungry people getting what they deserve! 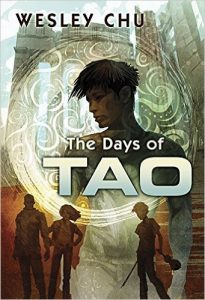 Review of The Days of Tao by Wesley Chu (Subterranean Press, May 2016)

This is a novella about Cameron Tan’s adventures on his first solo mission. It leads into the next series of novels about the Prophus/Genjix war. After five years he’s still a university student because he made a bad grade in Art History and so is hanging around Greece doing a summer-abroad program.

Suddenly Prophus contacts him because he is the only operative within range of an agent who has vital information which must get out of Greece. But the Genjix are locking Greece down and getting out won’t be easy.

This is complicated by Cameron’s loyalties to his classmates. He could leave them behind but he is sure that they would all die. So sacrifice your friends, including a potential girlfriend to save an agent who has data about how the Genjix are going to start the war, or slow down the escape and take them with you.

Good agent or good person? Cameron isn’t a mindless adult Prophus drone yet, so of course he takes his friends along. They end up making a backroads run for the coast, but to get there they must get through several traps and fights. The situation at the beach where their supplies have been stashed is not as it should be. Has one of his classmates betrayed him? Could he be leading them all to their deaths? Cameron is filled with doubt and indecision, which makes him not think as clearly as he should. After the one betrayal in the earlier novel he is more aware of it, but that doesn’t stop him from walking into it anyway.

Tao tries to help of course and is his usual snarky self, trying to teach Cameron, but Cameron is stubborn just like his dad, which makes for a persistent agent but a very annoying student. He manages to survive and so does the agent. Cameron’s dad Roen shows up at the very end and wants to go for pizza of course! 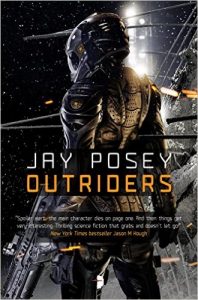 Outriders are a unique military unit which recruits Captain Lincoln Suh to be the team leader; a very secretive unit since Captain Suh had never heard of them before he was recruited. It’s sort of a military version of Mission: Impossible: they get sent to far-off places to sort out big messes and they might not make it home.

The setting is a future where Mars and Earth have a very strained relationship so war could easily be precipitated by an unexplained attack. The bad guys attack several people, places and stations. The Outriders are tasked with figuring out which group of fanatics is behind the attacks. They do old-fashioned electronic data gathering but they also go places and see for themselves, even sometimes behind enemy lines where just their presence could be considered an act of war.

The bad guys are few in number, but make up for this by having very advanced tech which can fool everyone else’s tech. They use it to confuse everyone into thinking the other planet is sending their forces in to attack. Captain Suh and his team have to fight them with smarts, spaceships and really cool flexible armor.

As Suh gets to know his team, so does the reader. They are all distinctly different in appearances and skill sets, which makes it easy to separate them in the narrative. Their boss, whom they have nicknamed Mom, is a likable but irascible older officer. Their missions help bond them together and Lincoln Suh manages to earn respect from his team and from Mom, but not without some serious worrying and guilt about events.

The story moves at breakneck speed and shifts between three main viewpoints: Suh, a bad guy, and a victim of the bad guy. The victim, Piper, was a tech wizard on one of the stations that was destroyed but was put in a pod by her boss and so was the only survivor. She spends most of the book dealing with the bad guys from captivity.