Review of A Whisper of Southern Lights: The Assassin Series Book 2 by Tim Lebbon

This volume revisits Gabriel’s fight against Temple the demon which we saw in a previous novella (Pieces of Hate). Now time has passed so the two are enduring World War II and are in the Pacific theater.

A soldier who had encountered Temple leaves a message behind and tells his best mate where to find it. Gabriel searches for this soldier in the Japanese prison camps and eventually finds him. This leads to a harrowing race against Temple through the jungle. 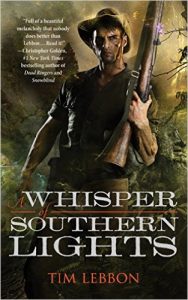 The scene descriptions leave nothing to the imagination regarding the horrors of war. And particularly when Temple is involved even hospitals, doctors, and nurses are not safe. There are several battles depicted as well as some marches and the race through the jungle. All these are detailed and make you feel like you are there. You feel sorry for the soldiers who encounter Temple and get in his way as well as feel for Gabriel who is still on his tortured journey following Temple through time. The secret that Temple and Gabriel learn in this story will likely impact their futures, but it is not clear exactly how. We will be interested to see what happens in future volumes.

A dark, war-filled time travel tale with a strange protagonist and a nasty demonic villain. An excellent choice for lovers of grim-dark.

This entry was posted in The Exploding Spaceship and tagged tim lebbon, tordotcom. Bookmark the permalink.