Tony Daniel writes YA alternate history in which the Vikings and Spaniards colonized America instead of the English. The story is set in the Shenandoah Valley of Virginia. Wulf is a 16-year-old who is the third son of the Duke, so he is not even the spare heir. He is trying to figure out what he wants to do in life and he has a great love of history and reading but he has been trained as a warrior since he was small and so can’t decide. He has the normal issues of a teen: trying to figure out his career choice and females, then discovering that love doesn’t follow your parents instructions on who to marry, even if that would be a good alliance.

He leaves the castle on a hunting trip with his father and they get attacked. This leads to Wulf having a leadership role he never thought possible because his brothers aren’t there. He has to step up and take his father’s place and organize the allies and the strategy for battle against the invaders. He also has to deal with a foster sister/cousin who seems at first to have more in common with their enemies than with the Duke’s family. 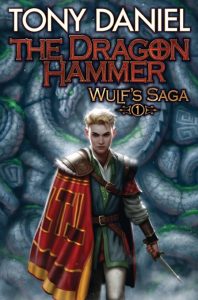 The setting is wonderful and rich, with recognizable geography from Virginia and even some familiar animals and plants. The magic is interesting, with all types of half-human animals who are sentient, a magic tree which talks to Wulf telepathically, and some vampire-like telepaths who perform blood rituals. Wulf, his family, his servant faun Grim, and all the half-humans he meets are all more than cardboard with some conversations revealing quite a bit about the society, relationships and religions.

It is definitely not a society we would want to live in, but it is a very rich fantasy setting which is an interesting place to visit!

We see Wulf change and grow up quite a bit in this volume and look forward to the next one, where hopefully he can get his love life sorted out. 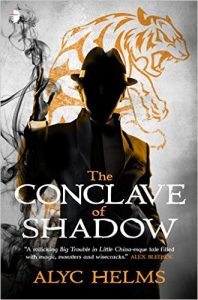 Review of The Conclave of Shadow by Alyc Helms (Angry Robot, July 5, 2016)

Your Humble Reviewers loved the crazy family relationships which caused no end of problems and mysteries in this book. Other characters not being aware of the relationships also lent some interesting complexity to things. The Asian-American flavor of the book was done well, with the main character having to deal with Chinese gods who in some cases have very traditional views. Mixing superheroes and Chinese mythology meant we were very happy to find this series.

Having not read all of the previous volume due to Day Job overload, we were concerned about being lost but there were just enough what-happened-before explanations to not feel lost nor feel that the story was dragging. It moves very quickly and is actually quite short. We wished for more of Missy’s adventures when we had reached the end.

The San Francisco setting in this volume makes you feel like you are there, particularly in Chinatown. Having been there several times and wandered the streets on foot, it felt like we could see where Missy was and could envision the businesses she was visiting.

The superhero with the coat and fedora hiding in shadows made us think of older pulp detective/superhero stories like The Shadow and Doc Savage, but everything has a modern, more feminist feel to it. So the setting and plot feels retro but the characters are very modern and in many cases female. Also, there were no characters who don’t like others based on race, gender, or sexual orientation, which is a much-needed change from the older stories.

If you like dark detective or superhero stories then this is the series for you. We will be looking forward to more stories!