Alexander Drake is an investigator for hire in a dark city called Lupenwald, which has a Victorian technology level and resembles England in some ways. It has commoners and nobility, a strong pub culture, and different factions fight over who is the rightful king. Most of the adult men at the time of the story have served a few years before in the army of one side of the other in the most recent battle over the throne.

Drake is a commoner and does not work for nobility unless the money is very, very good. He takes this particular case because he gets nabbed off the street by some thugs who bring him to someone who is working for a nobleman. The job offer comes with a big pile of gold so he isn’t too resistant to investigating the death of the man’s father. The man’s death is much more complicated than it seems at first. Every piece of evidence Drake turns up seems to lead irrevocably on toward a solution which makes no sense.

Drake ends up making some discoveries about his client, the client’s family, and eventually about all nobility, which changes his entire world view. This knowledge could pose a danger for him so it will be interesting to see how many nobles try to kill him in later adventures! 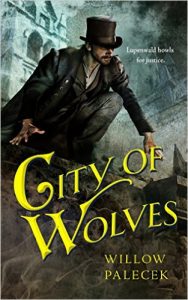 Drake is a rather disreputable bloke, and so a grey character. He has honor of a sort but isn’t above some sneaking about and under-the-table money-changing. He does pay his debts though, and deals fairly with his clients.

The setting is dark and somewhat creepy, with many dogs and wolves present. Magic is shown to be available for hire (by the rich, at least), but no magicians are present in the story. There are reasons for the canine influence which are unknown to the reader or to Drake until the end of the tale. The city feels alive and lived in by too many people: dirty, smelly, and grimy. The pub Drake goes into on the first page, the Stool and Rooster, feels like a nasty dive in the worst part of town. But since he is almost broke, it is a cheap place to get a drink.

It was an easy read which was done in one sitting and was just the right length to give a break from the day job; it would be the perfect length for a commute by train or bus. There are not really any female characters of any importance and so it’s difficult to tell about the treatment of females by the society. Drake seems to respect them, but you don’t really see other characters interacting with females much. Perhaps this will be explored in future cases.

Overall this is an enjoyable Victorian urban fantasy within a world which has obviously not been explored completely in this short tale, so Your Humble Reviewers look forward to future cases featuring Drake and some new clients. 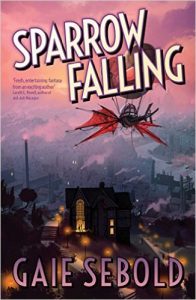 Eveline Sparrow is a school teacher now, which is quite a change from her former days as a thief and scoundrel in Shanghai. She has relocated to England and founded a school for girls like her younger self. Both her foster mother and her biological mother live there, too, and the two of them can never agree on anything. She has to constantly remind them that the pupils will not respect her if they hear one of the older ladies dressing her down. This makes for a rather stressful life for Evvie, and the bill collectors arriving about the butcher and grocery bill don’t help her stress level.

Evvie realizes she must do something to bring in some money. She decides the best thing is to offer security services to rich people whom she knows are a bit shady. Her first mark turns out to be a bit shadier than she expected and he employs someone who knew Evvie before she become a school owner. Both of these facts lead to a much more complicated situation than Evvie had envisioned.

Her best friend Liu, who is half fox god, gets involved and this leads to the other Folk being involved too. They end up using a changeling to prevent a kidnapping which would have started a war with Russia. The Folk world and the normal one tend to mirror each other more than the Folk would like to admit, so unwary humans can do the bidding of Folk and cause a disaster in their own world.

The houses and buildings Evvie visits are detailed and each have a different feel but the city of London as a whole does not really play as a backdrop. The setting is more on a local scale which follows Evvie about, with the journey to new places not being very important. Because Your Humble Reviewers have lived in London, there was no problem following the sections of town being discussed, but for US readers not so familiar with the city, the setting would seem rather vague and jumpy. More detail of the city as a whole would be helpful in understanding where the school’s location and the location of other buildings fit into things; even just a map would be very helpful. The characters at one point require a vehicle to reach their destination, which could be rather puzzling to Americans who don’t get the scale of everything, nor the idea of constantly clogged streets even though there are no automobiles yet.

The various students, Evvie, and both of her moms all living at the school made for a lively home situation, and everyone playing off each other gave details about each character. Evvie gives the reader some information via her thoughts and fears, but conversations and loud complaining by one of the moms gave much more insight into the situation.

Not having read the first Evvie book turned out to not be much of a problem as this volume is a much different type of story, apparently. She is an interesting character but seems a bit stunted romantically. It is unclear if she is supposed be that way or the author just didn’t want to deal with it in this volume. Most ordinary needs like food and drink, clothing, and housing are discussed, but the lack of romantic partners was odd. Perhaps future volumes will address it.