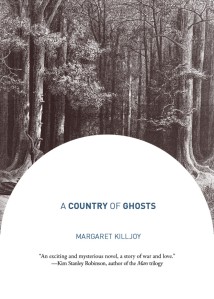 A Country of Ghosts
by Margaret Killjoy
Combustion Books, 2014

Subtitled a book of The Anarchist Imagination, Margaret Killjoy’s A Country of Ghosts is more appropriately a work of anarchist speculation. Structurally a Utopian novel—someone from a society very similar to the statist systems we’re all familiar with travels to a Utopia and is told how things work—we can count this book as a “hard” utopia. There’s no quantum computing or frictionless engine that makes the economy go, and the people living in the anarchist confederation of Hron have found themselves in the crosshairs of the Borolian Empire.

The story itself is rather simple: Dimon Horacki grew up rough but managed to become a journalist in the imperial center. He’s embedded into a troop of invaders and tasked with writing war propaganda disguised as reportage.  He’s captured by a Hron guerilla group, but this being an anarchist utopia and Horacki being a cynic about empire, capture equals freedom. Horacki changes sides and casually explores Hron and its many villages. Much of the book’s middle drags a bit, as Horacki asks Hron people how this or that issue (child labor, prison, whatever) is resolved in an anarchist society, and then gets fairly lengthy, definitive, and uncontested answers. But who can sit down and explain, say, banking or the powers of the President or the state of the class struggle without simplifications and errors and arguments and corrections? The world is too complex to explain, ever.  The details work better than the exposition; when Horacki runs out of tobacco and realizes that he’ll never have any more because it’s not grown in Hron, and there’s no trade with non-anarchist societies, we learn much more about the political economy of Utopia than we do from page-long conversations between characters. Horacki’s memoiristic narrative also doesn’t feel properly journalistic—Killjoy is a decent writer but not quite a great one, so having a writer-protagonist was not the best idea.

Despite its didactic elements, A Country of Ghosts isn’t quite an outline of how an anarchist society might work—for one thing it takes place in the equivalent of the nineteenth century, when the state was relatively militarily and ideologically weak. No aerial superiority, no digital surveillance, and no expansive welfare state designed to persuade the putative left that government can work for the common good.  The art of nationalism was in its infancy. I found myself wondering repeatedly how this story would play out in the twenty-first century.

Hron, for its part, is an interesting society based on mutual aid and an accord of which nobody can quite remember the details, except that the spirit of the accord must always hold precedence over the letter. (There are lots of cute bits like this in the book. It’s a trick to avoid mapping out the details, but a funny one.) On pain of shunning or battering, jerks self-exile to Karak, which Horacki describes as “a town of street kids, all grown up.” But Hron needs Karak now, as only there can someone build a factory or experiment with exotic military arms if they wish to, and boy do they! And Karakians are jerks; when they join the war against the Borolians, who have established various Free Corps, they call their own troops the Freer Corps. Manarchists and brocialists, man.

This final third of the novel is gripping, both politically and narratively. Hron is outnumbered and outgunned, and are seemingly hamstrung by their broadly green anarchist, anti-industrialist, beliefs.  They can’t conquer an empire, but they can raise the costs of imperialism in the hope of preserving their enclave. Horacki’s injuries take him out of the war and give him an ending for his book, and gives the reader much to think about. I wish the war had started sooner, or the book ended later, as this vision of anarchism needed a hotter crucible. But A Country of Ghosts was entertaining, its politics intriguing, and the setting is a place I found myself missing after I turned the last page. 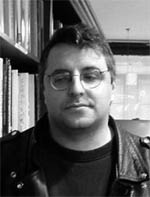